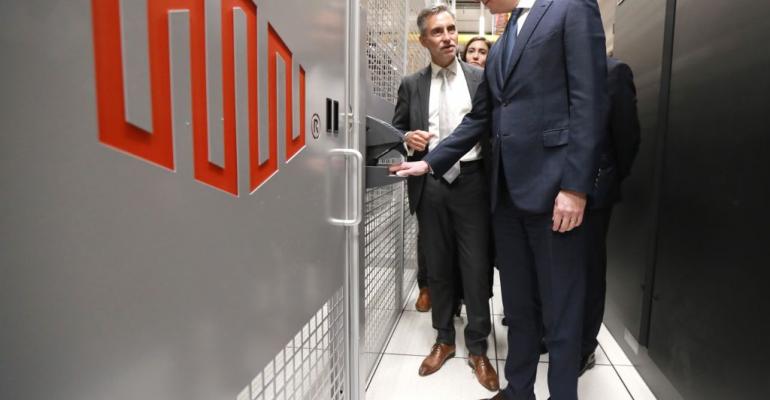 Why Data Center REIT Stocks are Outperforming This Year

DCK Investor Edge: A mix of macro-economic factors and sector-specific tailwinds led to a strong first half.

Strong second-quarter result, solid bookings, and strong balance sheets to fund development pipelines have made data center REITs an outperforming sector on the stock market this year, but not without influence of wider-reaching factors.

Yield-starved investors have been bidding up REITs of all sorts, and a rising tide lifts all ships. A rate cut this year by a dovish Federal Reserve and expectations for additional interest rate reductions are also part of the story.

Near-term concerns of a potential global economic slowdown should not impact data center operators in most US markets directly. In fact, the digital economy appears more attractive to investors, given recent global events and GDP trends.

There is no shortage of macro issues to keep investors up at night, but here are three big ones weighing on global markets:

1. The impact on the global economy from a no-deal Brexit or a last-minute deal with the European Union is impossible to predict.

2. Chaos surrounding the escalating trade war between the US and China. (Another round of tariffs was announced this week, now including consumer goods imported from China; final approvals for a new 8,000-mile Google and Facebook-funded submarine cable linking Hong Kong to Los Angeles are now in limbo.)

Additionally, global supply chains are being disrupted, with companies seeking alternatives to manufacturing in China and importing goods from there.

3. Sovereign debt in Germany and Japan is being bought and sold at record-low, negative interest rates, contributing to an inverted yield curve in the US, which often precedes a recession. In fact, the US 30-Year Bond interest rate recently broke below 2 percent for the second time ever. This last occurred in 2008, in the beginning of the Great Recession.

It is against this backdrop that REITs, including the data center REIT subsector, are top-performing.

Real Estate Investment Trusts are often viewed as a bond substitute, because they must pay out at least 90 percent of taxable income as dividends, which currently average 4 percent across all asset classes. In a low-yield environment, where the US 10-year Note is only yielding 1.5 percent, REIT yields become highly attractive to income-focused investors.

The demand for data center space is not tied to GDP growth, consumer confidence, population growth, or unemployment like demand for traditional REIT products, such as office, retail, multifamily, net-lease, and industrial. Technology-oriented REITs like data centers and wireless towers provide space, power, and connectivity to customers that colocate their equipment and pay rent for the privilege. 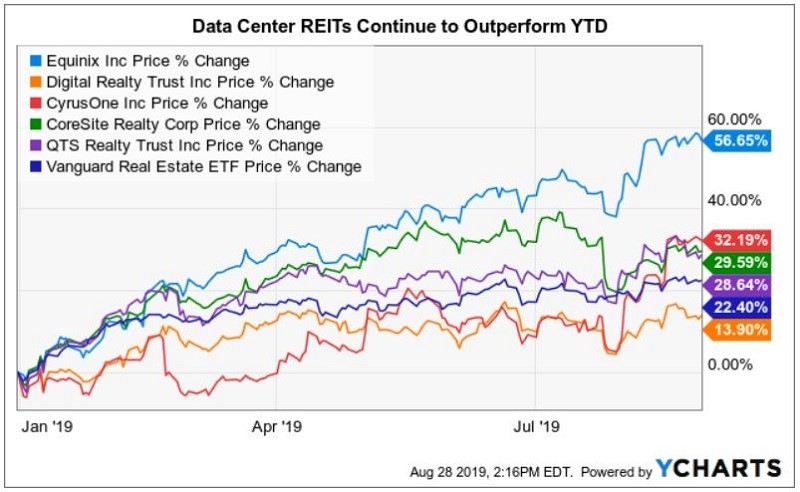 Tariffs on imported goods from China should not directly impact most data center operators, but US expansion by some of the large Chinese cloud, social media, and ecommerce giants could be put on hold.

Equinix is an outlier at the top of the chart with 56 percent price appreciation. The company reported a solid quarter, and the global interconnection moat continues to grow as Equinix layers more products and services onto its software-defined ECX Fabric. After the quarter, five investment banks bumped the Equinix 12-month price target 10 to 15 percent higher, from $542 to $580 per share.

Equinix shares were severely beaten down at the end of last year, trading in the $335-to-$350 range. The 12-month performance for EQIX shares now is a solid 28 percent, more in-line with its peers.

Ironically, the relative strength of Digital Realty shares at the end of 2018 has resulted in sector-lagging performance so far this year.

Its shareholders were not exposed to gut-wrenching double-digit price declines during the global equity sell-off at the end of last year. In fact, Digital was less volatile than Vanguard Real Estate ETF (VNQ), which invests across all REIT sub-sectors: 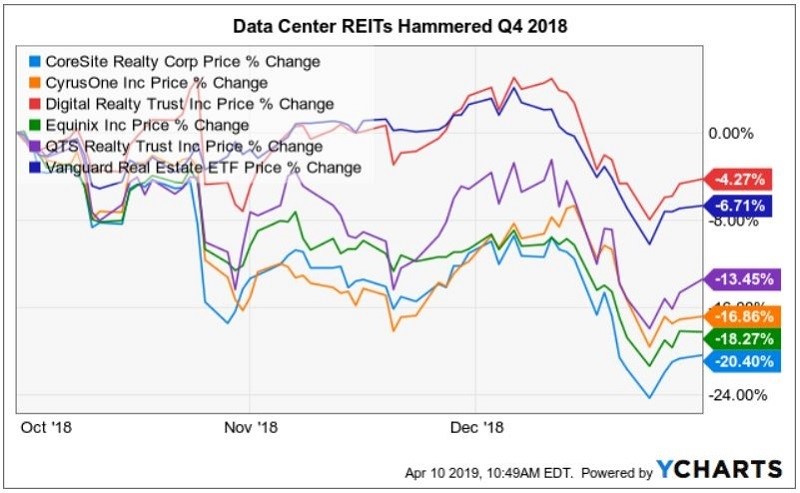 Digital Realty's stellar track record of growing earnings and dividends since its 2004 IPO – including through the Great Recession – gave shareholders the ability to sleep at night during the fourth-quarter 2018 data center bloodbath.

CEO Bill Stein's management team has grown dividend distribution for 15 consecutive years. Clearly, many investors value the lack of volatility and a steady hand at the helm.

Stein was with GI Partners (Digital Group) prior to the Digital Realty IPO and served as chief financial officer and chief investment officer prior to being named CEO in 2014. Digital's current CFO Andy Power came aboard in 2015. Notably, Power had been involved with Digital Realty as an investment banker, working closely with Stein since Digital's 2004 IPO.

Technology REITs have been among the top performing sectors all year long, and last week was no exception. 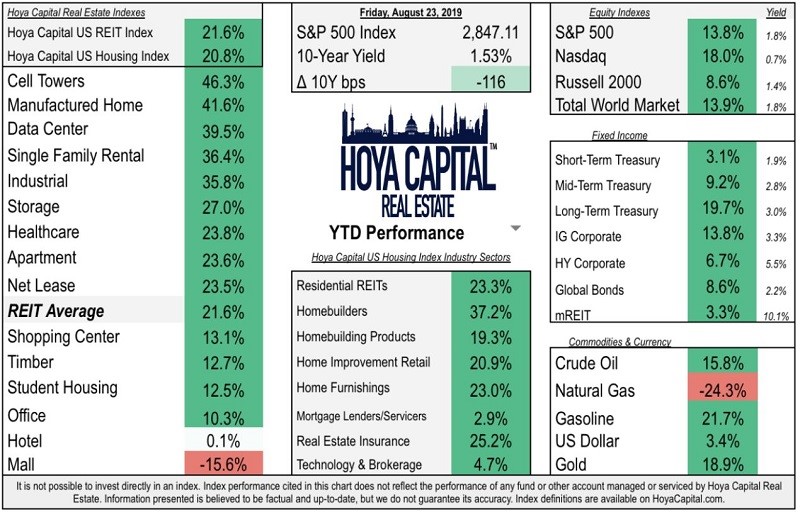 In a volatile and uncertain global economy, data center and tower REITs represent a nice combination of growth and income with less exposure to tariff tantrums than many other real estate asset classes.