DCK Investor Edge: The trade war opens the door to taking advantage of China’s cloud boom at a discount.

As the trade war escalates, however, there may be a silver lining for investors in being able to take advantage of the cloud computing boom in China. That domestic cloud, internet, gaming, and ecommerce giants dominate the Chinese market isn't particularly newsworthy. But the significant market share they have garnered across the broader Asia-Pacific region is worth a closer look – especially given the recent actions by US regulators to limit access to chips and other key components for several Chinese companies. 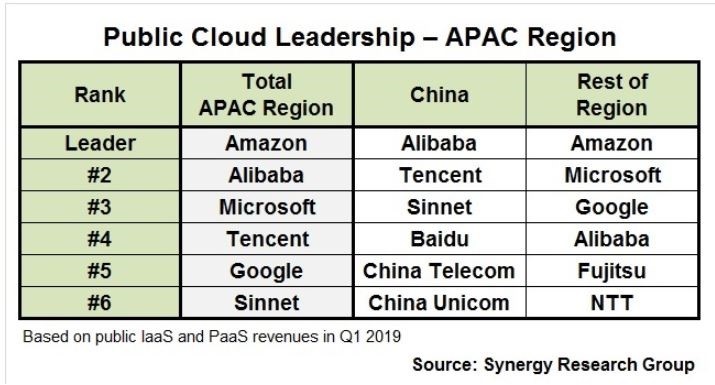 Cloud market share in Asia Pacific stacks up like a layer cake, alternating between American and Chinese players: Amazon, followed by Alibaba, followed by Microsoft, followed by Tencent, followed by Google, followed by Sinnet. An honorable mention goes to Baidu, which Synergy ranks as number-seven APAC-wide.

"While China remains a very tough proposition for the world’s largest cloud providers, who are all US-headquartered firms, the Chinese cloud providers are riding on the back of huge growth in their local cloud market," said John Dinsdale, a Chief Analyst and Research Director at Synergy Research Group. "Language, cultural and business barriers will cause some of those Chinese companies to remain tightly focused on their home market, but others are determined to become major players on the global stage. Putting China to one side, in the rest of the world Alibaba is already the seventh largest player in public IaaS and PaaS markets."

Unable so far to resolve the conflict, US and China dig in, and many investors are looking for ways to minimize damage from the global crisis but also to take advantage of it.

The S&P 500 top sector is now shifted from Technology to Real Estate. High-quality US real estate is viewed as a "risk-off" safe haven by many investors. The US 10-Year Note interest rate just dipped below 2.4 percent – the lowest it’s been since October 2017. This makes publicly traded REIT dividends even more attractive for investors. Notably, REITs are required by law to pay out at least 90 percent of taxable income, and some sectors with longer-term leases are viewed as bond substitutes (with a potential bonus of rising distributions).

There is another investment strategy to consider here: find a way to take advantage of the growth of the Chinese digital economy. Investing in Shanghai-based data center provider GDS Holdings, which trades on Nasdaq, may be just the ticket.

GDS is the largest provider of data center space to China’s cloud, internet, gaming, and ecommerce giants. Its footprint has been growing like a weed to support its top customers.

Notably, the GDS ADR (American depository receipts, which foreign companies use to trade on US markets) do not pay out a dividend distribution.

Currently, its earnings per share are negative due to the expense and long lead times required to develop such a massive amount of data center capacity (this creates a lag between deploying capital and receiving revenues), but GDS CFO Dan Newman expects the company to become profitable in 2021.

A proxy for Chinese data growth, GDS will benefit from secular demand drivers including cloud, AI, big data, 5G, IoT, and so on. Because of these secular trends, the trade war shouldn’t have much of an impact on demand for data center space and power by domestic tech giants.

And, GDS doesn’t face the extremely high barriers to entry (and barriers to growth) in the Chinese market that foreign providers face. 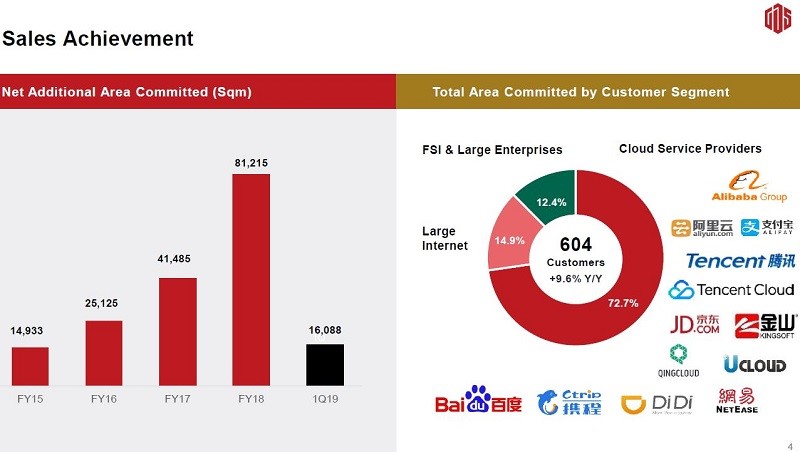 The US-based data center REIT CyrusOne has a strategic relationship with GDS, including a seat on its board held by CyrusOne CEO Gary Wojtaszek, who discusses the relationship on every quarterly earnings call.

Like any other investment decision, retail investors should perform due diligence and consult with financial advisors regarding the risks and suitability of owning GDS shares.