DCK Investor Edge: To maintain its current growth rate, GDS needs a lot of debt and equity capital. Having a strategic investor like Ping An helps.

Limited data center space in top-tier Chinese metros should bode well for Shanghai-based GDS Holdings. Meanwhile, the recent strategic investment by Ping An, which company executives discussed on the latest GDS earnings call, is a much bigger deal than most US investors realize.

GDS operates wholesale data centers, with campuses concentrated in and around China's tier-one markets, including Beijing, Shanghai/Kunshan, Shenzhen/Guangzhou, and Chengdu. Additionally, it has built a campus for a hyperscale customer in Hebei.

GDS is both carrier- and cloud-neutral, allowing customers to connect to all major telecommunication carriers in the country from its data centers. Last week, the company announced the launch of Amazon Web Services Direct Connect at its Shanghai and Shenzhen campuses. According to chairman and CEO William Huang, "the deployment of [the US cloud provider’s] access points within our facilities marks another milestone for us and gives our customers multi-choice access to world-leading cloud solutions, enabling them to scale their connectivity."

Why the Ping An Deal Is Huge

In China, it can take 15 months to deliver greenfield data center space. Last year, GDS signed commitments for 180MW of data center capacity – almost doubling its portfolio. Maintaining this pace of growth will require access to large sums of equity and debt capital. This is where having an investor/customer like Ping An makes a big difference.

In conjunction with a secondary share offering discussed on its recent earnings call, GDS revealed that Ping An has made an additional $150 million investment through a convertible preferred share issue. In an email exchange with Data Center Knowledge, GDS CFO Dan Newman gave us additional color regarding this transaction:

"Ping An has been a financial investor in GDS since 2013. What changed recently is that they started to become a very significant customer due to the expansion of Ping An Technology and the fintech and healthcare ecosystems which they have developed. Ping An has extensive real estate holdings and is also involved in every part of the financial services market. With this strategic investment, we will create synergies in various areas." 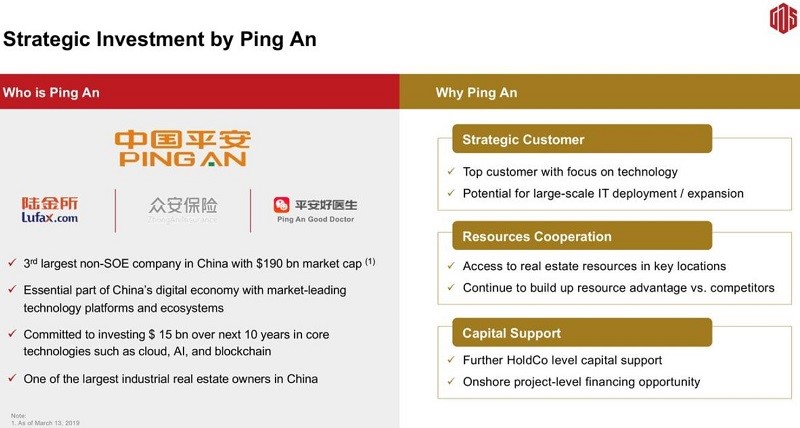 Newman added: "In China, Ping An is a very influential and respected company. It is the third largest non-state-owned enterprise, behind Alibaba and Tencent. I don't think there is an equivalent in North America." 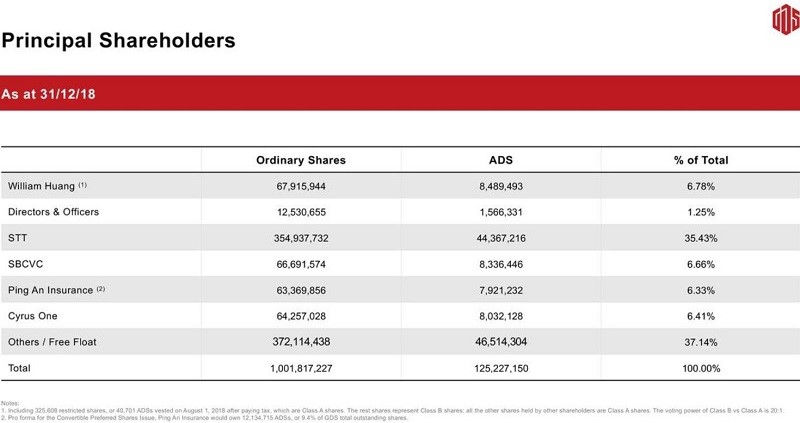 Newman confirmed that Singapore-based STT GDC, GDS’s largest investor, provided another $213.5 million out of a total capital raise of $610 million. STT is also a strategic investor, along with China-based SBCVC, and CyrusOne.

In addition to providing capital, all these strategic investors can either directly or indirectly help GDS to be a preferred data center provider for their portfolio companies and customers. Notably, SBCVC counts Alibaba and Taobao (Asia's largest ecommerce site) among its 22 TMT portfolio companies. SBCVC also has portfolio investments in 14 healthcare firms and a dozen enterprise companies, ranging from engine manufacturing and logistics to cement and lithium ceramic batteries.

Investors in GDS Holdings will benefit from the exponential data growth at some of China's largest companies, many of whom are already its customers. Additionally, ultra-high barriers to entry (and limited competition) have created an environment where demand for modern data center space exceeds supply in China's top markets.

During the earnings call, Huang told analysts, "In order to strengthen our development pipeline and maintain our resource advantage, we have started to acquire land in strategic locations on the edge of the big cities. This is a long and complicated process, as it involves identifying sites which work for our customers, have the right telecom network connectivity, sufficient developable area, and power capacity, and where the local government is supportive. Availability of land and power is still a major barrier."

An advantage GDS has compared with US-based data center REITs is that it’s not required to pay a dividend on its US-listed ADSs (American Depository Shares). GDS is free to invest all its recently raised capital into success-based Capex, increasing headcount, and expanding infrastructure to support its massive data center development program – which is currently fully funded, according to Newman.

Notably, due to funding this mammoth building program, GDS is not currently generating operating cash flow. However, revenues and operating income generated as data center projects are completed and leases commence should resolve that situation over time.