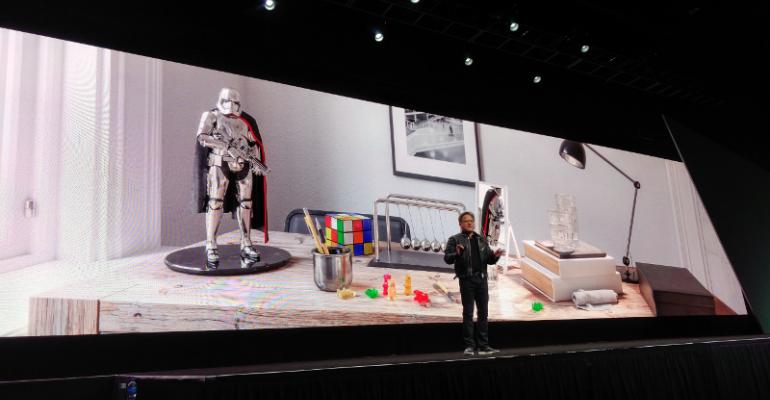 Nvidia Falls After Predicting a Decline in Crypto Chip Buying

Ian King and Jeran Wittenstein (Bloomberg) -- Nvidia Corp. reported quarterly sales that topped expectations, although a bigger-than-anticipated portion of the demand for its powerful graphics processors came from the volatile cryptocurrency market.

While the chipmaker generated $289 million in sales to cryptocurrency miners in the first quarter, that revenue may fall by two-thirds in the current period, Nvidia said. It was the first time the company had specified sales connected to the cryptocurrency market -- and shares declined as much as 3.8 percent in extended trading.

Nvidia founder and Chief Executive Officer Jensen Huang said sales of its graphics chips to gamers, the company’s biggest market, remained strong. Revenue in the fiscal second quarter will be about $3.1 billion, the Santa Clara, California-based company said Thursday in a statement. That would top the average analyst estimate of $2.95 billion, according to data compiled by Bloomberg.

Huang’s company has jumped on trends that are changing computing, like the high-end chips data-center operators rely on to underpin heavy workloads required for AI tasks such as machine learning, image recognition and language processing. At the same time, Nvidia can hardly keep up with demand from gamers looking to upgrade their personal computers, partly because cryptocurrency mining is diverting high-end graphics-chip cards.

“Crypto miners bought a lot of our GPUs in the quarter and it drove prices up,” Huang said on a conference call. “I think that a lot of gamers weren’t able to buy into the new GeForce as a result.”

The shares slipped to a low of $250.27 in extended trading after reaching a record $260.13 at the close in anticipation of strong results. The stock has gained 34 percent this year, making it the best performer on the benchmark Philadelphia Stock Exchange Semiconductor Index. The company’s market capitalization has jumped to $158 billion, from just $30 billion, in seven quarters.

First-quarter results at the Santa Clara, California-based company were strong. Net income rose to $1.24 billion, or $1.98 a share, in the period, from $507 million, or 79 cents, a year earlier, the company said. Sales jumped 66 percent to $3.21 billion. Analysts on average had projected profit of $1.46 a share on sales of $2.9 billion.

Data center revenue rose 71 percent in the period to $701 million, beating some estimates for $653 million. Sales from gaming, which represents more than half the company’s total revenue, were up 68 percent, to $1.72 billion, beating Wall Street projections of $1.55 billion.

Nvidia benefited from a better-than-expected market for personal computer sales in the first quarter as well as other indicators that suggest a “still-tight” gaming card market, according to B. Riley FBR analyst Craig Ellis.

Cryptocurrency-related sales have gained attention as prices for digital coins have surged in the last several years. Susquehanna’s Christopher Rolland projected Nvidia would generate about $200 million from that business in the first quarter, according to an estimate before the earnings were released.