GDS Holdings, the top data center landlord for hyperscale cloud platforms in China, continues to hit the cover off the ball with new bookings.

The Shanghai-based data center operator reported 57MW in capacity leased by customers in the last quarter, including three 10MW-plus deals with existing customers and a new logo belonging to a hyperscale video streaming service, which signed for 9MW in a single location.

GDS builds and operates data centers for everybody from Alibaba, Tencent, and Baidu to Huawei and the Chinese partners that run infrastructure for Amazon Web Services and Microsoft Azure. 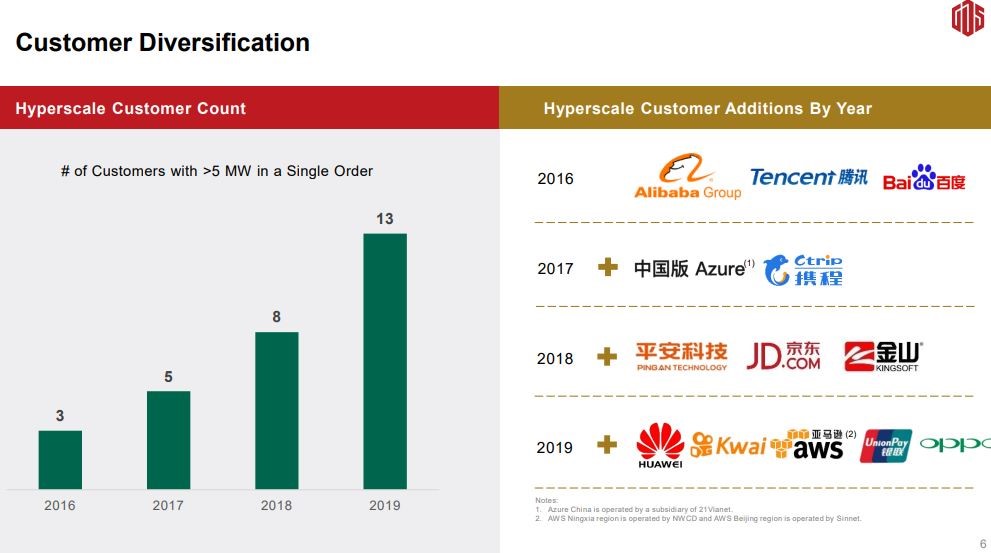 The GDS customer list has grown over time to include many of the largest cloud, software, gaming, and ecommerce names active in China. These are high-growth companies that are highly likely to continue expanding capacity deployed with GDS over time.

It is reportedly getting more difficult to build additional data centers in the urban cores of major Chinese cities.

GDS has had to look at more remote, suburban locations to service the growth of its customer base. On its third-quarter earnings call last week, the company’s founder, CEO, and chairman William Huang discussed this "edge-town" strategy:

"We continue to have some success organically and supplement our capacity with acquisitions. However, it is not nearly enough to satisfy our customer demand. We have therefore evolved our strategy to include largely edge-town sites.

Our first major move was in Langfang, on the edge of Beijing. This is already proving a great success. Within a couple of quarters we have commitments from three different hyperscale customers for 100 percent of three data centers: Langfang 1, 2, and 3, while we still have inventory of land and power in Langfang."

"We are moving rapidly to secure even more resource. We aimed to repeat this success in other Tier-1 markets. In Shanghai, we got approval today for new downtown capacity. In addition, we are purchasing more land near our established edge-of-town site in Kunshan.

We have also obtained substantial power capacity on the edge-of-town site in Changshu. The power plus land at these locations will support around 90,000 square meters of new capacity.

In the Greater Bay Area, we have power plus land at a location near Guangzhou. We have leased shell buildings at two other locations near to our existing data centers."

GDS is also moving ahead with its plans to expand in Hong Kong. Huang announced purchase of an existing building to retrofit into a future Hong Kong 2 data center located within 150 meters of Hong Kong 1, which GDS acquired one year ago. In addition to "proven demand" from Chinese hyperscale customers, Huang sees an opportunity to support the data center requirements for over 200 Chinese financial institutions in Hong Kong.

Notably, GDS expects to develop and/or acquire about 860,000 square feet of data center space in 2019. Management believes the company will need similar or greater-size expansions in 2020 and in 2021.

Despite the torrid pace of new development and acquisitions, GDS’s operating and financial metrics are continuing to improve. 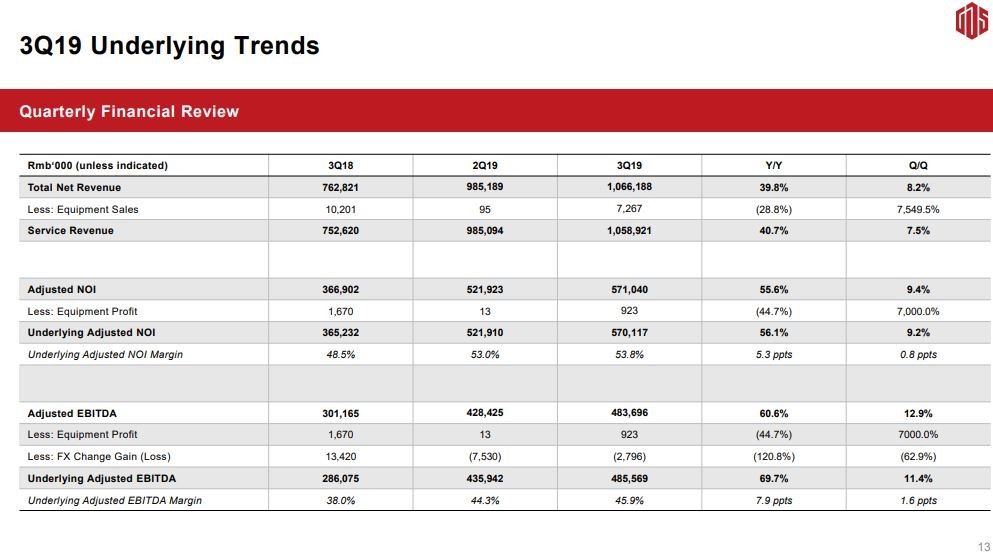 Notably, the increase in adjusted EBITDA margins was even more impressive – a 790 basis point improvement year over year. Additionally, Newman said that operating leverage from the fast-growing data center portfolio could boost this metric by another 200 basis points next year.

During the Q&A section of the earning call, Huang described the sector tailwinds saying, "The digital economy represents 15 to 16 percent of China's GDP, and this growth rate is around 8.5 to 9 percent. That means [the] new economy, very clearly, is already being a new engine or driver in China economy."

The relentless demand for data center space by China-focused hyperscale customers contrasts with the reduced bookings across the top US markets this year, where after record bookings in 2017 and 2018 hyperscalers have been digesting the capacity they have gobbled up.

Meanwhile, there are still plenty of massive data halls and powered shells immediately available and under construction, primarily in Northern Virginia, the biggest market, being offered for lease by a dozen major developers. Additionally, Microsoft, Google, and Facebook all have large owned campuses across Virginia able to support hundreds of megawatts of future development.

On the call, GDS management explained the reasons supply-demand fundamentals in major Chinese markets are a different story.

In a nutshell, high barriers to entry in the Chinese market ensure that all but a handful of private-sector data center providers can acquire land with entitlements, crucial power allocations, and access to the electrical grid.

GDS appears to be well-positioned when it comes to entitled land and power for future developments in and around tier-one cities in China. The number of GDS hyperscale customers continues to grow steadily, while enterprise cloud adoption remains in the early innings.

It is simple for US-based investors to participate in this growth story. GDS ADSs (each ADS is equivalent to eight Chinese shares) trade on Nasdaq. Notably, since the third-quarter earnings announcement, the price of GDS shares has continued to trade higher.