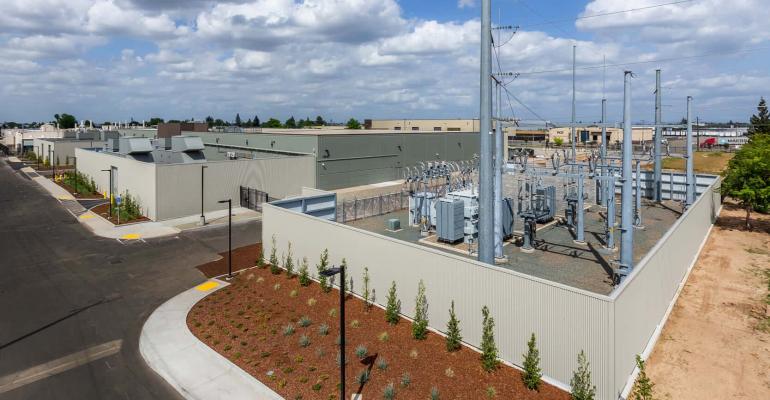 Prime Data Centers
The electrical substation in McClellan Park, outside Sacramento, where Prime Data Centers has built the first building of what it hopes will eventually become a data center campus.
Business>Investing

A developer leverages a new federal tax break to market Sacramento as a cheaper alternative to Bay Area.

In 2001, the US shut down the McClellan Air Force base outside Sacramento – a move the region had fought for years, which then ended up costing the area some 25,000 jobs. Now the site is being set up as a business park, and some investors are hoping to use its designation as an Opportunity Zone and its proximity to the Bay Area to promote it as a home for data centers.

The site’s Opportunity Zone designation, a relatively new federal tax break for certain types of investment in economically stressed areas, has started being promoted only this year. “It takes a bit of education, and is very difficult to understand,” said Hoch Cho, chief investment officer for Prime Data Centers, who said he’d spent 100 hours learning about Opportunity Zones.

“I’ve probably burned double that in lawyer hours, because it’s very complicated,” he said. “But because of that time, we can discuss it in simple terms with potential partners.”

Sacramento as a Data Center Location

“Sacramento is on a very stable tectonic plate, with a low risk of earthquake. The Bay Area is seismically active,” he said about the region that’s home to Silicon Valley and a thriving data center market about 120 miles south of California’s capital. “What people don’t realize is that Nevada is seismically active” as well. (Nevada has seen a rise in data center construction in recent years.)

Due to the former McClellan site’s previous function, there’s abundant power. “Unlike a lot of places, we have power,” Cho said, describing a 50MW substation expandable to 150 MW for the 38-acre campus. “If someone wanted to come in here, they don’t have to go get that power.”

Moreover, the power is economical, Cho said. Power in California tends to be more expensive than in most other states due to a large extent to the state’s getting rid of coal generation and prioritizing renewable energy.

The Sacramento Municipal Utility District (SMUD) offers some of the lowest rates in the state, and its generation mix is 20 percent “eligible renewable,” including geothermal, solar, wind, biomass, and “eligible” hydroelectric. An additional 26 percent is large hydroelectric, and 54 percent is natural gas.

Because of the various incentive programs the site is eligible for, cost of power to the site itself would be even lower than in Sacramento overall, Cho said. “People don’t know about the power cost here in Sacramento, particularly in our facility, because we’re at a bit of a discount to the rest of Sacramento as well,” he said.

But the area’s biggest advantage of all is its proximity to the Bay Area. “There’s this concept of data gravity: Where data is created, it tends to get ‘sticky,’” said Jeff Barber, executive VP of sales and business development at Prime. “When you replicate your data [between Silicon Valley and Sacramento] very little latency is added” because of the short distance. “It’s not an unbearable latency,” he said. “It’s an excellent location for backups and primary storage.”

“You can come right in here and be in California, but paying essentially non-California costs,” Cho said.

To help develop the area and bring back some of the jobs that were lost, local authorities designated the site as an Opportunity Zone, as well as a Historically Underutilized Business Zone (HUBZone), because it’s located in a low-income part of Sacramento, Barber said.

“You need to invest more than half of your capital post-designation,” Cho said. “Since we’ve essentially completed the construction, that would be hard to do, so it doesn’t meet that requirement.”

Consequently, Prime is looking to set up joint ventures with partners that have capital gains to shelter by constructing data centers. If you invest your capital gains in an Opportunity Zone, you can defer paying taxes on those gains.

“Since we own the land and we’re not investing the capital gain, we need to bring in partners with capital gains,” Cho said. “We’re happy to do joint ventures with our tenants, where we’ll be equal partners. If you’re willing to take a share of the property, if you have a capital gain, you can roll that into a joint venture here and defer your taxes until 2026,” investing that money in the business. “It can take a third of your rental costs away at least.”

Organizations that don’t have capital gains to invest can still participate in the site, Cho said. “In the event that you don’t have a capital gain, we do have some structures,” he said. For example, organizations with an investment-grade credit rating can leverage it and find investors who will put in the capital gain and subsidize the data center, he said.

Investing in a data center while being its tenant means the tenant can benefit from depreciation of the assets without having to manage a data center facility, Barber said.

“People like the idea of joint venturing,” Cho said. “People have seen a lot of data center real estate businesses grow very large, and the tenants didn’t get much out of it. These sorts of savings are eye-popping.”

According to Cho, Prime hired him and Barber within the past few months to promote the Opportunity Zone benefits of the site. “I specialized in underfollowed opportunities, and it looked like an underfollowed place,” he said. “Sacramento is a wonderful place to do business in California and have a data center.”

Now that the company’s first data center building is finished, it’s ramping up the Opportunity Zone marketing. “We kept a low profile, because we hadn’t finished it,” Cho said. “This is a bit of a show-me industry, and being able to show someone a very nice facility really helps clarify that we know what we’re doing.”