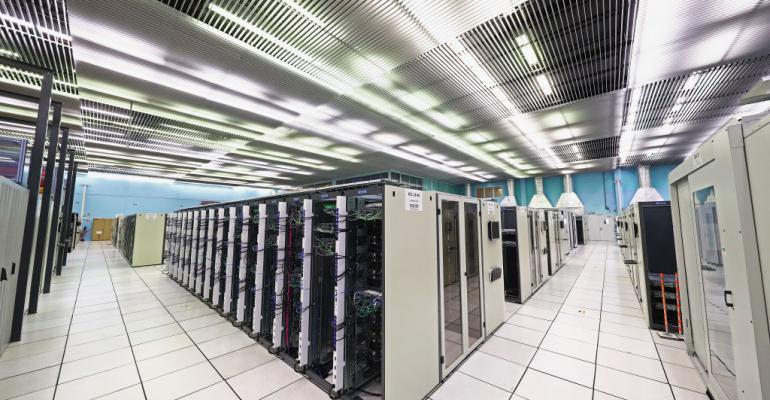 Digital was the first data center REIT to report. Along with releasing third-quarter results, Digital CEO Bill Stein announced the “definitive agreement to combine with Interxion, a leading provider of carrier- and cloud-neutral colocation data center services in EMEA."

Digital Realty's blockbuster deal with Interxion is valued at $8.4 billion, including debt. Here’s Digital’s own summary of what the global market ranking among the US-based REITs would look like post-merger: 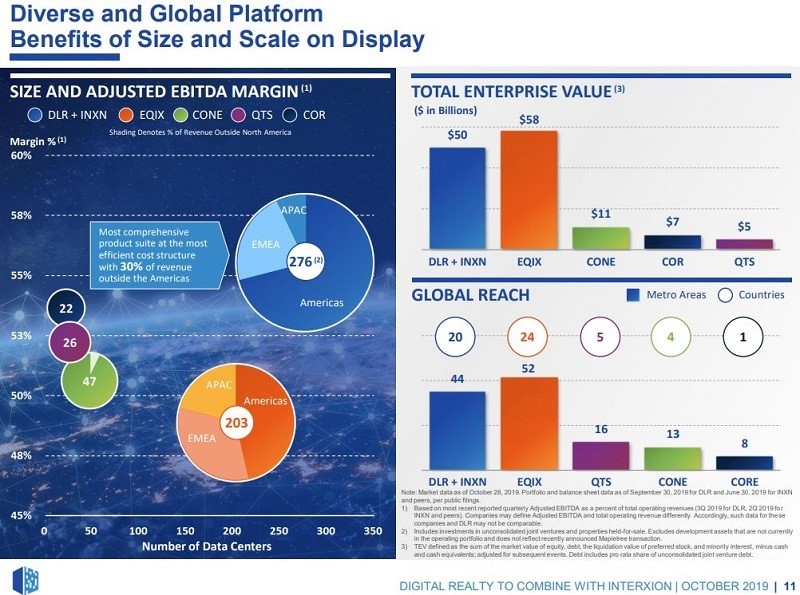 Clearly, the data center universe is shifting. The “gas giants” Digital Realty and Equinix continue to flex investment-grade balance sheets to fund massive acquisitions. The scale and reach of the two largest data center REITs continues to grow relentlessly – dwarfing the rest of the sector. 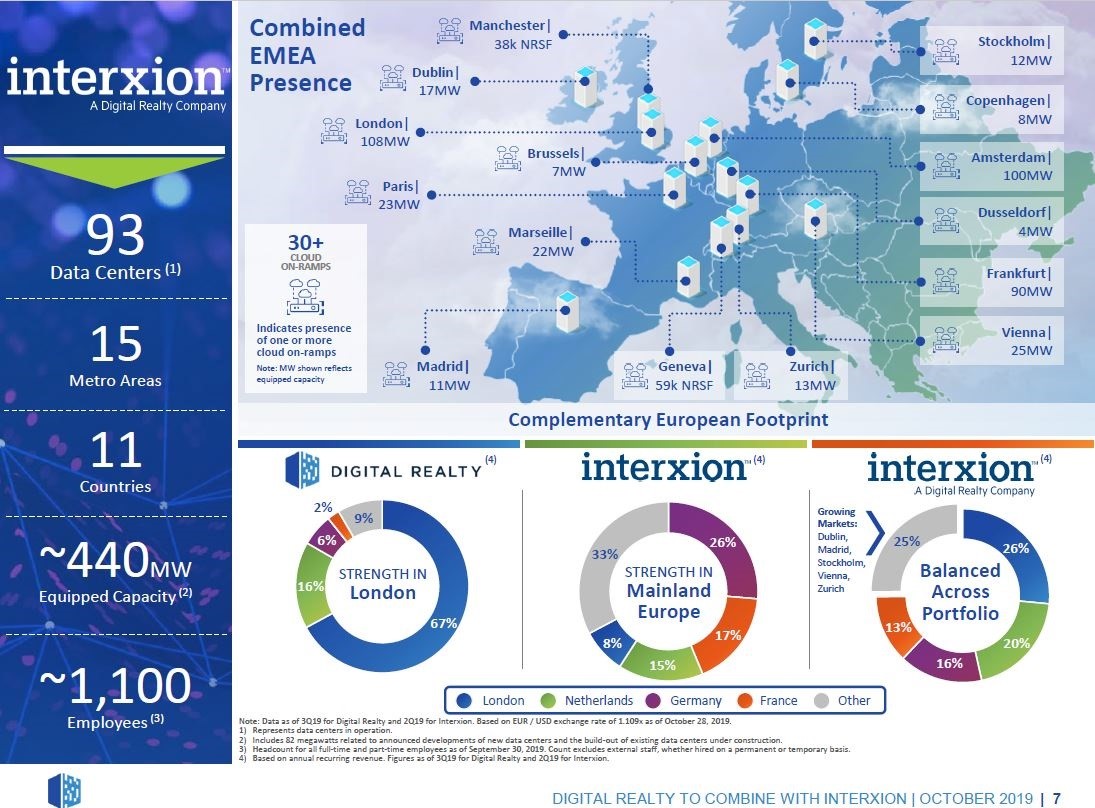 UK and EU regulators will likely approve the merger, since Interxion's market share in Germany, France, and the Netherlands is balanced by Digital's large presence in London. The combined portfolio will be nicely balanced across all the FLAP markets – with a solid presence across the rest of Europe. (FLAP stands for Frankfurt, London, Amsterdam, Paris.)

Global interconnection leader Equinix also has significant market share across the same markets. However, Equinix CEO Charles Meyers appeared to be unflappable when asked about competing in EMEA with a Digital-Interxion combination.

Asked by an analyst to comment on the two rivals’ deal on his earnings call the following day, Meyers said, there was “probably merit in the deal and an industrial logic to it. I think it's a bit of a stretch to say that the combination really meaningfully closes the gap in terms of trying to replicate the scope, scale, and value of Platform Equinix."

"We are not currently pursuing a sale of the company,” he said. “We remain focused on our strategy and creating long-term shareholder value. We do not intend to have any further comments on the recent media reports and market rumors but look forward to discussing our results for the quarter."

What didn't make the headlines were CyrusOne's strong quarterly results. Here's how Wojtaszek led off his prepared remarks on the call:

"This was, in my view, the best leasing quarter in the company's history, with $52 million in annualized revenues signed and the most diversification we have ever had across markets, verticals and product types, including a big contribution from Europe. Our backlog is nearly $55 million, de-risking our growth in 2020."

"And this quarter, we signed a record $23 million in annualized revenue to enterprise customers, which is 40 percent above our prior record. It's always been a little surprising to me that so many investors view us as a hyperscale data center company, seemingly forgetting that the majority of our revenue is generated from enterprise companies."

Additionally, Wojtaszek revealed that CyrusOne had purchased 20 acres of land in Council Bluffs, Iowa, to build a colocation data center adjacent to an existing hyperscale cloud campus. Wojtaszek said he believed this would become a new paradigm, driven by ballooning data sets: "They are becoming these digital black holes that continue to grow at an exponential rate."

He said that network nodes are becoming less relevant, "and we believe will be subsumed at the hyperscalers' compute and storage nodes, which will be where the next wave of internet value creation comes from."

This radical shot at competition – questioning long-term viability of the interconnection facilities that have been at the core of Equinix’s, Interxion’s, and others’ business models – got lost in the excitement around Digital-Interxion and Wojtaszek saying CyrusOne wouldn’t be selling any time soon.

The Digital Realty combo with Interxion looks like a marriage made in digital heaven.

But the deal sees Digital making an exception to its usual M&A mantra, which is that acquisitions must meet the criteria of being strategic, accretive, and balance sheet-neutral.

In the case of combining with Interxion to create a leading platform across EMEA, "strategic" trumped "accretive." In the near term, the merger will be a couple of pennies per share dilutive in 2020, neutral in 2021, and add one or two cents to AFFO per share in 2022, according to CFO Andy Power.

That guidance also appears to be conservative.

Notably, Digital's initial underwriting of the merger did not include any revenue synergies.

Interxion has over 2,000 customers within its highly interconnected data center footprint. In addition to many network, cloud, and IT services customers, Interxion has curated many "communities of interest" across multiple enterprise verticals, including healthcare, financial services, content, social media, and ecommerce. Interxion and Digital Realty both have extensive relationships with the hyperscale community.

After the merger is completed, the combined salesforces will begin to cross-sell products and services across the portfolio. Patient DLR shareholders should be rewarded as the united go-to-market strategy gains traction and fuels the AFFO per share engine supporting Digital's 15-year history of uninterrupted dividend growth.

In the next DCK Investor Edge, I will take a closer look at solid results from CoreSite, QTS Realty, as well as Equinix and Digital Realty.