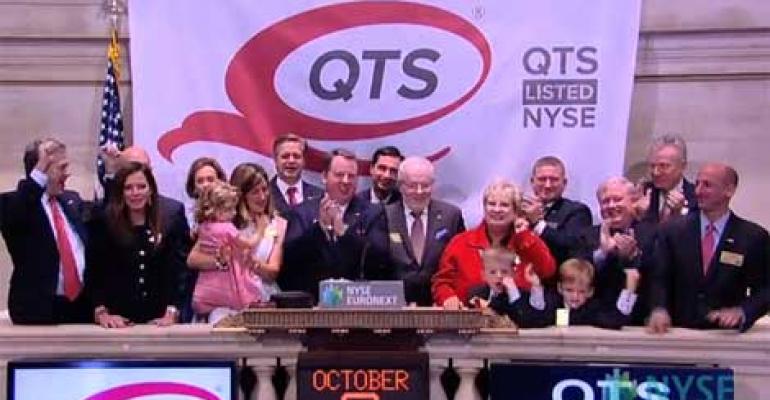 DCK Investor Edge: Here's How Data Center REITs Did in the First Half of 2017

The red-hot hyper-scale cloud leasing that drove absorption of data center providers’ inventory in Tier 1 markets last year has taken a breather. However, the backlog of cloud leasing from 2016 continues to fuel rampant construction, and the delivery of new powered shells in Northern Virginia and Dallas-Fort Worth bode well for leasing in this year’s first half in those two markets.

This past quarter was largely business-as-usual for most of the data center REIT sector. The pending merger of Digital Realty Trust with DuPont Fabros Technology continues to overshadow the sector’s overall solid results for the quarter ended June 30, 2017.

Several industry themes were highlighted by the Jones Lang LaSalle North America data center report published last week, mid-way through the REIT quarterly earnings report season. It confirmed hyper-scale cloud leasing is still a key factor in many markets, although it was muted compared with the same period last year.

But enterprise data center leasing came back with a vengeance in Dallas-Fort Worth, which saw a 50 percent increase in net absorption year-over-year. Looking ahead, the JLL report predicts that absorption of data center space in the second half of 2017 is expected to continue at the same cadence as the first six months of the year.

There are ample new powered shells being delivered in Northern Virginia during the second half, by DuPont Fabros, CyrusOne, and Digital Realty. If the current leasing trends in the continent’s biggest data center market hold steady, there will be over 80MW of wholesale data center capacity absorbed in fiscal 2017. While this is tracking under the record of 113MW absorbed in Virginia’s Data Center Alley in 2016, it would represent the second-highest amount of wholesale space leased in any US market. Notably, this is net of any Amazon Web Services powered shell space absorbed in Northern Virginia.

These latest insights into the “new normal” for 2017 bode well for investors. However, much of the good news was baked into the data center sector shares going into Q2 2017 earnings season. The lack of “blow-out” leasing numbers has led to a mild round of profit taking and a bit of healthy price consolidation, prior to the next leg up.

The valuation formula of the proposed merger with Digital Realty has boosted the DuPont Fabros share price above its peers since the June 9, 2017 M&A announcement. This all-stock merger was structured to be accretive to Digital shareholders when it closes later this year, due to the fixed ratio of 0.545 DLR shares for each DFT share.

After closing, Digital Realty’s investment-grade balance sheet will lower the cost of capital for the DuPont Fabros super-wholesale offerings, potentially making them even more attractive as part of the combined entity.

The Equinix/Verizon North American data center carve-out was also structured to be immediately accretive for Equinix shareholders. It has certainly contributed to the strong recent performance of EQIX shares. During the Equinix Q2 conference call Q&A, CEO Steve Smith shared that Equinix plans to actively compete for “the next wave of hyper-scale customer deployments.” This will be a new Equinix wholesale initiative that industry pros and investors should watch carefully.

CyrusOne CEO Gary Wojtaszek discussed expanding into Western Europe during his Q2 conference call. The immediate focus is on two land parcels near Dublin, Ireland, for developments to serve an existing cloud customer. CyrusOne is also seeking to acquire a local platform company to accelerate development in conjunction with this initiative. London, Amsterdam, and Frankfurt were also mentioned by Wojtaszek as future markets of interest.

In my view, given the double-digit revenue and FFO/AFFO per share growth put up by the sector in Q2 2017, data center REIT valuations do not appear to be out of line.

The colocation and interconnection business is far more consistent quarter after quarter than wholesale leasing. So, it is not surprising to discover the highest earnings multiples belong to the two publicly traded REITs primarily focused on retail business models.

Equinix reports adjusted funds from operations (AFFO), and EQIX shares are currently trading at 26.5x AFFO per share. In the abstract, this could be considered a high valuation. However, an impressive AFFO growth rate in the high-teens and an analyst consensus 15 percent dividend increase projected for 2018 are supporting this valuation. The global interconnection moat created by Equinix over the past two decades makes this impressive growth rate possible — despite being one of the five largest REITs with a market capitalization of $34.7 billion. Equinix has the lowest sector dividend payout ratio, now under 50 percent, which is reflected in the 1.8% current yield.

Digital Realty, CyrusOne, and QTS Realty are currently trading at lower FFO multiples of 19.4x, 20.2x, and 20.2x, respectively. The challenges surrounding earnings predictability — given limited visibility into the wholesale leasing pipelines — are largely responsible for the differential. Notably, the entire data center REIT sector is currently trading at multiples higher than historic averages, based upon the on-going double-digit growth potential.

Last year, data center REITs flew too high, too fast, and prices retreated significantly during late summer and into fall.

In 2016, data center REITs had powered up to 50 percent average gains during the first half of the year. The optimism over the pace of hyper-scale cloud service providers choosing to lease from third-party wholesale data center companies fueled the irrational exuberance. Data center REIT valuations became frothy and detached from fundamental valuations and dividend yields. The sector had become a basket of six “momentum” stocks peaking in July 2016. The YChart above shows the exceptional relative performance last year of data center REITs. However, since all commercial real estate classes were performing well (the MSCI REIT Index was up 14.7 percent), it was less conspicuous.

However, the data center sector’s relative outperformance is even more pronounced in 2017, due to the lackluster performance in asset classes like lodging, self-storage, healthcare, net-lease, shopping centers, and malls, dragging down the broader REIT results. The Vanguard REIT Index ETF (VNQ) tracks the performance of the MSCI REIT Index (RMZ) which is barely in positive territory for the year.

This stark contrast makes the average 23 percent price appreciation of the data center sector year-to-date even more noticeable this year. The publicly traded data centers are providing the Holy Grail for REIT investors: current yield, dividend growth, and price appreciation. Given the tremendous secular tailwinds for the data center sector, it appears that REIT investors are now looking to buy the dips, in contrast to last year’s frenzy and fizzle.

Data center REIT outperformance in 2017 has been driven by solid results and healthy supply/demand fundamentals reported in most major markets.

The share multiples for the data center REITs do not appear to be out of line given the backlog of signed contracts, pre-leasing of new developments, and sales funnels which reportedly are at least as large as last year. (The one exception would be Silicon Valley, where there is a dearth of new supply after record absorption last year.)

It remains to be seen what the next catalyst will be for the data center REIT shares. However, in addition to the usual suspects of cloud computing and accelerating hybrid IT deployments, the industry tailwinds now include increased focus on potential M&A transactions.