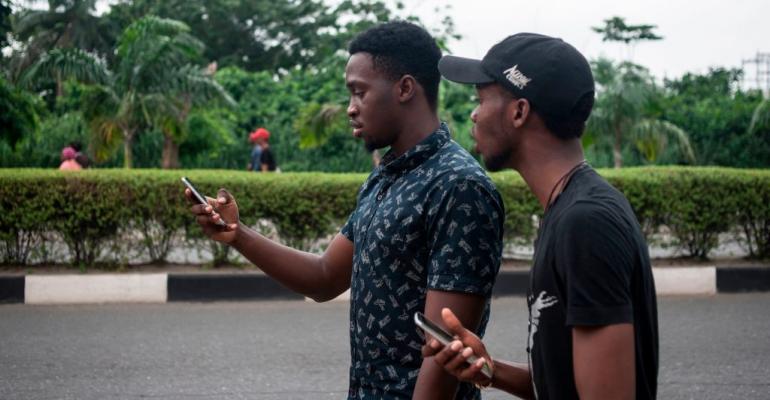 STEFAN HEUNIS/AFP via Getty Images
Two young men play the mobile AR game Pokemon Go on the campus grounds of the University of Lagos in Lagos, Nigeria, in 2016.
Business>Investing

Capital is pouring into digital infrastructure in the continent’s politically stable countries with deregulated telecom markets.

Capital is pouring into digital infrastructure in Africa in anticipation of a population boom on the continent, according to private investors who have put money up for yet another pan-African data center network.

London-based investment house Actis announced this month that it had acquired Nigeria-based Rack Centre, saying Rack Centre’s would become part of a continent-wide network of data centers. Actis has raised $250 million from private investors so far to build that vision.

An incredible phenomenon prompted Actis to raise the money, a spokesman for the fund told DCK. The fund was formed in 2004 from a former philanthropic agency of the old British Empire and has since raised $15 billion for energy infrastructure in Africa and other less developed regions.

The phenomenon is a vast population increase. This has been followed by a great increase in mobile phone usage across Africa, creating a sudden demand for internet services. But internet services are scarce, because hardly any data centers have been built to supply them due to a lack of capital investment.

The capital and demand imbalance comprises the Actis investment thesis. Hence, said the spokesman, its recent investment in data centers.

The scale of need for data centers to meet population growth "is astoundingly significant," Guy Zibi, principal analyst at Xalam Analytics who is tracking the African data center boom, told us. Few of the 80 cities with over one million people in Africa have independent, or carrier-neutral, data centers.

But the continent’s population was already vast 20 years ago, when the first internet infrastructure was built in Africa. Actis said it raised money now in anticipation of growing demand for services. But why wasn’t there such anticipation when internet infrastructure was just starting to be built in Africa in the late 1990s? Why not last decade, when both the market and the technology were there? Why is Africa's most populous country not its most connected?

The reason, said the spokesman, was related to electricity infrastructure. Actis would say no more on the topic. But official statistics and the accounts of executives running leading data center firms on the continent concurred.

In South Africa, the continent's most connected country, 60 percent of people had electricity when the first internet exchange was established there in 1996, according to World Bank indicators. And there was enough power so that when mobile phones came to South Africa, it had 80 mobile subscriptions for every 100 people by the mid-2000s.

But electricity alone isn’t enough for people to use the internet. Use lagged until South Africa liberalized its telecommunications market in 2008. Then it boomed, so that by 2017, the last year for which the International Telecommunications Union has audited numbers, 60 percent of the population was online.

In Nigeria, not even a third of people had electricity in 1996, and still only half in the mid-2000s. Mobile phones were rare as well, until the collapse of the country's military dictatorship at the end of the nineties, when they boomed. Yet by 2014, when Nigeria had 80 mobile subscriptions per 100 people, still, only half its people had electricity.

People started to use the internet after Nigeria liberalized its telecommunications sector in 2006, but in low numbers until its energy sector was liberalized as well, in 2014. Little more than half the population had electricity in 2017. Last year, the government gave the internet a push and pledged to make broadband available to 70 percent of its people by 2021. A third had broadband access by then. Both Actis and Xalam’s Zibi have characterized this as Africa’s inflection point.

The Power of Political Stability and Telco Deregulation

Dr. Ayotunde Coker, managing director of Rack Centre, said it took twenty years of sustained democracy in Nigeria for its economic transformation to happen and for the corruption that flourished under the military regime to be tamed. In the ten years since the telecoms liberalization, five subsea cables have landed at Lagos – all connected to the Rack Centre data center that’s part of Actis’s pan-African strategy.

Telecoms carriers, cloud providers, content delivery networks, internet service providers, and internet exchanges have flocked to the cable hub, where they can reach every country on the west coast of Africa and make equidistant hops to Europe and South Africa.

"Fifteen to twenty years ago it was felt that mobile comms wouldn't happen in Africa. There just wasn't the wealth,” Coker said. “Then companies like MTN proved the innovation of pay-as-you-go. It's fantastically successful. Cloud services will be as successful, because they bring computer services to customers like SMEs. And broadband is rising. That's the inflection.”

Nigeria's economy, once based primarily on oil, is now said to be driven by technology, "the new oil." In September, the government said, ICT generated nearly 15 percent of Nigeria's income, more than oil and gas by half. The belief that broadband connections bring economic growth has driven states to remove barriers to inter-network communications which have stunted internet growth in Africa. Right-of-way fees for passing comms traffic was one example, said Coker.

Andrew Owens, peering and interconnection specialist at Teraco, a South African data center operator, said its business could not have thrived if the government had not liberalized telecoms there in 2008. On March 3, Teraco announced that NAPAfrica, an internet exchange it hosts, carried 1 terabit per second of peak traffic. Nobody before thought that would be possible in Africa, Owens said. Reaching the milestone put NAPAfrica close to the top 20 internet hubs in the world, according to public records.

"We thought we might have reached it earlier, but the power situation in South Africa stunted it," said Owens. South Africa's energy grid is so strained that the authorities have different sectors of the economy on a rotating blackout they call power shedding.

Still, the internet in South Africa has been established more substantially than anywhere else in Africa because the country had 20 to 30 years of political stability, he said. It encouraged investors. Now even banks and other large companies in South Africa are looking to put their computer systems in independent data centers.

"North Africa is not as politically stable,” Owens said. “People are very wary of investing there. West Africa was the same, but there's been a big change recently. We've seen a lot of interest from international bodies investing into West Africa as things sort of stabilized," he said.

Egypt is connected by more subsea cables than almost any other place on the planet, but it’s South Africa that carries the most intercontinental internet traffic on the continent. Since Egypt’s 2011 revolution, the number of internet exchange points has doubled in Africa as a whole, but most of that growth has occurred in East Africa.

Almost everyone in Egypt has electricity, despite a negligible amount of liberalization of its state-run energy sector. But that’s because heavy subsidies compensate for it being among the most expensive and inefficient energy systems in the world. Electricity has been near-universal there for thirty years, and mobile usage common for a decade. Yet, less than half of Egyptians use the internet.

Similar patterns are evident in data for other prominent African countries. Cautious, partial, incremental, but persistent reform in Kenya turned an energy grid that served not even 5 percent of people in the mid-90s into one that served 60 percent in 2017. Internet use grew gradually as people got power.

Ethiopia, which began privatizing its telecoms monopoly only last year, has a state-run energy regime that delivered electricity to less than half its people, even in 2017. Few Ethiopians were using the internet in 2017, the last year the International Telecommunications Union collected numbers. Their data, however, shows that countries with more wealth have more extensive energy infrastructure.

The inflection is not seen yet in official figures, which are slow to catch up. But it is seen in such deals as the Berkshire Partners’ acquisition of a majority stake in Teraco last year. Berkshire is a $16 billion US private equity fund. The inflection is seen, said Zibi, in the new level of comfort investors have with the idea of investing in data centers in Africa.

"Some of the initial business cases, like Teraco, and EADC in Nairobi, have proven quite strong. Demand is perking up, so investors are financing more initiatives and expansions," he said. "It's not happening everywhere because the underlying power and fiber infrastructure in Africa is highly uneven, as are regulatory conditions. The reality is that some countries offer optimal conditions for data centers to thrive, but most do not.”