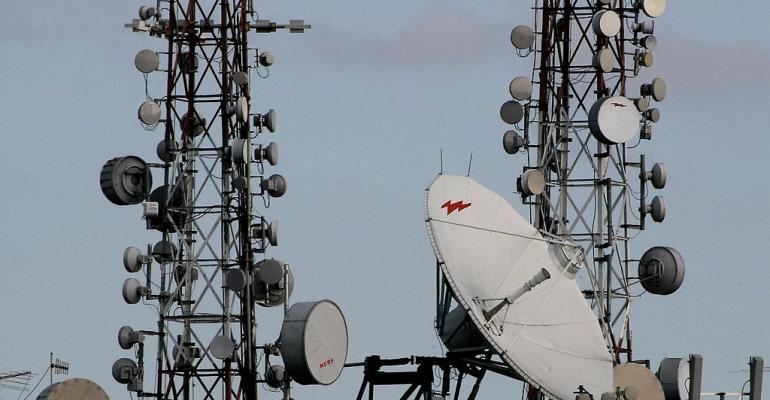 DCK Investor Edge: The exec lays out the role Colony 2.0 will play in 5G and edge computing.

Ganzi, who next year is expected to become publicly traded Colony’s CEO, shared his vision for infrastructure that will support 5G wireless, all the next-generation applications it promises to bring about, and the role Colony should play there at a recent investor conference.

Related: Why Digital Bridge Isn’t Building Edge Data Centers at Its Towers (Yet)

In his view, service providers will share a lot more infrastructure in that future world than they do today. Colony, with its enormous portfolio of fiber, tower, small cell, and data center assets, is in a good position to provide complete solutions to support that shared infrastructure.

This is what a pivot to digital looks like for a traditional REIT. The digital world doesn’t exist outside the physical realm, and with the right mix of physical assets, a traditional real estate investor can become an enabler of digital. Colony’s board voted last year to turn away from traditional real estate (industrial, lodging, healthcare) where it has struggled, and transform into a REIT focused on converged communications and digital infrastructure.

Out with ‘Old Thinking’

Speaking at the Citi Global TMT West conference earlier this month, Ganzi advocated for a new wireless network architecture, where, essentially, more equipment is shared by service providers. In the traditional architecture, a carrier installs a radio unit and a baseband unit at a cell site, and the two units work together to move that carrier’s data traffic.

In the new architecture, multiple service providers can have their own radio units to communicate with their users’ wireless devices, all connected to a single, shared baseband controller, which can be located miles away from the tower. The link between the radio units (in this architecture called “remote radio heads”) and the centralized controller is called “fronthaul,” as opposed to “backhaul,” which links a wireless site to a backbone network in the traditional architecture.

The traditional architecture is “old thinking,” Ganzi said. “And this old notion of backhauling the network is old thinking. The new style of thinking is fronthauling that network, having software-defined networks where you can deploy multiple spectrum bands across multiple antenna departure places.”

This new architecture, however, will require a lot more capacity on the fiber links going out to the cell sites than there currently is. “All this works with a massive amount of dense fiber,” he said. “We're talking about 12, 16, 24 pairs of fiber going out to the macro site and the small cell.”

5G applications will also require computing closer to the sources of wireless traffic, plus network links to core cloud data centers located remotely. Ganzi sees Colony playing at all levels of this infrastructure, providing tower real estate, data center space, and access to fiber. And even though he’ll only take its helm next year, he’s already played a leading role in a number of sizable investments by the REIT to execute on its new strategy. 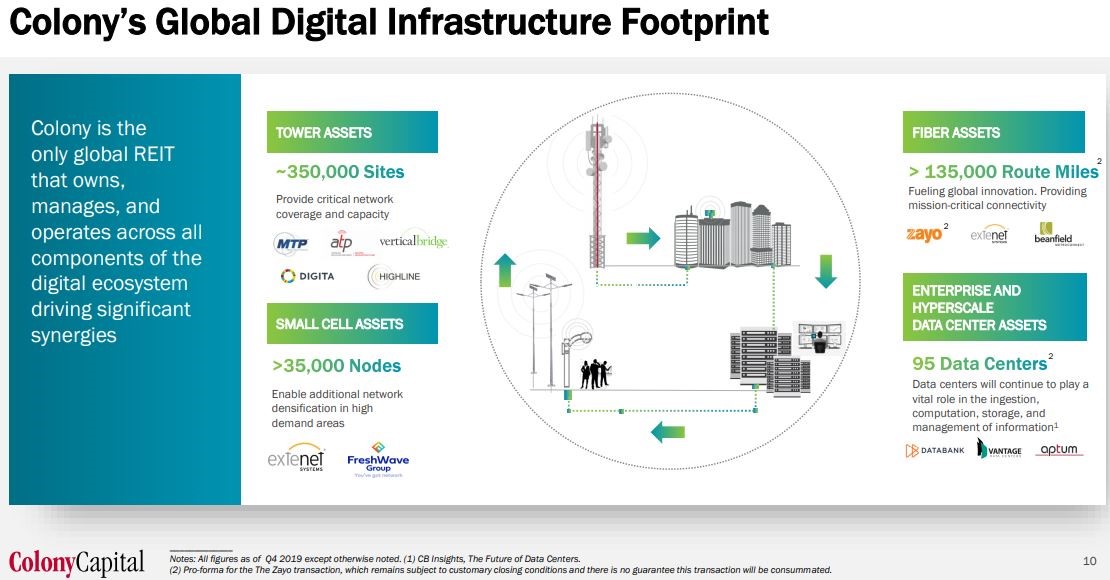 At this point, there’s no guarantee that all the backend infrastructure for 5G and the associated edge computing will be built the way Ganzi sees it. In fact, there may ultimately be multiple solutions designed to solve different variables in different markets, including availability of spectrum, access to fiber routes and/or fiber density, existing 4G/LTE network configurations, approvals and permitting for small cells, and so on.

Crown Castle, the US wireless tower giant, has also been maneuvering to get itself in the best position to take advantage of the 5G and edge computing opportunity.

In his presentation at the Citi conference, Crown CFO Dan Schlanger said it was too early in the game to decide how best to deploy compute at tower sites, due, according to him, to a lack of viable 5G use cases.

He discussed two potential plays Crown: 1) simply lease land with access to power and fiber at macro tower sites to third parties; and 2) deploy micro edge data centers and lease the rack space to customers (Crown is an investor in Vapor IO, a startup that builds micro data centers to do exactly that).

In any event, Schlanger said, the company plans to stick with a traditional, passive, shared infrastructure business model, with no plans to own or operate active electronics.

Ganzi emphasized that his relationship with Tom Barrack, Colony's founder, chairman, and current CEO, went back many years.

During 2017, he said, their ongoing discussions led to the genesis of Digital Colony, a dedicated infrastructure fund, co-sponsored by Colony and Ganzi’s Digital Bridge. During a nine-month road show in 2018, Digital Colony raised a record $4.1 billion from investors for its fund, exceeding the original $3 billion target. 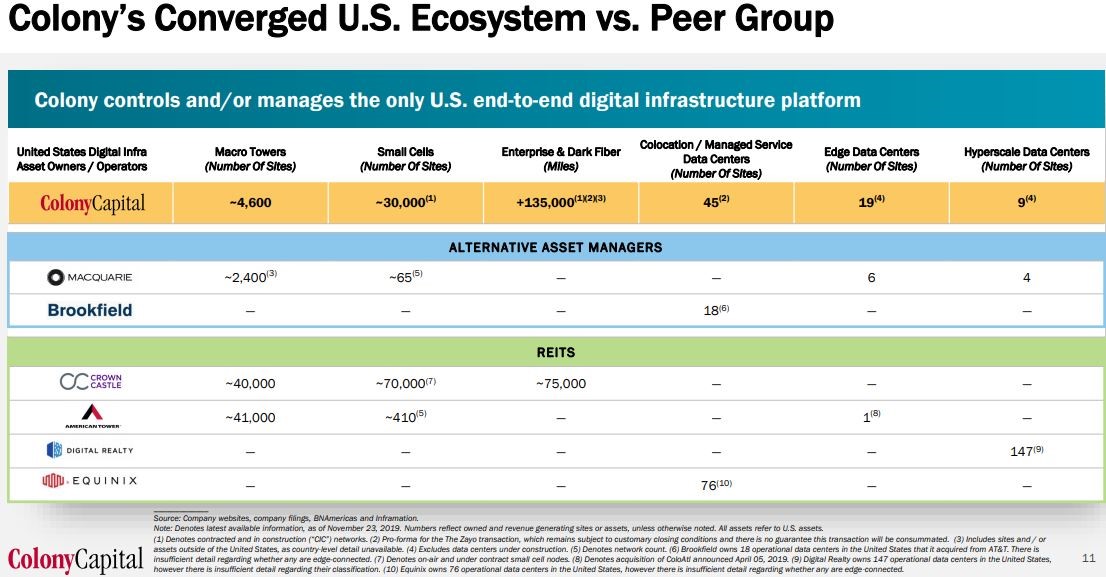 The plan for Ganzi to succeed Barrack was announced around the same time. Colony’s board voted in favor of the pivot to digital a few weeks later.

Ganzi began his digital infrastructure journey in the world of wireless towers, founding Global Tower Partners in 2002. Together with partner Ben Jenkins (formerly of The Blackstone Group), he grew GTP into the largest private tower company, with 16,000 sites, prior to selling it to American Tower for $3.3 billion in 2013.

The company appointed Michael Foust, co-founder and former CEO of Digital Realty Trust, one of the world’s two largest data center developers and operators, to chair the boards of both DataBank and Vantage.

While Colony and Digital Bridge operate as stand-alone businesses, they can collaborate to deliver integrated solutions for customers, Ganzi said.

If Colony can successfully execute the pivot over the next few quarters, transforming from a struggling traditional REIT to a digital infrastructure provider, it could present investors with a unique opportunity. Its opportunity to provide edge-to-core infrastructure solutions and cross-sell across its various businesses appears to be a differentiator.

But there is still a lot of wood left to chop. At this point, CLNY shares remain a speculative investment. "It is important that we continue to maintain the Colony dividend," Ganzi declared in his speech at the Citi conference. Its quarterly distribution currently yields 9.1 percent, so existing shareholders are getting a high yield amid the transition to "Colony 2.0."