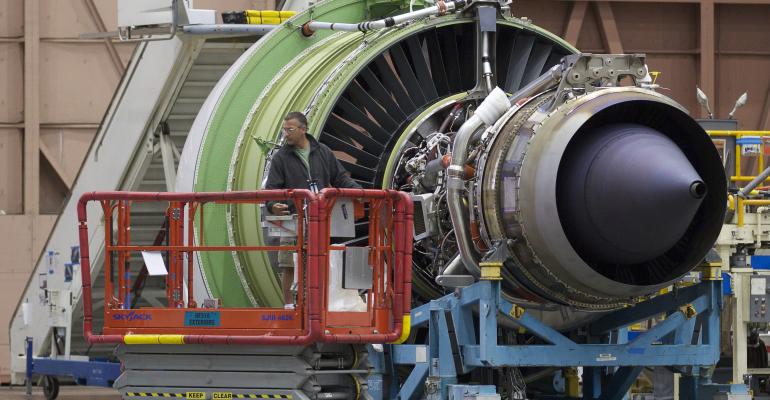 Stephen Brashear/Getty Images
GE engine for a Boeing 777 airliner at the Boeing Factory in Everett, Washington
Internet of Things

GE Digital, the troubled industrial giant’s software unit with an uncertain future, is continuing to forge ahead, expanding the ways customers can use Predix, its crown-jewel cloud platform for crunching operational data from big machines, enabling the company’s vision of an industrial Internet of Things, or IIoT.

The GE business unit on Thursday introduced a private cloud version of Predix, which customers can deploy in their own data centers, and unveiled a big revamp of Predix software for edge devices. GE Digital spokespeople shrugged off questions about uncertainty of the unit’s future in an interview with Data Center Knowledge, saying it was continuing to see revenue growth and interest from both existing GE customers and companies that aren’t using the conglomerate’s equipment.

“Our roadmap remains completely intact, and our investments continue to grow,” Joe Nichols, GE Digital’s chief operating officer and its VP of product strategy, said. Investment is growing in development of both the Predix cloud platform and specific applications that run on top, he said, adding that customer adoption is going well, in spite of broader concerns about the GE entity.

GE’s revenue has been shrinking, primarily as a result of a slowdown in its Power business, which sells power generation equipment to energy producers. The company this week reported yet another disappointing quarter, announced a $22 billion Power-related write-down, and disclosed an ongoing criminal probe into its accounting by the Department of Justice.

Lately, it’s been shedding various business units in attempts to right the ship, and in July, The Wall Street Journal (subscription) reported that GE Digital was one of the units whose assets were on the block. It’s unclear which parts of the unit the company has been wanting to sell.

Introducing the private-cloud version of Predix is an attempt to target customers who aren’t comfortable running software that manages their industrial equipment in the public cloud. Until now, Predix has been hosted on Amazon Web Services and Microsoft Azure public clouds only.

A mix of open source and GE’s own software, Predix Private Cloud is “nearly the entire Predix cloud stack” customers can deploy on their own premises, Nichols said. Some of the open source software used includes pieces of the cloud infrastructure suite OpenStack, PostgreSQL database, and cloud Platform-as-a-Service software Cloud Foundry.

GE Digital designed the software stack to be “hardware-agnostic” to give customers freedom to choose what kind of hardware to run it on, Nichols explained.

The first release, called Enterprise Predix Private Cloud, is for companies that use industrial equipment but are constrained in their use of public cloud because of security requirements and location requirements for data storage. “We have some very large customers that have data sovereignty concerns, data security concerns,” he said.

Like the public cloud version of the platform, it supports GE applications and tools for operational data gathering and analytics and provides an environment for customers to develop and run their own applications.

While this release is strictly for private cloud deployments of Predix, GE Digital is planning to introduce hybrid capabilities, enabling customers to connect their private clouds with the public cloud platform. It’s working on enabling those scenarios with Azure.

“You’ll see much closer alignment with our private cloud and elements of Azure, as we integrate those going forward,” Nichols said. That work includes looking at Azure Stack, Microsoft’s on-premises version of the Azure infrastructure software stack.

The big use case GE Digital tried to address with the 2.0 release of its software stack for edge devices, called Predix Edge, was managing analytics at the edge, including the ability to push some analytics workloads back to the cloud, he explained.

The new release includes a full operating system for edge devices and management tools for data capture, analytics, transmission of data to the cloud, as well as device management features, such as system upgrades and reporting.

While its big early champion, former CEO Jeff Immelt, treated it as a core strategic priority, GE Digital is a relatively small part of the behemoth that is GE in terms of revenue. It made $4 billion in sales in 2017, including $500 million from Predix products. The conglomerate’s total revenue for the year was $122.1 billion.

“We have a platform and an application product strategy,” Nichols said. “We have seen triple-digit year-over-year growth on the application stack.” The unit has seen more usage of the platform and applications by existing customers, “and we have net new customers coming on board that haven’t used our platform or applications.”

GE executives made no mention of GE Digital, software, or IoT on the third-quarter earnings call Tuesday.

Paraphrasing a statement by a GE Digital spokesperson, a previous version of this article said the business unit was looking for an "investor." The spokesperson said "investment partner," and the article has been updated accordingly.
TAGS: Business Edge Computing Voice Update
0 comments
Hide comments
Recommended Reading