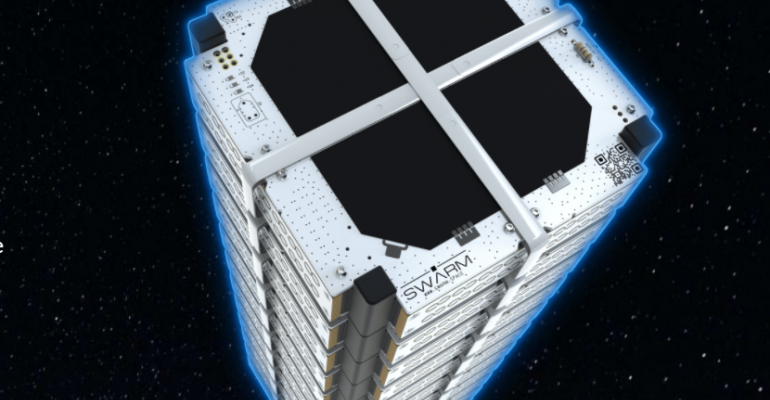 It's "like dial-up modem speeds," but that's all that's required for the Internet of Things.

Ashlee Vance (Bloomberg) -- Elon Musk is in the process of putting up tens of thousands of large-ish satellites meant to deliver high-speed internet access to every person on Earth. Swarm Technologies Inc. wants to do something similar, only different. The four-year-old startup has put up a constellation of tiny satellites that deliver internet access in drips and drabs to all types of devices.

To date, Swarm has placed 21 of its paperback-sized satellites into orbit. Nine of these devices were experimental units to prove that the technology worked, while 12 of them were production models launched this month from a spaceport in French Guiana. With the fleet now up and running, Swarm has revealed the prices for its data service for the first time. Customers will pay $5 per month to send 150 kilobytes of data—equal to about 750 text messages—and a onetime $119 fee for the satellite modem that links devices to the satellites. “We joke that it’s like the internet of 1996, like dial-up modem speeds,” says Ben Longmier, the co-founder and chief technology officer of Swarm. “For most of our customers that is totally fine. They want to send the equivalent of a couple of text messages several times a day.”

Unlike Musk’s lofty goals with his Starlink satellite service—to supply high-speed internet to the more than 3 billion people that cannot be reached by fiber optic cables today, and a fast network to things like planes, cars and boats—Swarm wants to create a dirt-cheap digital heartbeat surrounding the globe. Its service is not meant for streaming movies but rather to allow things like moisture sensors on a farm to report their readings or a shipping container to record its temperature. Such a service could be a backbone to making the so-called Internet of Things work well.

To pull this off in a cost-effective fashion, Swarm has built satellites that weigh just 14 ounces each. The startup plans to put up 150 of them by the middle of 2021. It has purchased rides on rockets from Space Exploration Technologies Corp. and Rocket Lab USA Inc., among others, to plop the devices in orbit in a type of interlinked web that surrounds Earth. So far, Swarm has raised $35 million from investors, including Craft Ventures and Social Capital.

Evan Thomas, the CEO of SweetSense—a start-up that builds devices to monitor water and energy in remote places—has been testing the Swarm network on a series of sensors placed inside water pumps throughout East Africa and California. The pumps are in remote areas that lack consistent access even to cellular networks, and the job of the sensors is to report back on how much water the pumps are supplying and whether or not they’re working correctly. In Africa, the pumps provide the daily water supply to more than three million people in countries including Rwanda, Kenya, Uganda and Ethiopia, making their smooth operations essential. SweetSense currently uses the Iridium satellite network for its data services. “Iridium is meant for cruising the internet and making phone calls, and we don’t need that much bandwidth,” Thomas says. “We are spending about $100,000 per year for data and expect Swarm will be about a tenth of that.”

Out in New Zealand, a company called Hivemind uses Swarm to check on the weight of beehives placed in remote locations to know when they’re ready to harvest instead of sending out a human in a helicopter to do the work. Meanwhile, Sofar Ocean Technologies will use Swarm to gather data from thousands of floating weather sensors in the Pacific Ocean. “Specific to the ocean, this is a game changer,” says Tim Janssen, the co-founder and CEO of SoFar. “Distributed sensing has massively accelerated sensing on land and in space, but not yet in the ocean.” The goal for SoFar is to gather more detailed information about the health of the oceans, while also building out super accurate weather forecasts that can be used by shipping companies and others to travel more efficient routes.

Swarm has spent the past several months setting up ground stations all over the globe, including in Antarctica, which help relay signals and information from its satellites. The company has also been refining the design of its satellites, which it makes at its headquarters in Mountain View, California, to improve their ability to send and receive data. Swarm already has the all-clear to operate its service in the U.S., Canada, New Zealand and throughout Europe, and is in the process of expanding to other countries. “There are some places that are like, ‘Sure, do whatever you want,’” says Sara Spangelo, the co-founder and CEO of Swarm. “Other countries are quite involved. We are aiming to bring connections to everyone.”