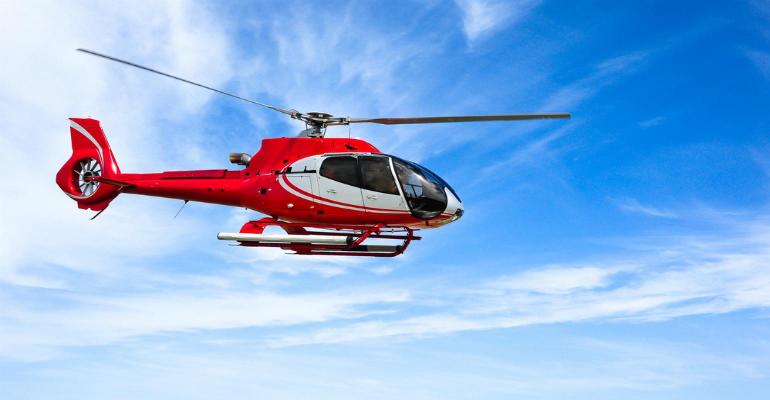 In the days before the Internet of Things (IoT), most small-aircraft operators used a satellite connection to get an aircraft's location — a dot appearing on a geographical map. The dot would show up every 10 minutes, because a higher reporting frequency was too costly.

Imagine a helicopter traveling 60 knots, or a nautical mile a minute, going down near the 10-minute mark. Pi r-squared is no one’s friend. The search area would be roughly 300 square miles.

“I spent 14 years in U.S. Army special operations as a Chinook and Black Hawk guy and was fortunate not to have been hurt, yet I’ve buried a lot of friends,” says Mike Slattery, general manager and chief pilot at Aviation Services Unlimited, a Rome, New York-based service provider using helicopters to inspect and maintain pipelines and powerlines. “I can’t live with myself telling a family, ‘They went down at dusk, and I don’t know where they are.’”

IoT has been lauded for disrupting business models and saving companies a lot of money, but can it help ease the suffering in a tragedy? Can it reduce the search area of a downed aircraft?

In order to shorten the search radius, location reporting needs to happen much more frequently. But it costs a few pennies every time the dot appears via satellite, making high reporting rates cost-prohibitive. IoT, on the other hand, can tap into cheap cellular networks to get the location of the aircraft

Slattery wanted this for his pilots. Through an old flying buddy, he learned about a company headquartered in New Zealand, called TracPlus, that had pieced together a solution using its proprietary SaaS tracking software, Rock 7 Mobile tracking hardware, and, critically, Aeris' IoT services platform.

The TracPlus system takes a hybrid approach: In areas of cellular coverage, location reporting happens every 15 seconds. Outside of cellular coverage, the system relies on satellite and location reporting that is every one to two minutes. The satellite cost is offset by the cellular cost. After paying $2,000 for the tracking device, Aviation Services Unlimited receives a monthly service bill of $70 per month for every tracked aircraft.

“Powerline and pipeline patrol is pretty low-level and hazardous – someone getting distracted and hitting an antenna – and usually an accident in that environment is fatal,” Slattery says. “Now I get 15-second hits and see their ground speed and altitude. I track them on my iPhone on weekends.”

Before this could happen, TracPlus needed to overcome a giant hurdle in IoT: working with multiple cellular networks.

For instance, the tracking system in an aircraft leaving Anchorage, Alaska, might need to use AT&T, switch to satellite while in wild areas, and use a different provider when arriving in Nome. TracPlus found a vendor that offered this unique capability — Aeris. TracPlus now resells the Aeris IoT services platform.

The tracking system also must be dependable — high availability and reliability are paramount. TracPlus' Chris Hinch, founder and chief innovation officer, claims TracPlus runs close to five-nines, which means downtime of less than 5.26 minutes per year.

Chris Hinch
In fact, Hinch started the company because he saw how technology like IoT can track assets and avoid costly mistakes. In 2003, Hinch watched the news of a fishing vessel capsizing off New Zealand’s North Otago coastline. Three out of five men died from hypothermia, as they waited for a rescue aircraft more than two hours away. Sadly, there was a helicopter only 20 minutes away, but due to a record-keeping error, this helicopter wasn’t sent.

“What was frustrating wasn’t the tracking systems, but that there should have been an easy way for the rescue coordination center to see where their assets were,” Hinch says, adding, “This is about saving lives.”