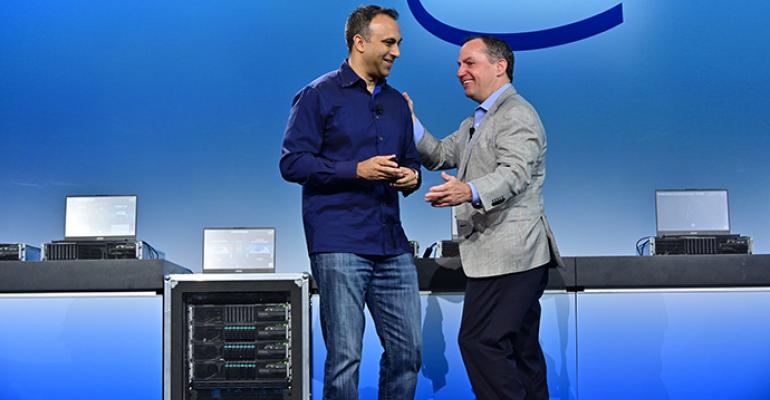 Revenue in the current period will be about $15.6 billion and net income will be 83 cents a share, the Santa Clara, California-based company said Thursday in a statement. That compares with average analysts’ estimates of $16.9 billion and 96 cents a share, according to data compiled by Bloomberg. Sales for the year will be $69 billion, Intel said, far below analyst projections of $71.3 billion.

Chief Executive Officer Bob Swan, who stepped up from the chief financial officer role in January, is struggling to prolong a run of record earnings and fend off burgeoning semiconductor-industry competition that threatens Intel’s dominance. The key to the company’s financial health has been demand from cloud-computing providers for chips used in servers, Intel’s priciest and most profitable products. In the first quarter, that business declined 6.3 percent, snapping a run of gains that had fueled the company’s overall growth even as the personal-computer market languished.

Swan said Intel is dealing with the hangover of "explosive growth" in 2018 and customers are working through their stockpiles of unused parts.

"Last year we had outstanding growth and we were expecting a slowing in data center," he said in an interview after the report. "It’s going to take a little longer than we anticipated. But we’re not moderating our medium and long-term view about the demand for data processing."

Intel shares slumped about 6.6 percent in extended trading following the announcement. They had earlier slipped 1.9 percent to $57.61 at the close in New York, leaving them up 23 percent this year. That performance trails the benchmark Philadelphia Stock Exchange Semiconductor Index’s 35 percent advance.

Sales in the first quarter were little changed at $16.1 billion. Analysts on average had predicted $16.03 billion in revenue. Net income slipped to $3.97 billion, or 87 cents a share, while analysts had projected 82 cents. In last year’s first quarter, Intel posted earnings of $4.45 billion, or 93 cents.

The data-center unit’s decline contrasted with growth of 9 percent in the fourth quarter. In January, Intel executives predicted that orders would pick up once customers worked through stockpiles of unused chips. Intel’s Xeon processors account for more than 95 percent of the market for chips that run servers, the machines that provide the backbone of the internet and corporate networks.

The company announced earlier this month that it will wind down a multibillion-dollar, decades-long effort to stake a claim in chips for the mobile-phone industry. After Intel’s one significant customer, Apple Inc., said it will return to using Qualcomm Inc. for its iPhones, Intel announced plans to stop developing chips for 5G smartphones and to complete an assessment of the opportunities for modems in personal computers and other devices.

Though the server market is more profitable, Intel still gets the majority of its revenue from the PC market, and its processors are the main component in most of the world’s laptops and desktops. That business posted first-quarter sales of $8.59 billion, up 4.5 percent from a year earlier. Shortages of some parts, caused by manufacturing issues at Intel’s plants, have limited shipments of PCs in recent quarters. Swan said those shortages will continue through the first half of the year.

"Why are we still seeing CPU shortages from Intel? Companies are still having a hard time getting CPUs," said Weston Twigg, an analyst at Keybanc Capital Markets Inc., referring to the central processing unit of PCs. "Why are they leaving the window open for competitors to gain share?"

The company has been struggling to shift its factory network to more advanced techniques. That’s left Intel and the computer industry short of manufacturing capacity. In response, the company prioritized making chips that it can charge more for -- server and high-end desktop processors -- causing a scarcity of supply, particularly for cheaper laptops.

Intel initially sparked concern last year that it may be losing its edge in manufacturing when the company confirmed that it wouldn’t mass-produce semiconductors made with 10-nanometer technology until later this year. That may put it behind chipmaking rivals such as Taiwan Semiconductor Manufacturing Co.