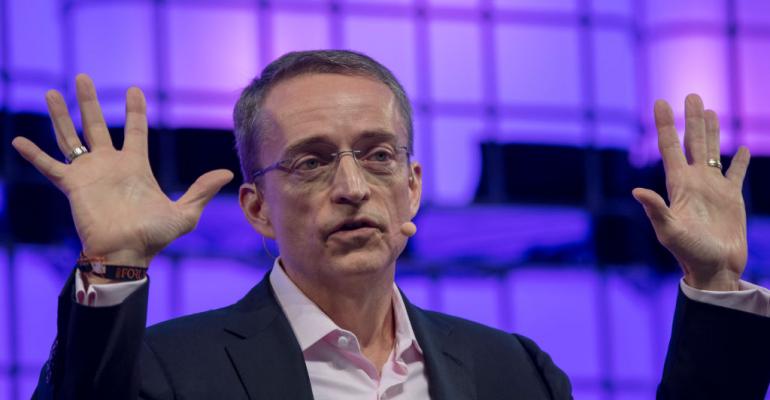 Horacio Villalobos - Corbis/Getty Images
Pat Gelsinger, then CEO of VMware, speaking at a conference in 2017
Companies>Intel

Its data center chip sales to hyperscalers like AWS and Google dropped 20 percent in the second quarter.

Ian King (Bloomberg) -- Intel Corp. Chief Executive Officer Pat Gelsinger said the worst of a sales slump has passed and struck a bullish tone about the chipmaker’s prospects for the rest of the year and beyond. Investors are waiting to see proof that the company can regain dominance in the semiconductor industry.

The key to winning them over will be Gelsinger’s ability to lure back some of the largest companies in technology -- cloud giants like Amazon.com Inc. and Alphabet Inc.’s Google -- whose purchases of server chips for data centers have been a main engine of Intel’s profit and growth.

While demand for Intel’s server processors -- its most lucrative business -- picked up in the second quarter from the first, investors fretted that the division’s 9% year-over-year decline in sales may signal a long road to recovery. Intel’s Xeon chips, some of which sell for as much as a compact car, compete for business with souped-up offerings from Advanced Micro Devices Inc., and increasingly from the internal chip-design efforts of major cloud customers, who are keen to supply their own parts.

Sales to those cloud providers like Amazon’s AWS and Google dropped 20% in the recent period, Intel said on Thursday in its second-quarter earnings report. Gelsinger projected double digit-percentage sales increases for the data center business as a whole in the second half of the year, and said he expects pricing and market share to remain stable. Still, prices dropped in the June quarter because of competitive pressure, and the unit won’t match its revenue total for 2019 this year, he said.

The performance of the data center unit, known internally as DCG, is a bellwether for the progress of Gelsinger’s drive to restore Intel to leadership of the industry. Gelsinger, 60, who took the helm in February, has pledged to restore Intel’s technological leadership in the semiconductor industry, following a spate of production issues that delayed some of its most advanced chips. He has outlined plans to spend heavily to expand its reach in manufacturing to pose a stronger challenge to Taiwan Semiconductor Manufacturing Co. and Samsung Electronics Co.

The company said sales in the current period will be about $18.2 billion, compared with an average analyst projection of $18.3 billion. Shares dropped 5.5% at 11:55 a.m. in New York on Friday, paring their gain for the year to 6%.

Those numbers weren’t enough to raise optimism about Intel’s lukewarm performance against the backdrop of strong demand for semiconductors in general and widespread industry shortages, according to Edward Jones analyst Logan Purk. Investors want companies to set more ambitious targets, he said. They’re also concerned that Intel is never getting back to the 99%-plus share of the server chip market it once commanded, and will remain too dependent on PCs.

“I think it boils down to PC sales driving a bulk of outperformance, which likely reverses soon,” Purk said. In data centers, he said, “it will decline over time and these hyperscalers will begin to supply themselves.”

Gelsinger offered a far more upbeat outlook for personal computer sales, arguing that many households are now home to multiple devices and that a lot of older machines are due for replacement. He projected the PC market will grow again next year.

Investors and analysts have welcomed Gelsinger’s ambitious approach, while cautioning that it will take time to deliver results, and in the meantime could dent the company’s profitability. Intel on Thursday said its adjusted gross margin, or the percentage of revenue remaining after deducting the cost of production, will be 56.5% this year. For the third quarter, that measure will be 55%, narrower than analysts estimated. The company has traditionally delivered margins wider than 60%.

“We are investing for long-term leadership and we are not apologetic about that,” the CEO said in an interview on Bloomberg Television on Friday. “We are committed to be a growth company leading in technology and we are going to make those investments to have that occur.”

A dearth of semiconductors across many parts of the electronics industry will hit bottom in the second half of this year and persist until as late as 2023, Gelsinger said, echoing comments he made last month. That’s driving his optimism about the need for Intel’s expansion into the foundry business, where Gelsinger plans to build new plants that will be open to the production of designs by other companies, even competitors. Historically, Intel has designed and produced its own chips almost exclusively.

When asked about reports that he has considered trying to purchase chip manufacturer GlobalFoundries Inc. to accelerate that effort, Intel’s leader declined to comment.

“At this point, we would not say that M&A is critical, but nor would we rule it out,” he told analysts on a conference call Thursday. “Our view is that industry consolidation is very likely.”

Investors and analysts have welcomed Gelsinger’s ambitious approach, while cautioning that it will take time to deliver results, and in the meantime could dent the company’s profitability. Intel on Thursday said its adjusted gross margin, or the percentage of revenue remaining after deducting the cost of production, will be 56.5% this year. For the third quarter, that measure will be 55%, narrower than analysts estimated. The company has traditionally delivered margins wider than 60%.