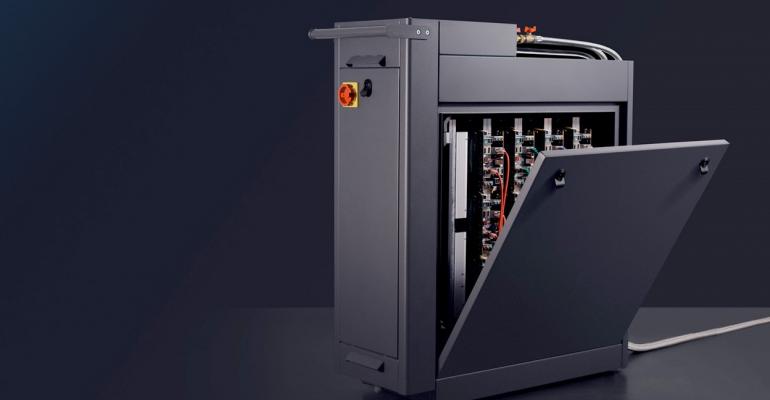 You Think You Know Data Centers? A Disruptive Open Computing Use Case

New use cases demonstrate that open computing is not only being adopted by the broader market, but is even pushing the boundaries of what a data center is.

Last week, a team from Omdia’s Cloud and Data Center Research Practice attended Tech Show London. Apart from joining an impressive keynote by the inventor of the World Wide Web, Sir Tim Berners-Lee, our team caught up with a few companies who are changing the face, and even the whole notion of the data center.

One such company was heat exchanger firm turned liquid cooling vendor, Provides, which was recently acquired by Wieland. The principal research scientist of Provides demonstrated a passive cooling method where refrigerator liquid is taken direct to chip relying only on gravity to move from a container at the top of the rack down to server CPUs and then is evaporated naturally up towards the container. The process repeats with the liquid likely to outlive the servers, according to Provides. We will compare this to other liquid cooling methods and discuss it in more detail in our upcoming Thermal Management Report.

Related: Open Compute Project Hardware Sales to Hit $46B by 2025

Another extremely out of the box application, which redefines what a data center even is, was discussed during a panel focused on the topic of improving data center sustainability through heat reuse. An innovator in the space that was highlighted by the panelists is Qarnot Computing. They provide cloud services through a distributed network of servers, housed in the heating systems of office and residential buildings. Qarnot would place several Tioga Pass open compute project (OCP) servers in a in-house designed liquid-cooled enclosure which, apart from providing cloud instances to Qarnot’s customers, acts as a radiator. In fact looking at the wall mounted enclosure, one would not suspect that it is anything different from the radiator that most of us have in our house.

Qarnot’s idea might sound like a distant, idealistic future but it has happened already. In 2018, Qarnot had already deployed open compute servers in about 300 smart heaters. The servers were configured with both an CPU and a GPU, targeted at high performance computing workloads. At Data Centre World London we also learned that now Qarnot partners with IT Renew and is installing second life, refurbished, servers in their network of distributed micro data centers/smart heaters – it is difficult to map the company’s offering in just one category.

Of course, an immediate question we asked on the subject of using data center computing for heating was – what happens in the summer when we don’t need radiators? Apart from heaters, the water used to cool Qarnot’s open compute servers can power hot water systems and boilers. They have already deployed such boilers at a financial institution in Finland and are proceeding with general availability of the server-powered boilers this year.

Omdia’s Cloud and Data Center Research Practice will discuss this and other topics at its first annual Research Forum hosted as a part of Data Center World in Austin, Texas on 28th March. At the half-day event, the analyst team will shine a light on the key trends and technologies data center solution providers and operators should care about – from AI to risk management, open computing, the future of the cloud and sustainability.

Register for a place here: https://www.datacenterworld.com/omdia-research-summit