Why a New Class of SSD is Needed

Value SAS uses native SAS from end to end, eliminating the need for any protocol translation and improving performance. 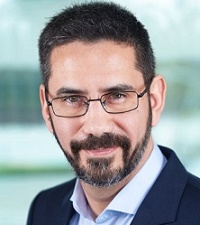 Solid state drives continue replacing hard drives in servers at a steady pace. IT managers now demand higher performance, larger capacities, improved reliability, and need more advanced storage technologies to address today’s abundance of data. Faced with the fundamental decision of choosing the right SSD for varying server workloads, IT managers need to understand the pros and cons of the SSD interfaces available. Due to their cost-effectiveness, millions of SATA-based SSDs have been deployed in servers, but their attach rate is expected to decline1 as application demands have surpassed their performance capabilities (chart 1). 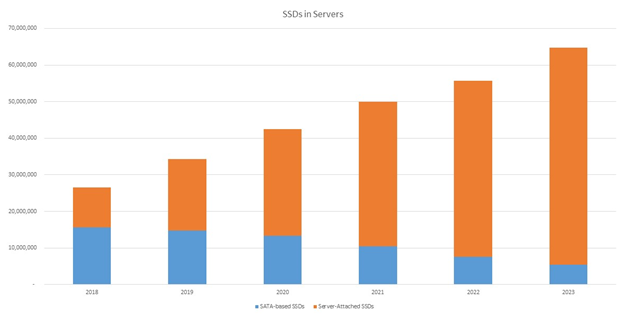 The three most common interfaces that connect SSDs to servers are SATA, SAS and NVMe™. The first two utilize the ATA and SCSI command sets, respectively, and have decades of maturity as a hard drive interface. NVMe is a more recent command set that operates over a PCIe® bus. It was developed for flash-based SSDs and next-generation volatile memory, and delivers a streamlined interface, as well as much higher performance.

Many in the industry believe that the SATA interface has reached its performance limit and has no future advancements planned on its roadmap. The plateaued SATA performance may become a bottleneck to servers, preventing the CPU from processing the required operations in a timely manner.  This underutilization of the server’s compute capabilities may also adversely affect the number of users that can be serviced simultaneously, possibly resulting in bad user experiences.

An opportunity now conveniently exists where enterprise SATA SSDs can be easily replaced in most server applications with a category of SSD called value SAS (vSAS). This new class of SSD is positioned in a sweet spot between enterprise SATA and enterprise SAS SSDs, and delivers faster performance, higher capacities, and additional benefits in reliability, manageability and data security, at price points that compete favorably with SATA2. Value SAS SSDs are now available on leading server platforms from the top server vendors in the world.

SSDs based on 12 gigabits per second (Gb/s) value SAS provide vast bandwidth and throughput improvements over enterprise 6Gb/s SATA, and for good reason. SATA is only half-duplex and uses just one lane/one direction at a time to transfer data. In comparison, SAS is full-duplex. This means that it can deliver much higher transfer rates between the host and SSD, as its single 12Gb/s port can support up to a 24Gb/s data rate (bi-directional) versus a single SATA port that only delivers 6Gb/s (unidirectional). SAS is typically used with 256 outstanding I/O queue depth versus 32 outstanding queue depth with SATA. This enables more efficient processing and deeper command queueing at the SSD level, which also results in higher performance and lower latency at the system level.

When SATA SSDs are deployed within a server, I/O commands must traverse through a software stack that cannot leverage the full performance potential of its flash memory as their instruction set was originally developed for inexpensive, low-end hard drives. This may leave servers with powerful, multicore processors and an abundance of DRAM waiting for operations or transactions to complete, resulting in an underutilization of compute resources.

By contrast, value SAS uses ‘native’ SAS from end-to-end, eliminating the need for any protocol translation, which in turn, improves performance results. SSDs based on SAS should generally plug directly into the same sockets that SATA SSDs are used in today and where connectivity is enabled through hardware RAID.  Since the majority of server shipments today include either a SAS HBA or RAID card, SAS and SATA SSDs can be used in the same drive bay, making it very easy to replace SATA SSDs with SAS SSDs, as there are no changes required to the server or infrastructure.

Many of today’s data centers, both large and small, utilize SAS-based hardware RAID to provide robust fault tolerance and performance, even when SATA SSDs are deployed as well.  This is due to IT managers viewing dual-port 12Gb/s SAS SSDs as the standard for high-performance, high-reliability and manageability in the enterprise.

Value SAS SSDs, on the other hand, are single-ported versions of enterprise SAS SSDs that provide much additional value over enterprise SATA SSDs at a price that positions them as a direct replacement. Since value SAS SSDs are based on enterprise SAS technology, they deliver higher price/performance ratios when compared to SATA SSDs, as well as higher server CPU utilization, better use of server resources, reduced total cost of ownership and ease of deployment.  Get ready for life after SATA!