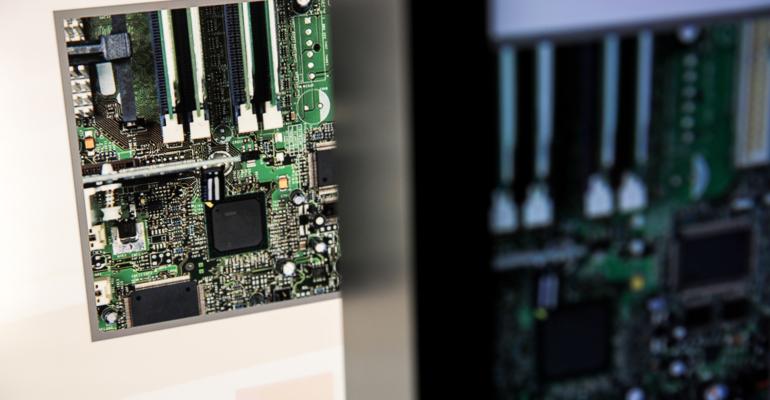 Bloomberg columnist Tim Culpan breaks down why restrictions on exporting US semiconductor chip tech to China is the right thing to do at the wrong time.

(Bloomberg Opinion) -- A new set of restrictions on Chinese access to US semiconductor technology may arguably have commercial and geopolitical merit, but the timing couldn’t be worse.

Shares of chip-industry leaders from Lam Research Corp. to Taiwan Semiconductor Manufacturing Co. plunged across the globe after the Biden administration announced stricter rules. These new measures are a natural evolution of Washington tightening the noose that got lowered around Beijing’s neck under President Donald Trump.

China is determined to catch up to foreign semiconductor leaders, and the US is just as adamant that this cannot be allowed to happen. The latest curbs halt access to equipment, software, and other technologies that Chinese chipmakers can use to make chips at 14-nanometers or less. Right now, the majority of manufacturing capacity in the country is at 28-nanometer or older. Smaller metrics indicate more advanced production, with TSMC currently offering 5-nanometer to clients.

Nobody should be surprised by these stiffer actions: Washington has been telegraphing its policies for months. And we should be careful not to overdramatize the impact on China, or the companies that wish to sell to the country: With a few exceptions, chipmakers there have so far failed to advance beyond 14-nanometers.

Yet, markets are having a meltdown. The Philadelphia Semiconductor Index, a widely tracked gauge of the sector, lost more than 9% in two days. That overreaction may be less about perceived loss of business in China, and more a function of the escalating troubles facing the semiconductor sector overall. The Biden administration’s action serves to amplify existing problems. 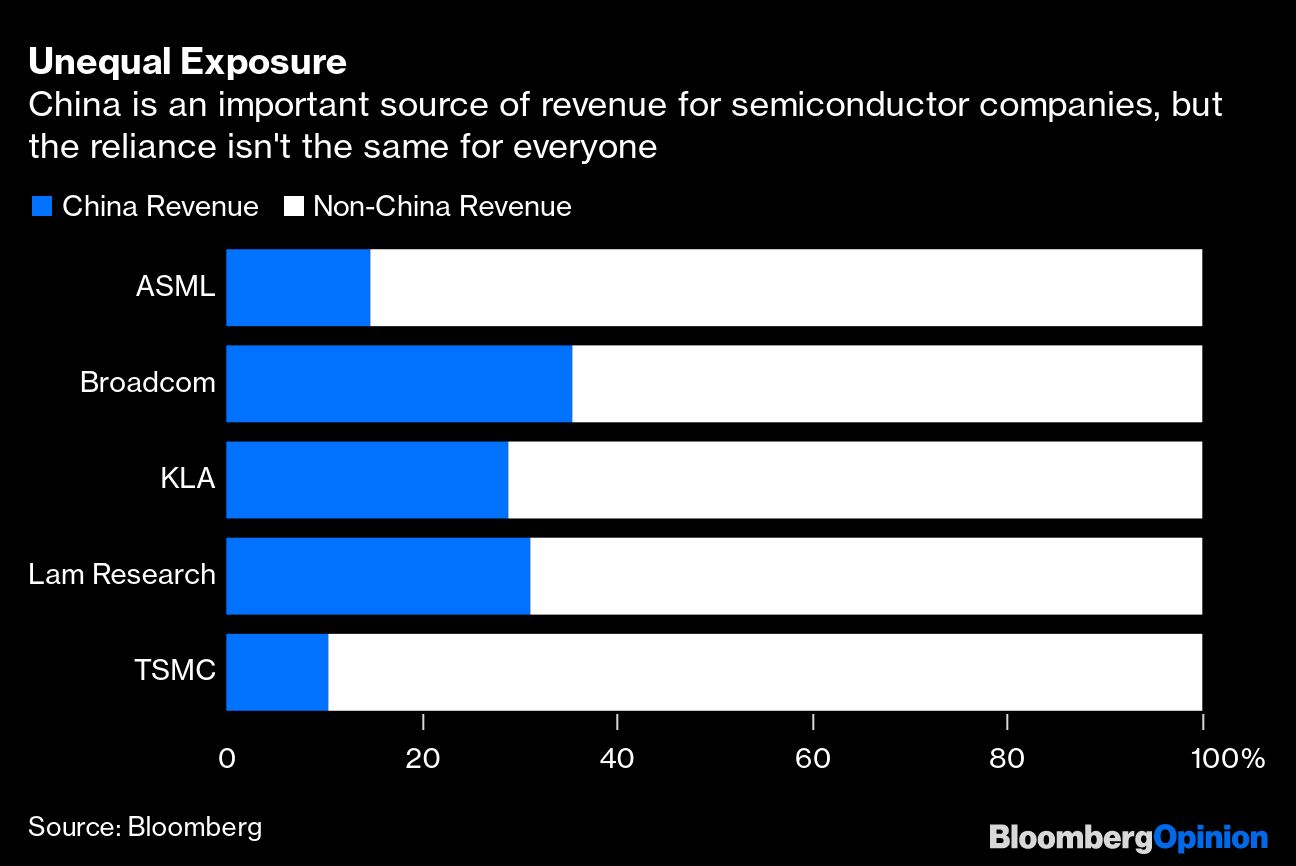 For the past two years, the global technology industry has been grappling with shortages while being forced to tackle escalating inflation. Now, central banks are stepping in to raise interest rates, and a recession seems almost inevitable. That will hit demand for chips used in devices from Apple Inc. iPhones to Amazon.com Inc. datacenters. Even before this phase of monetary tightening was in full stride, there were clear signs that important pockets of the chip industry were facing a glut.

Exacerbating the situation for both chipmakers, and those who supply them, has been an inability over the past year to deliver the crucial equipment required for expansion and technology advancement. ASML Holding NV, the Dutch company that has a lock on cutting-edge extreme ultraviolet machinery, is struggling to keep up with demand. That’s forced it to delay revenue recognition.

To understand why this market overreaction is not simply about a more aggressive US stance on chips, look at some of the key movers.

Lam Research’s 12% two-day slide makes sense because 31% of its sales come from China, so stricter rules will surely have an impact on its future sales trajectory. 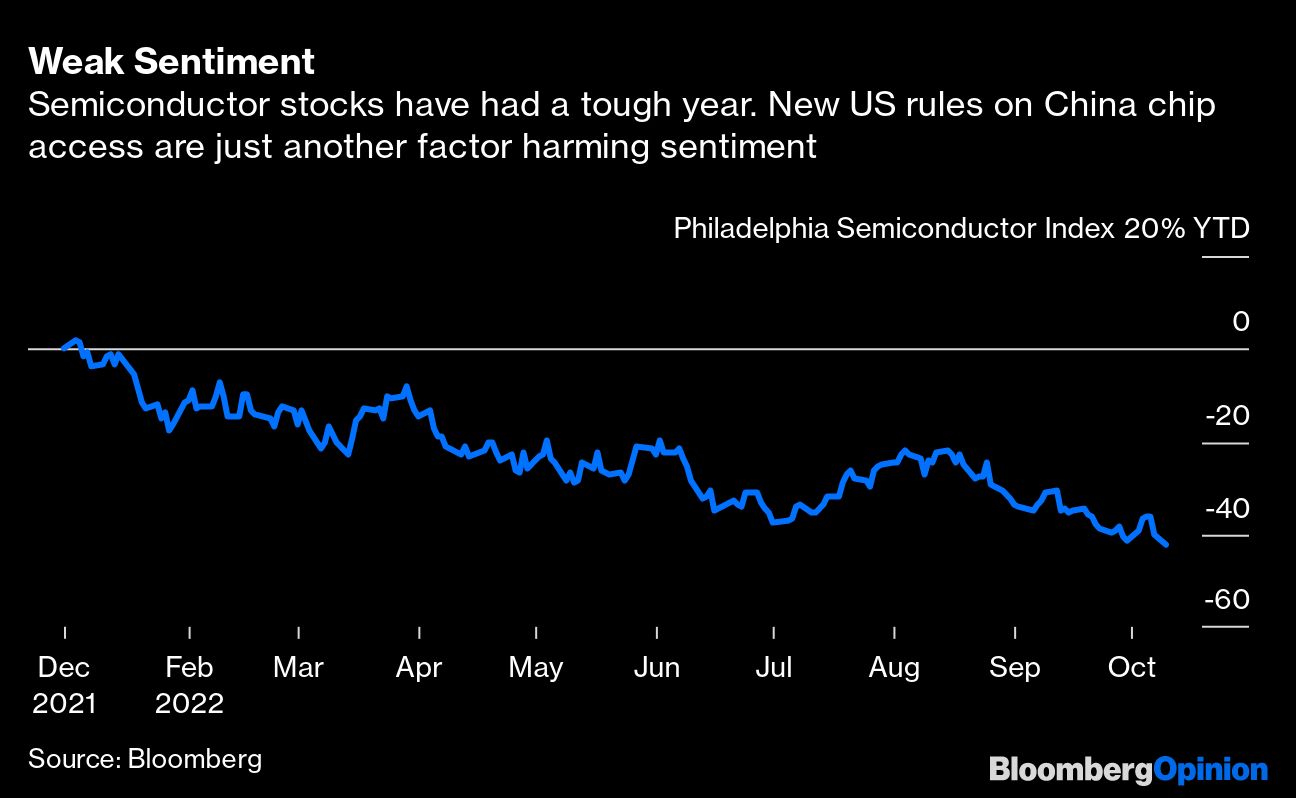 Yet TSMC’s US depositary receipts dropped 9% over the same two-day period, while its Taiwan-listed shares plunged as much as 7.1% on Tuesday (following a National Day holiday Monday) for the biggest intra-day drop in 27 years.  This outsized decline defies logic, if we’re to tie it simply to the latest US action, because the company gets just 10% of revenue from China. In fact, the world’s largest chip foundry has already borne the brunt of Washington’s actions after Trump banned it from supplying to Huawei Technologies Co., and Biden continued the policy.

TSMC is likely to say that the latest rules will have limited impact when it holds its earnings conference Thursday. Yet analysts will be listening intently for any signs of trouble beyond Washington, including a change to its spending plans, revenue-growth targets, or inventory levels.

Financial markets may not care much about the details contained inside the Commerce Department’s 139-page missive. Instead, what investors see is yet another reason why chips stocks are too risky to hold. The semiconductor sector was already sliding, Washington just gave it a nudge.