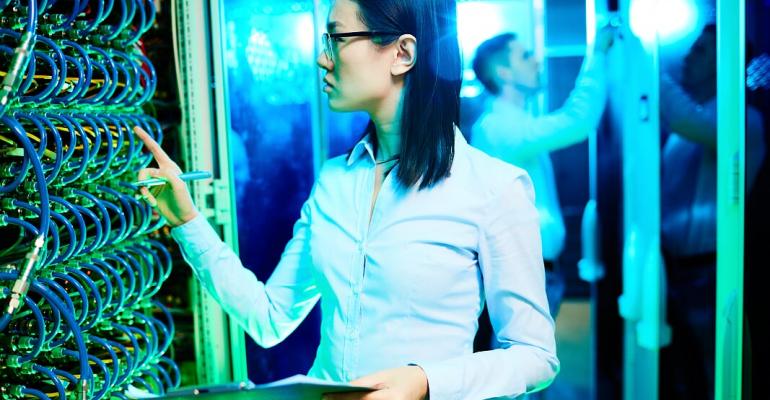 With the complexity of modern architectures, buying servers, storage, networking and software separately leaves you with a lot of work to do. That’s why solutions like Dell EMC Ready Nodes are becoming standard building blocks for a wide variety of platforms. Validated support for options like Storage Spaces Direct, vSAN, VxFlex (which you may know better as ScaleIO) and even SAP HANA means you can choose the hyper-converged (HCI) system you want and get the same simplicity and convenience for all of them. With hardware configurations built on the power of Intel Xeon Scalable CPUs, that you don’t have to tweak or test, you also get a single support option for handling issues at any level of the stack.

Having the networking built in isn’t just convenient. Switching from vendor-specific networking functionality to the kind of network function virtualization and software-defined networking provided by hyperconverged platforms and the Dell Open Networking switches used with Ready Nodes significantly reduces TCO, operating expenses and capital costs, while making it 3x faster to provision a new application or service. Using policies and templates to manage VLANs and network access speed up deployments and reduce admin error. Because so much of this is defined by software, there are more options for others to do some of the network setup and management required for the applications they create.

On the other hand, getting networking right is key to getting the full performance out of HCI. Just because the focus of hyperconverged infrastructure is compute and storage doesn’t mean the network can be an afterthought, especially as these clusters will almost always connect into your existing IP network. You need to think about listening for and managing multicast traffic, so it’s not broadcast to interfaces that aren’t in the multicast group. Network bandwidth will always be higher within a rack than across the data center. Demanding workloads will still need to be placed intelligently for fast access to resources, as well as the bandwidth to transfer the data they’ll be rendering. And even with HCI, networking remains complex — it’s often the primary cause of both deployment and on-going issues. Gartner suggests that as many as 25% of hyperconverged solutions might be getting connected to the wrong tier of the data center network.

The network fabric for hyperconverged infrastructure needs to be redundant, resilient and robust, but it’s not as specialized as a dedicated fiber channel storage network fabric. A VMware vSAN network fabric can be a more traditional three-tier hierarchical tree architecture, but if you want to scale it out horizontally, a leaf and spine architecture is more flexible. To scale, you can add more leaf switches and Ready Nodes as required.

You can choose a layer 3 routed fabric for the leaf and spine where the spine switches are not interconnected and Equal Cost Multi-Path routing load balances the layer 3 network, which is more scalable. This allows more VLANs across the fabric and supports overlay networks like VMware NSX that use VXLAN. Alternately, you can use a less complex layer 2 fabric where traffic between leafs and spine is switched.

For VxFlex, you can choose a two-tier or hyperconverged deployment, depending on whether you want to separate storage and compute nodes to avoid single points of failure or integrate them in the same server for lower cost and smaller footprint; both storage and compute/HCI Ready Nodes are available. Because of the amount of data distribution and replication (which happens continuously), VxFlex works best with a two-tier leaf and spine network that creates an equal-cost multipath routed, load-balanced mesh for predictable traffic flows. Because paths are never more than two hops away, the round-trip time is consistent. Layer 2 or 3 fabrics are supported, but routed layer 3 connections improve network stability and simplify scaling. Both vSAN and VxFlex benefit from a separate management traffic network isolated from the production network.

Storage Spaces Direct directly interconnects the servers with SMB3 using RDMA over 10Gb or 25Gb Ethernet with a Top of Rack switch connecting to each node, and that matrix of connections is why clusters are limited to 16 nodes. For a branch office or other small deployments, the minimum two-node configuration uses back-to-back connections using RDMA or even 10GbE. That can’t be expanded to a larger size, and a three-node cluster’s fault tolerance covers only the simultaneous failure of a single node and a single drive, so if you expect to expand, or need better fault tolerance, start with a four-node cluster. For larger systems, you can deploy in 16-node clusters.

There are two possible configurations for host networking. In fully converged mode, one or two network adapters (depending on the Ready Node chassis) are used for both host management and storage traffic. Each port from the adapter on each server is connected to a different switch in a redundant TOR network fabric. You can also configure a dedicated management network using 10GbE or 1GbE ports for host management and VM traffic, connected to either the same TOR switches as the storage traffic or a separate network fabric.

Whatever Ready Node platform and configuration you pick, there’s plenty of help available with networking. The Dell EMC Fabric Design Center is an online service that will help you create the right network configuration. Dell also provides networking templates and diagrams you can use for guidance, using the software-defined networking tools you’re familiar with. They also cover the configuration required if you need to connect the Ready Node deployment to other networking equipment in the new spine, with setup and validation instructions.  Or you can have the network preconfigured for you by Dell EMC, making your rack of Ready Nodes ready to go.

If you’re taking a more wholesale look at the network you need to get the most out of your infrastructure, Dell’s new NFV Advisory Service will help you move into the software-defined networking world. It starts with a workshop to understand your issues and deliver design recommendations, with an on-site assessment of how ready your existing infrastructure and operations is for SDN and an ROI model to show what the cost savings will be.