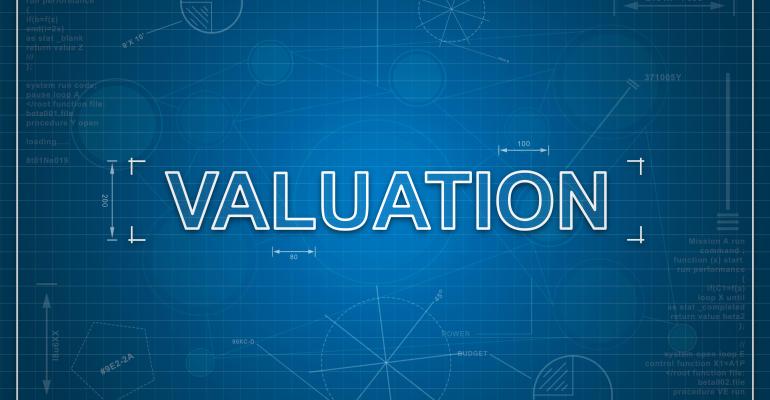 With valuations down across the board for data center REITs, market prognosticator Jim Chanos challenges how the market applies valuation to digital infrastructure firms.

(Bloomberg Opinion) -- Celebrated contrarian Jim Chanos has a mixed record. Although his prediction of Enron’s demise brought renown, his bet against Tesla Inc. has proved painful. When it comes to data centers — the gigantic hangars that house racks of computer servers for major corporations — he’s making a credible challenge.

The bear case isn’t immediately obvious. We’re creating ever more data. And as private equity funds have been making rich bids for these assets, the listed players are risky to “short” (selling borrowed stock in the hope of buying it back cheaper). Only the industry giants are viable targets – Equinix Inc., capitalized at $57 billion, and Digital Realty Trust Inc., with a market value of $35 billion. Most major Wall Street brokerages rate them “buy” or “neutral.”

But investors rightly have doubts. The stocks were already underperforming the real estate investment trust sector in the US this year before the Financial Times revealed Chanos’s negative view in June. Analysts at Morgan Stanley summarized the concerns: the outlook for demand and pricing, low returns on capital, competition, cost inflation, higher finance costs and the risk of “obsolescence.”

That fits with Chanos’s reported thinking. The major cloud firms – Amazon.com Inc., Alphabet Inc.’s Google and Microsoft Corp. – are the industry’s biggest customers, but they’re building their own facilities too. Chanos reckons that means they’re really competitors. In other words, the cloud providers will nab future growth at the data centers’ expense.

To be sure, the REITs have a future. Many corporations will want to maintain servers of their own in data centers, rather than rely exclusively on the cloud. Facilities in cities close to end users provide fast connection speeds — which in many cases are essential. Cloud companies will still rent data centers as they enter new markets. Equinix boss Charles Meyers says he's not in a "zero-sum game" with the cloud majors.

The snag is that none of this guarantees the REITs are destined to grow as fast as their stock-market valuations imply.

The harsh reality is that the long-term trend has been intense competition putting deflationary pressure on rents. Things may be looking up today, but this could be a blip. Pandemic disruption hampered new developments as demand accelerated. Vacancy rates in the major US markets are down to 4%, from 10% in 2019, according to analysts at UBS Group AG. In the second quarter, Digital Realty re-leased sites at 3% above existing rents, and Equinix clocked record bookings.

It’s hard to be confident this marks a decisive break with history. Moreover, construction, maintenance and energy costs are rising; higher rent renewals may not offset these. Cloud giants could slow investments next year as they move from expansion to “digestion,” according to Morgan Stanley analysts.

Many investors value these firms on multiples of funds from operations (FFO, a property-sector measure of cash flow generated by the business) after deducting so-called maintenance capital expenditure. This capex is spending the companies say is required to sustain revenue as opposed to win business (Accounting standard-setters don’t draw such a distinction, making it an opaque metric). The worry is that this charge may have to rise. 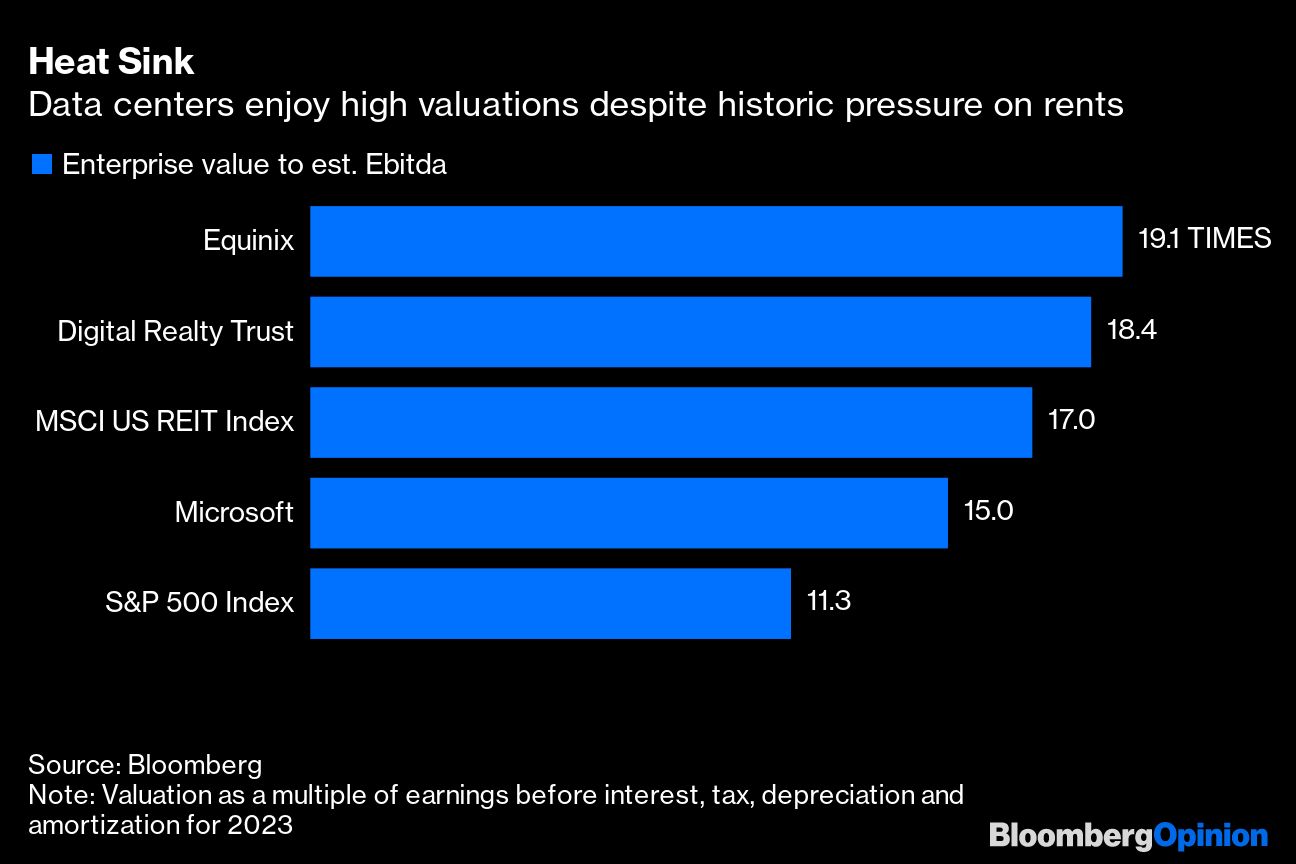 Maintenance capex at Equinix has been low as a percentage of revenue, providing a tailwind that may not endure, according to Barclays Plc research. On forecasts compiled by Bloomberg, Equinix’s adjusted FFO is expected to increase by about 9% compounded annually from 2021 through 2024. That’s roughly in line with what Morgan Stanley expects for the REIT sector overall. For Digital Realty, the comparable figure is only 6%.

Meanwhile, the financial environment is worsening. REITs pay out most of their taxable income in dividends to qualify for tax breaks. To fund expansion, the data center firms raise debt and sell equity. Even leaving aside the absurdity of a business model that dispenses massive dividends and then demands shareholders provide cash, debt and equity are getting more expensive. That increases the dependence on asset sales to fund growth. 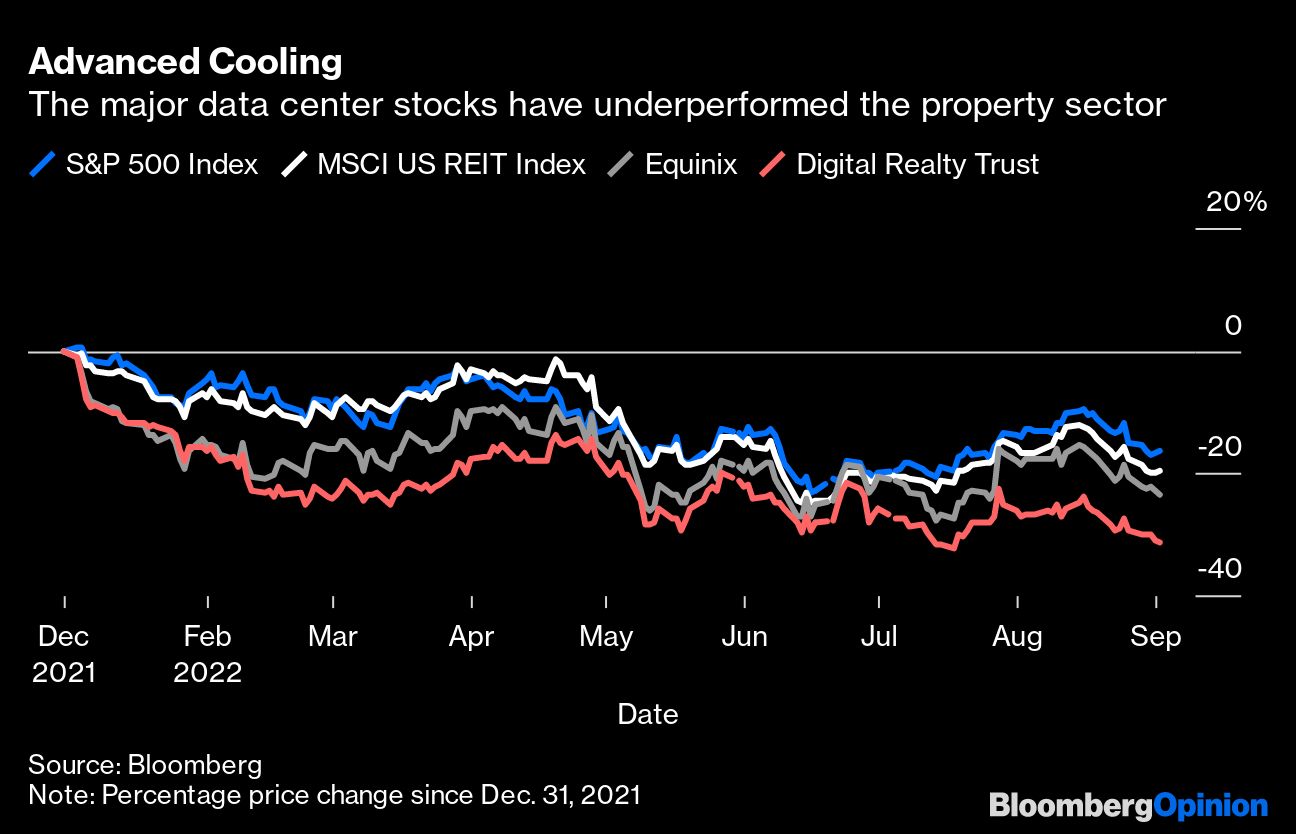 Despite all these uncertainties, valuations look high. Digital Realty is trading at 16.3 times expected FFO per share in 2023, and Equinix 27.6 times, versus peers just under 16 times, Bloomberg data show. Looking at enterprise values relative to expected earnings before interest, tax, depreciation and amortization next year, multiples are also still above the REIT average despite the declining shares.

Signs of a slowdown in cloud investments, or a shock on costs and capex, would surely accelerate the ongoing de-rating of the sector by undermining the narrative that the industry is in a positive cycle. The challenge remains: Why do these stocks deserve premium valuations given mounting cost pressure and intense competition?