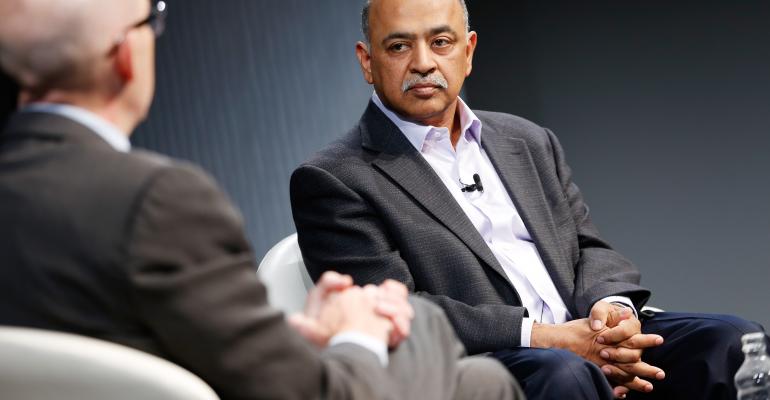 Why IBM Choosing Arvind Krishna Over Jim Whitehurst Was Wise

It was widely expected that Red Hat's Jim Whitehurst would be Ginni Rometty's successor. Instead, the job is going to Arvind Krishna -- and that's probably a good thing.

It's official: Jim Whitehurst isn't going to be CEO of IBM anytime soon.

Last week's announcement of a changing of the guard at IBM was a surprise, but not because Ginni Rometty will be stepping down as the company's CEO and president. The surprise was mostly with the person the board voted to replace her – Arvind Krishna, IBM's senior VP for cloud and cognitive software, as well as the person IBM credits as the principal architect of its cloud strategy and its $34 billion acquisition of Red Hat. Jim Whitehurst, Red Hat's CEO who's now also a SVP for IBM, will be taking over as Big Blue's president. Rometty will retain her position as the company's board chairman through the end of the year, then retire after a 40-year career at IBM.

Many, if not most, IBM and Red Hat watchers had been figuratively betting that the next CEO would be Whitehurst, who spent six years as chief operating officer at Delta Airlines before being snagged by Red Hat for the CEO position. Although the notion of an airline executive talking control of a cutting-edge tech company seemed questionable, it turned out Whitehurst was already a dyed-in-the-wool Linux user with a good grasp of the open source model and how to monetize it.

To say that Whitehurst has done a good job at Red Hat would be an understatement. When he walked through the door at the company's Raleigh, NC headquarters for the first time as CEO in January 2008 – just as the "Great Recession" was gaining traction – the company's total annual revenues were around $500 million. Under his leadership, that figure passed the billion dollar mark by the end of the company's 2012 fiscal year. By 2018, the year that IBM announced its intentions to acquire the company, revenues had reached nearly $3 billion.

Partly due to his track record, but also because of his championing of the open source development model, Whitehurst has garnered rock star status within the open source community. Some have expressed disappointment that he's not going to be the one to take over for Rometty, but if social media is any indication, most seem perfectly fine with this new status quo.

The IBM board's decision to vote for an Arvind Krishna and Jim Whitehurst ticket was probably more than prudent – and benefits both Red Hat and the open source community.

For starters, the time is not right for Whitehurst to leave his leadership role at Red Hat, which still very much needs Whitehurst's steady hands on the reins as well as his advocacy to protect its interests at IBM. Pulling double duty as CEO of both IBM and Red Hat would most likely result in neglect in both of those areas, which could prove fatal to Red Hat at this stage of the game.

Another consideration is IBM's need for change in its corporate culture.

It's no secret that IBM and Red Hat's cultures are miles apart, and while IBM likes to brag that it was an early adopter of open source, its internal culture notably lacks much of the agility that a modern tech company needs to survive.

Red Hat, on the other hand, is agile and readily adapts to change. That's not only because it's younger and smaller – IBM's been around since 1911 and in size is an aircraft carrier next to Red Hat as a tug boat – but also because of "the open source way" – Whitehurst's corporate philosophy that was inspired by the open source development model.

Under Whitehurst, much of the decision-making responsibility at Red Hat is handed to the teams doing the work instead of having all decisions made by upper management. Whitehurst has said that to do otherwise stifles innovation.

While Whitehurst might seem to be the perfect choice for bringing change to IBM's internal culture, that job may be better orchestrated by Krishna, who has a 29-year history at Big Blue. As an IBM insider, Krishna naturally understands IBM's strengths and weaknesses, and would be better prepared to bring meaningful change without creating discord within a rank and file that might resist changes coming from an organizational outsider.

As president, Jim Whitehurst will be in the position to help guide Krishna (who has asserted from the beginning that he has hopes that Red Hat will end up having a positive effect on IBM's culture) while remaining unequivocally Red Hat's leader.