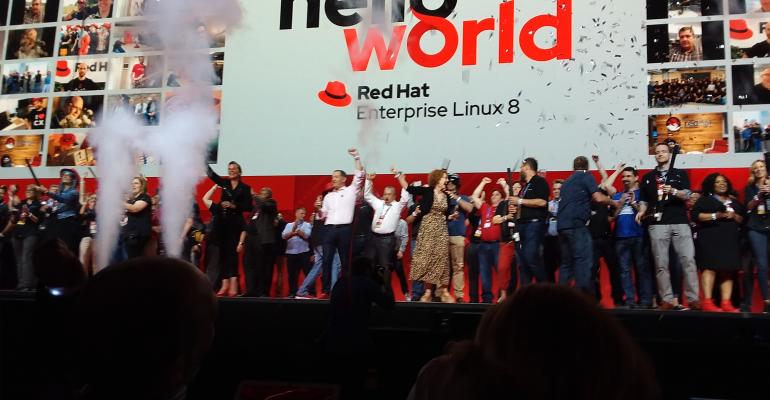 BOSTON -- With major releases of Red Hat Enterprise Linux and the OpenShift container platform being rolled out on day one of Red Hat Summit, you would have thought the opening keynote would have been all about why RHEL 8 and OpenShift 4 are both the best thing since sliced bread.

After all, RHEL is the company's flagship product and this was its first major update in five years, and OpenShift defines Red Hat's view that the future will be dominated by open hybrid clouds.

There were more pressing issues on Red Hat's plate, however, than merely selling product.

With the completion of the $34 billion Red Hat IBM deal just around the corner, CEO Jim Whitehurst used Tuesday's keynote as a way of reassuring customers that Red Hat would remain Red Hat, regardless of whether the stock was held by the public at large or completely by Big Blue, a proprietary company -- albeit with open source leanings.

In most ways the keynote was deceptively like any other opening keynote at any other single vendor conference. A parade of happy customers were brought onstage to brag about themselves and praise Red Hat for helping to ease their paths to the digital age. This included Rahul Samant, EVP and CIO at Delta Air Lines, the company where Whitehurst had been COO just before taking the reins at Red Hat.

But before the parade of customers, and the pep rally for Red Hat and its commitment to the open source development model and "the open source way," Whitehurst introduced IBM CEO Ginni Rometty and the two sat on upholstered arm chairs to have a discussion.

IBM has always loved open source, even before there was officially such a thing as open source, Rometty reassured the audience.  Red Hat will remain independent, because that's the only way it's development model will work.

She also pointed to the billion dollars Big Blue poured into Linux a couple of decades back, which had solidified Linux's uptake in data centers and hastened the demise of proprietary Unix.

"That was a lot of money back then," she said.

"It's a lot of money now," Whitehurst offered.

"So is $34 billion," retorted Rometty, bringing laughter and applause.

She didn't have to work hard to win the crowd over. Most seemed to have already accepted that Red Hat would be in good hands once IBM owned the stock, and accepted at face value the promise Rometty had made last fall when the Red Hat IBM deal was first announced.

"I don't have a $34 billion death wish," she said later in the conversation. "I didn't buy them to destroy them." That, again, brought laughter and applause.

Near the end of the show, after a litany of customers and Red Hat developers had crossed the stage to sing their praises of all things Red Hat, Whitehurst brought Microsoft CEO Satya Nadella on stage.

The Microsoft executive had gone to great lengths to be at the conference to show support for the "new" Red Hat. On Monday he'd given a keynote address in Seattle at Microsoft Build, and had flown from the West Coast to downtown Boston's Atlantic waterfront to express support for Red Hat going forward.

Officially, he was there to talk about the general availability of Azure OpenShift, a partnership effort between Microsoft's cloud and Red Hat. That was only mentioned in passing, however. Mostly the conversation centered on Microsoft and Red Hat's history, and how the two companies both planned to work together in the future.