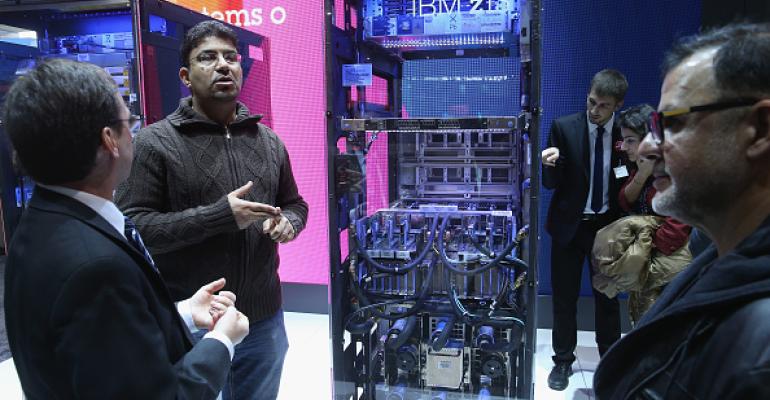 IBM posted higher second-quarter revenue growth than analysts expected Wednesday, causing its shares to jump more than 4 percent • But the 2 percent revenue gain was driven primarily by sales of mainframes, not the company's key strategic businesses around newer tech, such as cloud, AI, and security, Bloomberg reported • Still, the cloud business did grow 18 percent during the quarter and so did the Watson group within IBM's broader cognitive solutions unit, the company said

Gerrit De Vynck (Bloomberg) -- IBM may have won back some investors’ trust after posting renewed sales growth, but it’s been driven mostly by older business units instead of the newer technology the company touts as key to its future.

Revenue gained 2 percent, adjusted for currency fluctuations, to $20 billion in the second quarter, International Business Machines Corp. said Wednesday. Analysts estimated $19.9 billion. Profit, excluding some items, was $3.08 a share, compared with analysts’ projections of $3.04 a share. The shares jumped as much as 4.2 percent, the most intraday since October.

Most of the revenue beat came from the company’s mainframes, the massive computers that help power global financial transactions and other complicated calculations for businesses and governments. The company is in the midst of a new sales cycle for these computers, which is turning out “stronger than nearly anyone expected,” Bernstein analyst Toni Sacconaghi said in a note. Once that cycle is over, it will be difficult for IBM to repeat results like this quarter’s, Sacconaghi said.

That’s a different story than the one the company likes to tell. In advertisements, conference calls and executive interviews, IBM underscores its newer businesses: cloud computing, its Watson artificial intelligence and security software. Grouped together these units make up what IBM calls its “strategic imperatives,” an umbrella category that produced $10.1 billion, or more than half, of the quarter’s revenue.

Still, spending on research and development was down around 5 percent compared to last year. IBM’s cognitive solutions unit, which includes Watson, generated revenue of $4.6 billion in the period, a decline of 1 percent year over year, if currency changes are accounted for. Adjusted profit margins, another key measure for investors, are stagnant, sitting at 46.5 percent compared with an estimate of 47 percent.

Revenue from cognitive solutions fell because much of the unit is related to transaction software, which is a declining business, Chief Financial Officer Jim Kavanaugh said. Watson is actually growing, he said, though the company doesn’t break out its revenue.

On the positive side, IBM’s cloud business grew 18 percent, adjusting for currency changes, to $4.7 billion in the quarter. That’s an improvement from the disappointing 14 percent the company posted earlier this year.

The company’s results “build hope that IBM’s transformation is playing out,” yielding strong hardware results and faster growth in cloud services, Morgan Stanley analyst Katy Huberty wrote in a note. She rates the stock a buy.

In April, investors sent the stock tumbling the most in two years after first-quarter growth in the cloud business slowed and margins across the company narrowed.