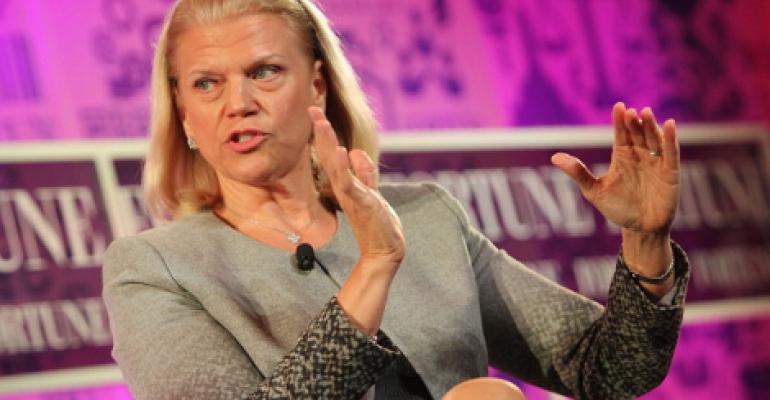 IBM Gains Most in a Decade After Surprisingly Positive Results

Gerrit De Vynck and Olivia Carville (Bloomberg) -- International Business Machines Corp. shares rose the most in a decade after the company gave a positive forecast for 2019 and fourth-quarter results beat analysts’ estimates, led by its business that helps companies and governments manage their technology.

Chief Executive Officer Ginni Rometty has been touting IBM’s newer offerings in the cloud and artificial intelligence as agents for growth. But in the past year, increases have come from more traditional markets instead. IBM’s consulting business flipped from declines into growth in the period ended Dec. 31, with revenue gaining 4 percent to $4.3 billion in the Global Business Services unit from the period a year earlier.

The shares surged as much as 10 percent, the most intraday since January 2009, to $135 in New York Wednesday. They had been down 25 percent in the past 12 months through Tuesday’s close, before the results were released.

IBM’s revenue for the fourth quarter was $21.8 billion, beating the average analyst forecast of $21.7 billion. Earnings were $4.87 a share, also beating analysts’ forecasts. IBM said it sees adjusted earnings per share of at least $13.90 in 2019. Analysts had predicted $13.89.

Still, IBM has much to prove to some investors waiting to see the fruits of a multi-year turnaround plan. After six years of revenue declines, IBM showed two consecutive quarters of growth in the first half of 2018. However, those were largely due to its legacy mainframes, the massive computers that help power global financial transactions and other complicated calculations for businesses and governments.

Revenue from cloud-based offerings grew about 12 percent to $19.2 billion in 2018, but that’s about half the growth rate of last year. IBM agreed to buy software maker Red Hat Inc. for $33 billion in October to jump-start its efforts to catch up in the cloud. Rometty called the purchase “a game changer” for IBM.

“While IBM delivered a decent quarter relative to expectations, we still have reservations about the future growth prospects for the company,” Josh Olson, an analyst with Edward Jones & Co., said in a note.

IBM also announced a win for its cloud business. The company signed a major extension of its agreement to sell IT services to French bank BNP Paribas SA. The eight-year deal is worth about $2 billion to the company, according to a source familiar with the agreement.