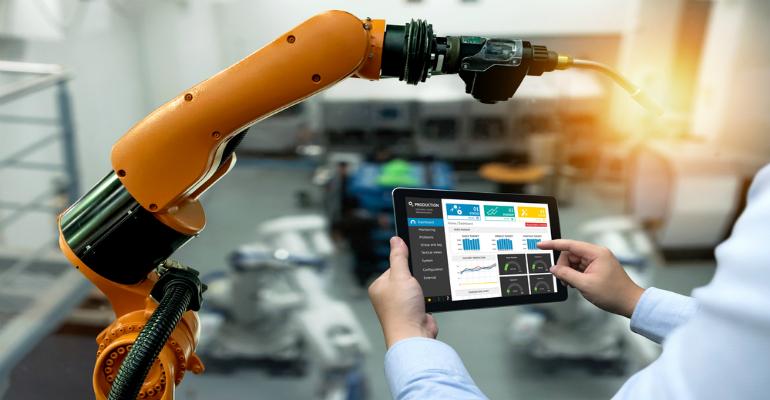 In a bid to get into the artificial intelligence game, Hewlett-Packard Enterprise launched an AI-powered prescriptive maintenance solution for manufacturers. But is it too late?

Somewhat late to the party, Hewlett-Packard Enterprise (HPE) has waded into the world of artificial intelligence (AI) with a prescriptive maintenance offering for manufacturers — the first in a planned series of vertical AI solutions.

In manufacturing, HPE hopes to beat established competitors by offering a three-pronged approach starting with an AI planning phase, a proof-of-concept phase, and a rollout phase that might include an onsite, high-performance computing system.

But will it be enough?

“The nuances and details will be different for every customer, so we have to take each of them through this journey,” says Pankaj Goyal, HPE’s vice president of AI business and strategy.

To this end, HPE announced “Digital Prescriptive Maintenance,” an AI solution to help manufacturers not only predict that a piece of equipment is about to fail, but take action — such as order a replacement, assign an engineer to fix it and schedule down time; hence, the term “prescriptive” instead of “predictive.”

Prescriptive maintenance is not as easy as it sounds. If the equipment has scheduled downtime, then this might affect the supply chain, timetables and deliverables in other parts of the manufacturing operation. (For more on this, check out “Internet of Things Exposes Blind Spot: Configuration Management.”)

In order to come up with the right next steps, prescriptive maintenance needs artificial intelligence and machine learning to figure out what those steps should be. Put another way, machine learning turns a tsunami of Internet of Things (IoT) data into actionable insights, says Forrester senior analyst Paul Miller.

Both predictive and prescriptive maintenance rely on a lot of historic and current data, Miller says. This data is used to build machine-learning models that identify normal behavior and the first signs of a problem.

On the scale of AI and machine-learning sophistication, the needle doesn’t reach very high.

“To call these valuable, complex and impressive feats of machine-learning ‘artificial intelligence’ may be to exaggerate what’s actually going on most of the time,” Miller says.

“It’s about where you are in your journey,” HPE’s Goyal says. “If you want to play around, cloud gives speed and cuts down development time. But there are cost, performance, flexibility and storage bottlenecks. If you’re serious about deep learning, as you scale up, AI becomes better from an on-prem perspective.”

Of course, HPE’s three-pronged approach is still in the early days. There are only a couple of pilots running in Europe. Meanwhile, GE Digital, Siemens and IBM have already staked out the predictive and prescriptive maintenance market, each touting impressive customer wins.

Being late to the game, though, might not be such a big deal. Manufacturers have been slow to adopt IoT and AI. Last year, a Forrester survey found that less than half of executives in the manufacturing sector see digital technology as a major driver of business strategy.

This year, in terms of timing, signs point to a kind of resurgence. An IDC report says that discrete manufacturing will be the third largest industry for AI spending this year, with $2 billion going toward a range of use cases, including preventative maintenance.

Top-tier systems integrators, such as Accenture, PwC, Deloitte, and Ernst and Young are leading the resurgence. They’re turning the corner: pilot projects into full-blown rollouts, point solutions into digital-transformation journeys. HPE also sees channel partners as vital in its push to bring AI to manufacturing and other verticals and is working to get them up-to-speed.

But Goyal warns that this part of the industry, like HPE itself, is just starting out.

“Many channel partners want to do AI, but few are ready,” he says.