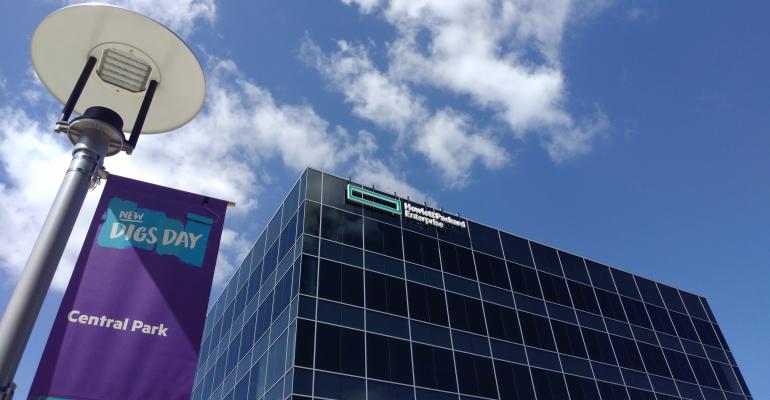 The company said it was already building a “state-of-the-art” new campus in Houston but will keep its technology innovation hub in San Jose.

Nico Grant and Ian King (Bloomberg) -- Hewlett Packard Enterprise Co. will move its headquarters to Houston, a major shift for a founding Silicon Valley computer maker now seeking haven in a lower-cost region while making way for a new generation of nimbler mobile and consumer-web giants.

The company said it was already building a “state-of-the-art” new campus in Houston, the fourth-largest U.S. city. HPE also reported quarterly revenue that topped analysts’ predictions, suggesting that businesses are upgrading their data center hardware during the coronavirus pandemic.

HPE was created in the 2015 split of one of the consummate Bay Area technology companies, Hewlett-Packard Co., which was founded in 1939 in a Palo Alto garage. The move to Texas comes amid a broader re-evaluation, motivated by pandemic-enforced work-from-anywhere arrangements, by individuals and companies opting to leave behind a region known for its high cost of living and difficult commute.

Chief Executive Officer Antonio Neri has been working to turn around HPE, a maker of servers, storage hardware and networking gear, which had reported declining revenue in all but one quarter since separating from personal-computer maker HP Inc. Neri is reducing the company’s overhead costs, exiting unprofitable businesses and chasing the hybrid-cloud market, in which businesses store and process some of their information in corporate data centers and some with public cloud companies.

Sales in the quarter ended Oct. 31 were little changed from a year ago at $7.2 billion. Analysts, on average, estimated $6.9 billion, according to data compiled by Bloomberg. Profit, excluding some items, was 37 cents a share in the fiscal fourth quarter, HPE said Tuesday in a statement. Analysts had projected 34 cents.

The spread of Covid-19 and the economic slowdown it triggered had suppressed demand for networking and computer hardware and services. Now that companies have settled into remote work for many employees, they’re investing in gear to make that more efficient.

“The global pandemic has forced businesses to rethink everything from remote work and collaboration to business continuity and data insight,” Neri said in the statement. “We saw a notable rebound in our overall revenue, with particular acceleration in key growth areas of our business.”

Hewlett Packard Enterprises follows a handful of other companies exiting at least in part from the San Francisco Bay Area. Newly public data-mining provider Palantir Technologies Inc. moved to Denver from Palo Alto earlier this year, while besieged e-cigarette maker Juul Labs Inc. is relocating to Washington from San Francisco. Charles Schwab Corp. said last year its headquarters will shift from San Francisco to Westlake, Texas. Many individuals, encouraged by laissez-faire work-from-home rules and put off by the cost of living in California, are also on the move.

As Hewlett Packard Enterprises and its predecessor company receded from prominence in recent years, newer companies -- such as Alphabet Inc., Apple Inc. and Facebook Inc. -- have taken their place in the Silicon Valley pantheon.

Fiscal fourth-quarter sales increased 6% from the prior period. In the current quarter, HPE projected that profit, excluding some items, will be 40 cents to 44 cents. That compares with an average analyst prediction of 35 cents, according to data compiled by Bloomberg. The company said sales will decline from the preceding period at a percentage in the mid-single digits, in line with normal seasonal patterns. A decline of 5% would indicate sales of about $6.84 billion. That compares with an average analyst estimate of $6.63 billion.

The company will keep its technology innovation hub in San Jose, at a relatively new building, CEO Neri said on a conference call with analysts. Administrative work will be centered at the new Texas headquarters. Consolidating more expensive facilities in California will lead to real estate cost savings, he said.

No staff reductions are associated with the move, HPE said in the statement. The company has locations in several cities in Texas, including Austin and Plano, and has more than 2,600 workers in Houston, according to a statement from the office of Governor Greg Abbott.

HPE shares were little changed in extended trading after closing at $11.20 in New York. They have declined 29% this year.