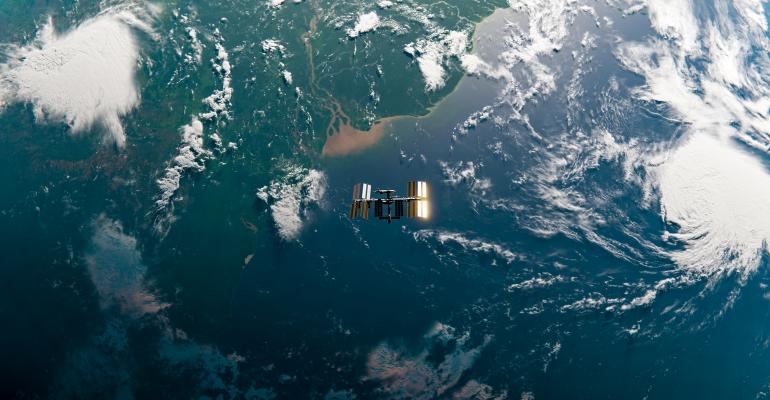 Space Is the Final Frontier for Data Centers

There are good reasons to send 19-inch racks into orbit, and beyond.

Last year marked the first time humanity deployed a conventional data center in space. The HPE Spaceborne Computer-2 – a set of HPE Edgeline Converged EL4000 Edge and HPE ProLiant machines, each with an Nvidia T4 GPU to support AI workloads – was sent to the International Space Station in February of 2021.

This is the first off-the-shelf server deployed in space to run actual production workloads.

"It is not hardened," said Mark Fernandez, principal investigator for Spaceborne Computer-2 at Hewlett Packard Enterprise. "The goal is to avoid the time and cost to harden a computer, so you can go with the latest technology."

Time for a hardware refresh

Elsewhere in space – on Mars landers, in satellites, in space station control systems – most of the computers are decades old.

"The hardened processors available today are circa 1995, 1996," Fernandez told Data Center Knowledge. Not only are they slow but it's hard to find developers who can write software for these machines, he said.

Plus, all of today's applications are designed to run on modern computers.

The ISS itself runs on Intel 80286SX CPUs that date back to the late 1980s. There are also more than a hundred laptops on the ISS, as well as tablets and other devices. They are used as remote terminals to the command and control multiplexer demultiplexer computers, as well as for email, Internet, and recreation.

Key systems run on hardened hardware that is protected against radiation. That means that they use either redundant circuits or insulating substrates instead of the usual semiconductor wafers on chips.

Developing such a computer takes years, as does testing. Missions are also planned years in advance. By the time such a computer gets to space, it's woefully out of date.

"We want to take data center quality pizza boxes up to space," Fernandez said. To solve the problem of protecting the computers against radiation, HPE decided to try using software.

The first attempt to put a server in space, the Spaceborne Computer-1, was launched in 2017 and spent nearly two years up on the space station, though the mission was only scheduled to run for one year.

That mission had three goals, according to Fernandez.

"First, can you take a computer right off the factory floor, package it up to fit on a rocket and get it a space station," he said. "Second, can you train astronauts to install it and get it working. And third, once it's working, will it give you the right answers, and for how long?"

Spaceborne Computer-1 sat in a locker on the ISS. The lockers are designed to mount inside a space station. Inside that locker, HPE put a standard 19-inch rack, Fernandez said. "So we didn't have to modify the servers at all."

That first mission had two servers, running a suite of internationally recognized benchmarks, 24 hours a day, seven days a week, 365 days of the year.

"We had to prove it worked," Fernandez said. "We wanted to stress the CPU, stress the memory, stress the disks. With the benchmarks, you know what the results are supposed to be, so when the job finishes, you can see if you got the right answer. We did 50,000 benchmarks and not once did we get an error."

The same benchmarks were run on Earth on an identical system.

The servers were still working when NASA shut them down and brought them back down to Earth.

"They wanted to take a look at them," he said.

The space-based system had 20 solid state disk drives, of which nine had failed over the course of the mission. With the Earth-based twins, only one drive had failed.

"We also had five times the number of correctable errors on space than on Earth," said Fernandez. "But they were correctable, and corrected themselves. So we're good there. The main concern was the solid state disks. That's where we paid the most attention in Spaceborne 2."

This time, NASA also wanted a system that would last for at least three years – the length of time it would take to go to Mars and back. So HPE doubled the hardware; now there are four servers total, two in each locker.

"The Edgeline 4000 includes a GPU so we can do AI, machine learning, and image processing," Fernandez said.

As of mid-December, none of the drives in the new system have failed, he said. However, the servers aren't running the intense benchmarks they were running before, so the computers aren't stressed as much. This time around, the Spaceborne 2 is running actual production workloads.

It may be small, but the first edge computing data center is now operational in outer space.

One of the jobs it's doing is DNA analysis. Previously, astronauts would have their DNA tested once a month, and the data sent down to Earth for processing.

Now the processing takes place on the ISS, and just the results are sent down to Earth. It reduces the amount of data that needs to be transmitted by 20,000 times, Fernandez said.

"Now the scientists here on Earth are about to think about things that weren't even conceivable before," he said. "When I can process the data in 13 minutes and download the results in two seconds, I can monitor astronaut health daily instead of monthly."

Researchers can also analyze the DNA of rodents and plants on the ISS, he said.

Image processing is another top use case for space-based data centers, Fernandez said. Cameras in orbit collect massive numbers of images from Earth, but there's a limit to how much can be downloaded.

Much of the images are of clouds, or empty seas. What people are actually interested in is what's changing in the images, Fernandez said. "Where is it flooded in Houston after the hurricane? Is this road still passable after the flood? You want to get information to the first responders as soon as possible."

The obvious use cases involve simple counting. How many cars are in the store parking lot? How much construction equipment is still on the site? How many container ships are in port?

This particular use case is still in the proof-of-concept stage, Fernandez said, where the recipients use the Spaceborne computer to do the processing in parallel with their existing systems. "I want to know, did I get the correct answer, and how much sooner did I get it to you than you got it the normal way?"

That's when the light bulbs go off, he said, and customers realize that they need this kind of processing on their next satellite.

Of course, putting a data center on a satellite has a different set of challenges than putting it in the ISS. The ISS internal environment is human-friendly. The temperature levels are regulated, and there's air, and human hands are around to fix anything that needs fixing.

The need for air to cool the servers has already been addressed. Both Spaceborne 1 and Spaceborne 2 were water cooled, Fernandez said.

"We're allowed to tap into the water cooling loop on the space station," he said.

To make all of it happen, HPE is working with a partner, OrbitsEdge.

"Our plan is to build a box that does radiation shielding and thermal management so whatever we put in that box can fly and work," said Rick Ward, founder and CTO at OrbitsEdge.

The OrbitsEdge satellite system is shaped roughly like an umbrella with solar panels on top to collect energy and provide shade for the computer below it. Then, at the very bottom, there are radiators that send excess heat directly into space.

In other words, power and cooling are free.

Ward didn't go into detail about how exactly the cooling system works. "It's not water, but something else that works as an integrated cooling system and radiation shield," he told Data Center Knowledge. "But I can't say anything beyond that."

The first demonstration satellite is expected to launch before the end of 2022.

Eventually, Ward said, he expects to see servers not just in satellites and the ISS and the new commercial space stations, but on the Lunar Gateway space station and on the moon itself, and also on Mars, and in orbit around Mars.

The earliest use case will be imaging satellites, he said. "That's our low-hanging fruit."

The goal here is to lower the barriers to entry for pace operations and make space computing similar to any other kind of edge computing, he said.

Adding computing power to satellites that are already scheduled to go up is a simple use case and will make those satellites more valuable.

As launch costs come down, special-purpose constellations of satellites that are just designed for data processing can be sent up to handle space-based workloads.

"I will say five years from now, there will exist an operational capability to process space data in space," Ward said.

At some point it will become possible to considerably expand the computing power available in space, either because the launch costs will drop dramatically, or because of space-based manufacturing of computer equipment.

At that point, space-based data centers can start handling workloads for Earth-based customers, he said.

Terrestrial data centers have high power costs and use valuable real estate, of which there's a limited supply. In space, there's no clouds to get in between the sun and the solar panels, and cooling is free.

Today's data centers have relatively low initial costs, the cost of the building and equipment, but the ongoing operating costs never stop, Ward said. "In space, you invert that. You have a high upfront cost, but your ongoing costs are significantly lower."

And space-based manufacturing allows new kinds of lithography, perfect crystals, and other advantages over terrestrial facilities.

Putting data centers in space makes good business sense, HPE's Fernandez said: "We're doing a lot of proofs of concept and experiments. The volume of those indicates to me that this is a market."

Another company that plans to start early trials of a space-based data center platform is NTT, which is working in partnership with Japan’s SKY Perfect JSAT Holdings.

The company plans for a number of satellites with computing and storage capabilities that form a single data center via optical links. The first satellites that make up this network are expected to launch by 2025.

The on-board computing will speed up data downloads from satellites, he said. Second, computing power can reduce the amount of information that needs to be transmitted by compressing it, or analyzing it in space.

"We expect more competitors to emerge next year with the same concept," Kawano said.

Last year the European Space Agency launched the PhiSat-1, the first satellite with AI processing on board. The PhiSat-1 uses Intel's Movidius Myriad 2 chip, an off-the-shelf technology not specifically designed for space travel.

"We also need more infrastructure in space," he added.

He agreed that it makes sense to add more computing powers to satellites, though he wouldn't call this an example of data centers in space.

"I would also expect a lot of computing on space stations," he said. "We'll see a server room, to support activities on the station. It won't really be a data center in the sense of serving others, and not the same size as you typically think of in a data center."