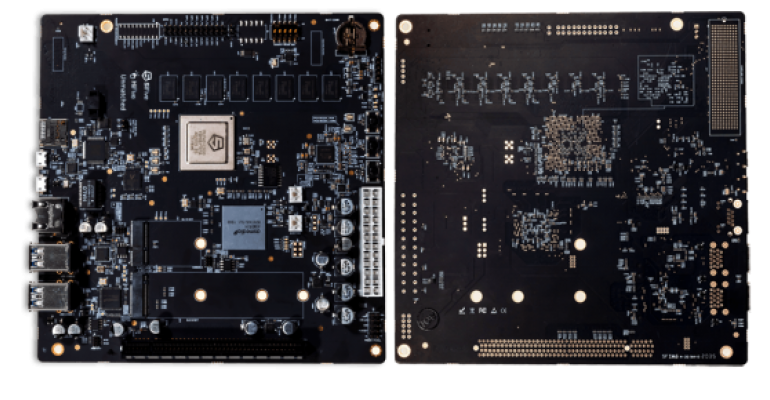 The open source RISC-V silicon specification flexes it's muscle with a new developers' board its maker, SiFive, is calling a PC.

In late October, two years after the fabless semiconductor startup SiFive put the RISC-V open source silicon specification on the map with its HiFive Unleashed developer board, the company announced a new board, called HiFive Unmatched.

While the first board -- which almost immediately caused numerous Linux distributions to port to RISC-V -- illustrated the architecture's promise, the new board shows that RISC-V appears poised to become a prime-time player as the CPU running machines, as opposed to being an accelerator playing CPU-helper.

SiFive isn't presenting this new offering as merely a developers' board. They're calling it a PC -- just without a case.

"I had to train myself to not say it's like a PC; it's actually a PC," SiFive's CTO, Yunsup Lee, told DCK. "You can actually go build your own PC, put it in a case. It's kind of cool."

"We had a lot of input from various folks," he added. "People had told us they want more performance, more I/O bandwidth in and out of the chip. Also, they wanted it more like an industry standard form factor, so that they can go build other things on top of it."

The new board is powered by SiFive's latest FU740 SoC, a five-core processor with four SiFive U74 64-bit application processor cores and one SiFive S7 core, with 8GB DDR4 memory and 32MB Quad SPI Flash storage. It comes with slots for PCIe and NVMe cards, as well as a slot for a WiFi/Bluetooth module. There's also plenty of connectivity, with four USB 3.2 Gen 1 Type A ports (including one charging port), and a MicroUSB console port.

As close as this is getting to prime time, realistically, RISC-V isn't quite ready to run servers in data centers, Lee said. "A lot of people and a lot of companies are working to put together additional things that need to be addressed for those type of verticals. I think those will be addressed soon -- in a year or two probably."

He's not alone in thinking that RISC-V is on a fast track to do the sort of heavy lifting that's traditionally been confined to processors from Intel, AMD, and lately also Arm. The Chinese hyperscaler Alibaba has been investing heavily in the architecture, likely as a hedge against possible US sanctions targeting Chinese companies. This summer, Alibaba introduced the RISC-V-based XT910, a 16-core design that maxes out at 2.5 GHz, which the company claims to be the most powerful RISC-V processor yet.

Alibaba has said that it plans for the RISC-V ISA to be the backbone of its cloud and edge computing infrastructure, although like Lee, the company has acknowledged that it's "not yet mature enough in terms of technology and ecosystem."

Lee told us that in his opinion, the ISA's first inroads to data centers as a bona fide CPU will be through the back door, powering custom machines built in-house to meet specific data center needs, before it enters the front door as boxed and ready-to-rack servers.

"I think that will happen very soon," he said, "and there's the possibility that will kind of build into something bigger as people start using RISC-V once the computers are in the data center."

"Obviously, there are some other forces which are accelerating the adoption of RISC-V," he added, citing Nvidia's pending Arm acquisition and fears of a clampdown by the US on some technology exports.

"It's a matter of when, not if," he said. "I think those type of external factors are definitely helping to accelerate the adoption of RISC-V into various markets, not just data center."