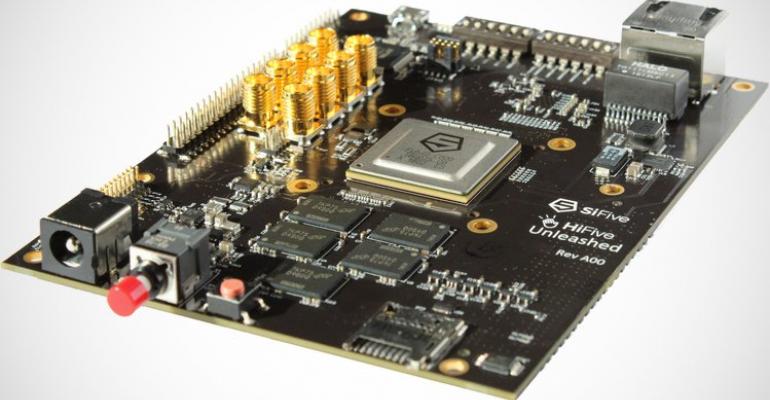 SiFive works to monetize open source CPU architecture by helping customers design and bring to market their own custom chips.

This week saw another indication that open source hardware is ready to seriously vie for a slice of the enterprise IT pie. On Monday the major company behind the open source RISC-V processor, SiFive, reported it had raised $50.6 million in a Series C funding round, bringing total funding to $64.1 million.

In addition, SiFive announced Western Digital had signed a multi-year license for its Freedom Platform, and that the company had pledged to produce a billion RISC-V cores.

A few days after the earnings announcement, Data Center Knowledge talked with Naveed Sherwani, who became SiFive's CEO in July. We asked about the deal with Western Digital.

"Western Digital had previously announced in November that they're shifting their entire product line, which is currently shipping about a billion cores a year," Sherwani said. "They expect that to become, in a few years, two billion cores a year. They have made a public commitment that in a couple of years Western Digital is going to shift its entire product line onto RISC-V."

This comes only a month or so after the company floated the idea of HiFive Unleashed, a $999 RISC-V-based single board computer (SBC), on a crowdfunding site and took advance sales of $143,700, selling out the limited run of the product.

The price tag might be steep compared to most SBCs, but it's not designed for end users to use for a DIY home entertainment system. It's a prototype for hardware manufacturers to use to take for a test drive as part of their R&D for product development. Actually, SiFive isn't in the business of manufacturing and selling chips and has no plans to compete directly with the likes of Intel or AMD. SiFive's purpose is to help companies design their own specialized chips, using the RISC-V architecture and the open source model.

"We do manufacture platform chips," he said. "These are sample chips that we do so people can start developing software, start testing our IP, start testing some other peripherals. They sell very well actually. We don't sell these chips commercially, meaning these chips are not to be used by an end consumer. We are not in the business of making end consumer chips"

In other words, the chips SiFive makes are basically samples, offering a way for companies to take the architecture for a test drive. They can run benchmarks and discover where the chip works well for an intended purposes, and where they fall short. They can then work with SiFive on design changes tailored specifically for their unique needs. The customer then can manufacture the chip according to those specifications.

"We consider these chips as templates," Sherwani explained. "What happens when you come to our design system is that you can bring any template into a design area and then modify the template. You can change various I/Os or do other things to that chip in the design area and then customize it the way you want it. Then our system will help you manufacture it."

The advantage to this system is that it greatly reduces the cost of bringing a custom chip to market when compared to the cost going the traditional route that has chip designers starting from scratch. This is great for established companies such as Western Digital looking to increase margins. It's even better for smaller companies, and even well funded startups, that otherwise would have to design products around off-the-shelf silicon.

"We are dramatically reducing the cost of prototypes," he said. "If the current system produces a prototype for $1 million, we are going to bring it down to $100,000. If it is $7.5 million, as in the case of certain technologies, we have already stated publicly that we want to bring it down to to $750,000. When you bring down the cost of the prototyping, it allows many more people to participate and try it out, and then get it to the customers and see if this product is going to be successful or not."

Indeed, said Sherwani, the open source-based process that SiFive has developed has made it possible for those with no experience to design chips and get them manufactured.

"Our vision is that in order to grow the silicon business, we have to get those people who do not have five PhDs and 20 years of experience," he said. "If you look at the kind of chips the world needs because of edge computing and a lot of other things, these are not very complicated chips.

According to Sherwani, RISC-V-based chips may eventually be found in servers and workstations, but that's at least several years down the road.