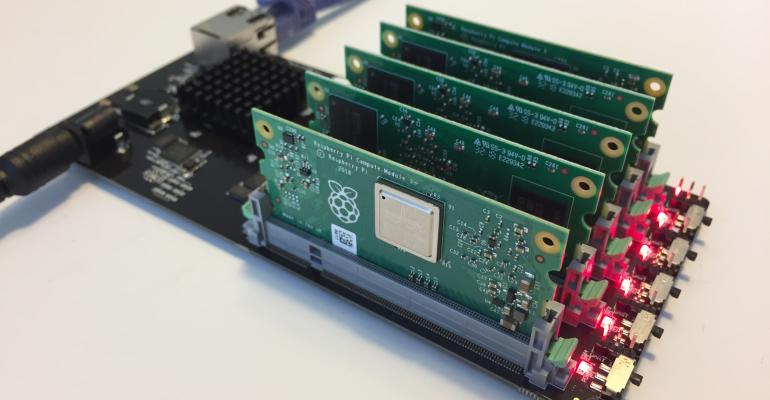 The pioneer of selling tiny bare-metal computers as a service expects more growth, fueled by the rise of Arm servers.

Tischler says he now has 40 to 50 customers, which he serves from a small rack of Raspberry Pis in his home, networked using Cisco routing, firewall, and switching, with a dedicated internet connection, "so it's not sharing with my kids streaming YouTube or something."

"It started here," Tischler told DCK, "but I now have underway an expansion to a data center with a partner of mine in Texas."

The new home of miniNodes will be a colocation data center in Austin, where Tischler and his new partner have already installed some equipment. The new location will mean both improved service and added capabilities to his customers, who will not only take advantage of a faster internet connection but will be able to access the networking capabilities the colo offers.

They had planned to be up and running at the new location by now, but the onslaught of Covid-19 slowed the move down. Now, they hope to have their official launch in March or April. In the meantime, he's putting his time to good use by doing some homegrown shade-tree R&D on how to best deploy Raspberry Pis in standard 19" racks. These Arm-powered single-board computers, or SBCs, tend to run hot, so he's working to determine the number of Pis he can safely fit into a 2U or 3U chassis and keep safe using conventional front-to-back air cooling.

Tischler said he is bullish about not just Raspberry Pi, but about Arm-based computing in general, pointing to the new Arm-based Apple laptops and Amazon Web Services' Arm-based Graviton processors.

"There's a couple of gotchas in the Raspberry Pi-specific hosting world," Tischler said. "They don't have a BMC [baseboard management controller]. They don't have those same management layers that big iron has, so I do have to provision each one individually with the SD card running Raspbian. There's no virtualization on it, so each unit is a single dedicated server."

Raspbian, now officially called Raspberry Pi OS, is the "official" Linux operating system for Raspberry Pi, the $35 credit card-sized SBC that was originally designed to teach computing to kids. The Pi is now heavily adopted by the maker crowd, for projects ranging from home automation to IoT, prompting Linux distributions other than Raspbian, including Ubuntu and Red Hat's Fedora, to offer native Raspberry Pi builds.

"By default we stick with Raspbian because it is what we know works out of the box," Tischler said. "If a customer wants to experiment with some others, by all means, we're not going to stop them. I mean, to flash an SD card is easy enough. But it's hands-off, so beware, there might be dragons."

That last note is important, because after flashing the SD card and making sure the device is up and running, miniNode's customers are pretty much on their own as far maintaining the server is concerned.

"There's no out of band management of the devices," he said. "After the node is provisioned, it's up to the customer to manage, maintain, and do everything necessary via SSH -- or they could install a desktop and VNC to it if they wanted."

Although the hosted Pi market isn't crowded, there are several companies occupying the space. The most well known would be UK-based Mythic Beasts, which launched its Raspberry Pi cloud in 2016 and today hosts the Raspberry Pi website. There's also the French hosting company Ikoula, which just last week announced that it had started a Raspberry Pi hosting service.

MiniNodes seems to be the oldest and smallest, however, having started in 2013, the year after the first Raspberry Pi was released.

"We focus on Raspberry Pis because people recognize the brand name and that is what sells, simply based on the logo and brand-name recognition," Tischler said. "I started with a more diverse set of products, like 96Boards devices, ODROID. Back in the very beginning, there were things called Cubieboards, and nowadays also I'm getting ready to deploy Nano because of customer demand."

He said the SBC-as-a-Service idea came to him when he worked in tech support for a major hosting company, which would sell customers VPS or dedicated servers because of the higher price, even when a customer really only needed a shared WordPress hosting plan.

"I kept seeing over and over bigger servers, more hardware, four-way Xeons with 16 cores, and these things would just sit there and burn electricity all day long, spinning the electric meter for overkill of what the customers were attempting to do," he said, adding that often, when looking into a support issue for a customer, he'd find that customer's CPU usage hadn't gone above 2 percent for months.

He said this led him to start looking into embedded devices and single-board computers.

"Raspberry Pi One had just been released and I just simply thought, it is crazy for these customers to be wasting money on the types of applications and workloads that they're running; I think that Arm microservers might have a future," he said.

"It has not evolved as rapidly or as quickly as I perhaps thought it would, but there's a small niche market for exactly that, which is light-weight bare-metal servers," he added.