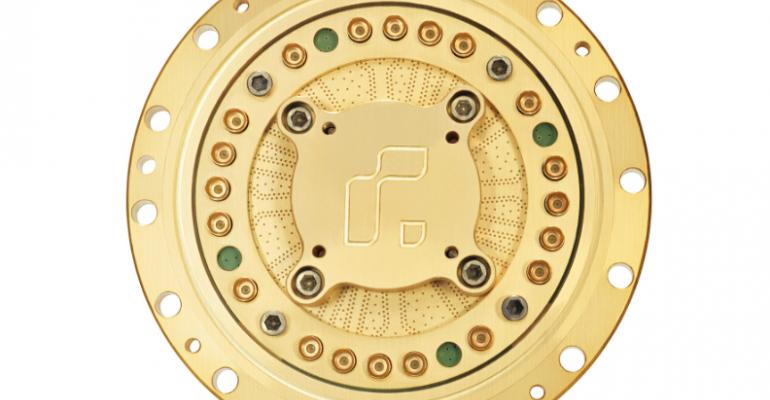 A Quantum Computing Startup Tries to Live Up to the Hype

No quantum computer has achieved "quantum advantage," so Rigetti Computing wants everyone to just lower their expectations.

Eric Newcomer (Bloomberg) -- Few corners of the tech industry are as tantalizing or complex as quantum computing. For years evangelists have promised machines capable of breaking the most impenetrable coded messages, unlocking the secret properties of the

But Rigetti Computing, one of the most prominent and well-funded startups in the field, would just like to lower everyone’s expectations.

Right now, Rigetti’s challenge for itself is this: Can it solve one, single problem with a quantum computer that a conventional machine cannot? Even if it just meant answering a question more quickly or cheaply than a supercomputer, the team of physicists and mathematicians at the startup’s Berkeley, California, office would be overjoyed.

So far, no such luck. Today, your laptop can solve pretty much everything one of the startup's quantum computers can do, just as quickly. The conundrum isn’t Rigetti’s alone. Neither IBM nor Google, which boast more powerful quantum computers, have said they’ve achieved “quantum advantage.” The ominous-sounding term refers to the theoretical moment when a quantum computer can do something more effectively than a traditional computer. It’s the industry's equivalent of a singularity-esque breakthrough moment but even more nerdy and obscure.

“Right now, what we’re focused on is the pursuit of quantum advantage,” said Chad Rigetti, the company’s eponymous founder. “Quantum computing doesn’t have the smoking gun, ‘holy shit, you’ve changed my business,’” he said. If it gets there, “the effect will not be subtle,” Rigetti said.

Rigetti, the man, has spent his entire adult life fixated on a still-unrealized computational theory. After spending seven years earning a Ph.D. in applied physics from Yale University in 2009, he toiled away for a brief time as a researcher in International Business Machines Corp.’s quantum computing group. He started Rigetti Computing in 2013 at the age of 34.

Rigetti & Co., the company's corporate name, has come a long way by startup standards. It employs former top researchers from NASA, Raytheon Co. and the universities of Berkeley, Stanford and his alma mater. The company built its own quantum computer, without access to the multibillion-dollar R&D budgets of the other companies investing in this effort. But it does have $119 million, $50 million of which came in a previously unreported venture capital deal late last year. Rigetti chose to keep the investment quiet until to avoid further heightening expectations. Bloomberg Beta, Bloomberg LP's venture investment arm, is an investor in Rigetti.

Now Rigetti, both the man and the company, thinks there may actually be something to brag about—despite the myriad issues that, as he is quick to point out, could still go wrong. The startup has designed a microchip for quantum computers that would have more than six times as many qubits—the basic measure of quantum computing horsepower—as Rigetti’s current machines. That would be more powerful than IBM's 50-qubit computer and more powerful than Google's 72-qubit machine. Rigetti is hoping to build a functioning computer with 128 qubits in the next 12 months. If successful, it could be the world’s most powerful quantum computer and just might have a chance of outpacing traditional supercomputers. “We’re making very fast, or exponential, progress on all these different fronts,” said Rigetti. “It’s all moving toward a supernova moment, and that is quantum advantage.”

Quantum computers are, however, far more prone to errors than binary machines. Instead of using electric signals to generate a series of zeros and ones like a conventional computer, quantum computers rely on the real-world, mechanical behavior of photons, which are packets of microwave energy. The machines require a complex, multi-layered refrigeration process that brings quantum chips to a temperature just above absolute zero. By eliminating certain particles and other potential interference, the remaining photons are used to solve computational problems. The true magic of this system is how photons can become entangled and produce different but related results. Scientists only partially understand why it works the way it does.

Generally, the more qubits a quantum algorithm involves, the more error prone it is, said James Whitfield, an assistant professor of physics at Dartmouth College. Whitfield says that IBM's quantum computer performs better than Rigetti's computer on his simulations of hydrogen molecules. But a 128-qubit version could change his calculus.

Even if Rigetti succeeds at leapfrogging Google and IBM—and there’s no guarantee it will—the company still doesn’t know what the machine would be good for. Researchers have their pet theories: more effective analysis of huge databases, accurate models of hydrogen atoms or advanced artificial intelligence. None of them are proven.

“My bet is the first demonstration of quantum advantage will come in machine learning,” Rigetti said. But some of his employees think modeling chemicals or organic molecules are just as likely first applications.

Fortunately for Rigetti, some companies are already willing to pay for the opportunity to play with the startup’s computers, though Rigetti isn't disclosing their names. Companies like Pivotal Software Inc., a San Francisco company whose tools are used by app developers, and OTI Lumionics Inc., a manufacturer of flexible computer displays in Toronto, are also running experiments on Rigetti's computers over the cloud. Rigetti declined to say how many customers it has or how much revenue the business generates.

Scott Genin, head of materials discovery at OTI Lumionics, uses a Rigetti computer to research new forms of organic light-emitting diodes for screens. Quantum computers aren’t the most efficient or cost-effective way to do these experiments, he said, but he wants to familiarize himself with the technology before it hits a possible inflection point. “I still simulate almost all the molecules that we design on a super computer cluster," Genin said. “I find some quantum computing experts, especially in theoretical fields have a lot of pessimism about the viability of quantum computers. I do not share their pessimism.”

Dressed in a tech-chic ensemble of green Allbirds and a button-up shirt, Andrew Bestwick, Rigetti’s director of engineering, shimmies into a bunny suit before entering the company's laboratory in Fremont, California. Inside, workers stare through microscopes, wait around for robots to wash off metal wafers. Back in Berkeley, workers tinker with refrigerators used to cool chips to a temperature approaching the lowest possible in the known universe.

A quantum chip doesn’t look like much with the naked eye. Through an optical microscope, though, you can see the quantum logic gate that makes everything possible. The team here is working on a process of stringing together 16-qubit chips to execute on the 128-qubit design. Essential to this is a new kind of quantum chip that communicates results in three dimensions instead of the current two, which allows Rigetti to fit the chips together like puzzle pieces and turn them into a single, more powerful computer. "What we’re working on next is something that can be scaled and tiled indefinitely," Bestwick said.

As a business, quantum computing remains very much in the R&D phase. This makes it something of a strange pick for venture capitalists. Andreessen Horowitz, the largest backer of Rigetti, is betting the scientific community is much closer to finding a practical use for quantum computers than even many researchers believe. “Quantum computing, until recently, has always felt like it’s the future, but the future 10 years from now,” said Vijay Pande, an Andreessen Horowitz partner who sits on Rigetti’s board. “When something is two years out and has the opportunity to so radically change the world, that is what venture investing is all about.” So much for lowering expectations.