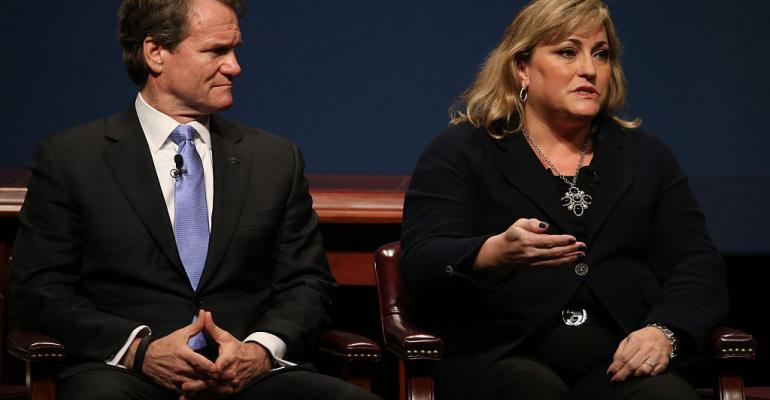 Justin Sullivan/Getty Images
Renee James (R), then Intel president, speaks during the White House Summit on Cybersecurity and Consumer Protection in 2015 in Stanford, California, as Bank of America chairman and CEO Brian Moynihan looks on.
Design>Hardware

Startup chipmaker Ampere has partnered with cloud service provider Packet to make its Arm-based processors available on bare-metal servers in the cloud, the companies announced Thursday.

The deal is an important win for Ampere, which is building 64-bit Arm server processors aimed at hyperscale cloud providers. The company, which launched in early 2018, released its first high-performance eMAG processor last fall.

The Packet partnership is an opportunity for Ampere to expand its business and give enterprises that have thought about using Arm processors a chance to try them out through a cloud-based consumption model, Matt Taylor, senior VP of worldwide sales and business development at Ampere, said.

“One of the big challenges of customers adopting Arm servers has been availability. We see this as a huge opportunity for our go-to-market strategy,” he told Data Center Knowledge.

The deal makes sense for both partners, who are startups attempting to grab market from much larger rivals. Ampere, led by CEO Renee James, a former Intel president, hopes to capture market share away from the Intel-dominated x86 server business.

Packet is differentiating itself from the likes of Amazon Web Services, Microsoft Azure, and Google Cloud Platform by offering x86 and Arm-based cloud instances on bare-metal cloud servers. The company has developed an extensive set of automation tools and has been a trailblazer in edge computing services at cell tower-connected sites, aimed at applications that require ultra-low latency communication between end devices and cloud compute infrastructure.

Ampere and Packet’s relatively small size enables them to collaborate and provide custom solutions to customers – something traditional silicon providers and cloud providers can’t do, Taylor said. Large chipmakers, such as Intel, do provide a degree of customization but only to their largest customers, such as the hyperscale cloud platforms.

Packet is pairing eMAG chips with 128GB of RAM, 480GB of SSD storage, and dual 10Gbps network ports. It’s available on demand for $1 an hour from Packet’s data centers, the companies said.

Ampere has touted eMAG, which features 3.3GHz speeds and up to 1TB of memory while using only 125 watts of power as competitive against both Intel’s and AMD’s x86 chips, both in terms of performance per dollar and performance per watt.

As for Packet, the partnership with Ampere strengthens its commitment to Arm-based, bare-metal cloud offerings. In 2016, Packet offered server instances that were powered by Cavium ThunderX chips, Smith said. In 2017, Packet partnered with the architecture’s creator Arm Holdings to provide developers access to Arm servers.

Overall, there is a lot of pent up demand for Arm servers, he added. “It has a great technical roadmap, strong use cases and stability in the ecosystem.”