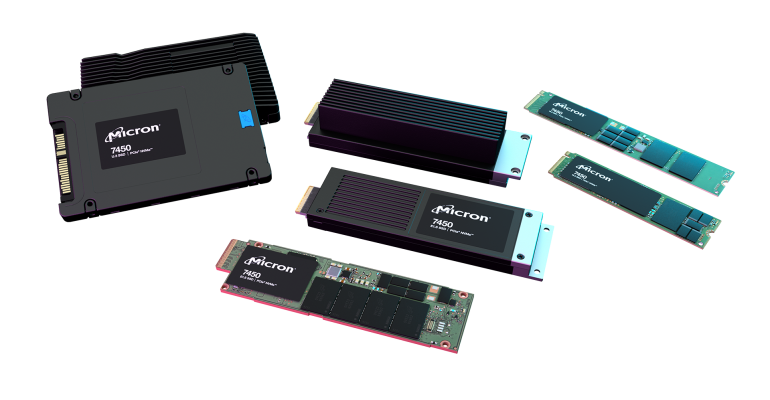 Flash memory giant Micron Technology has launched a range of data center SSDs based on the latest 176-layer NAND chips.

The 7450 series drives are available in capacities from 400GB to 15.36TB, multiple form factors, and three different interfaces – M.2, U.3, and the relatively new E1.S.

Related: Is There Really a Difference Between Enterprise and Consumer Solid State Drives?

There’s also a distinction in terms of drive endurance: the ‘Pro’ devices offer more storage, but support up to one drive write per day; the ‘Max’ drives sacrifice some of the capacity to extend support to three daily writes.

The new SSDs deliver up to 1 million random read IOPS across higher capacity drives, and promise latency under 2 milliseconds for 99.9999% of reads in mixed, random workloads.

“Six nines, as you hear in the industry, for common mixed, random workloads, that is a super critical to the hyperscalers of the world that require consistent latency,” Alvaro Toledo, VP and GM of data center storage at Micron, told Data Center Knowledge. “But also, for traditional data centers that are running databases. As you are running queries on your storage media, you're always bound by the slowest operation, right?”

Micron is one of the world’s largest flash manufacturers, and 176-layer 3D NAND, announced at the end of 2020, is its most advanced offering.

The first batch of products started shipping in 2021 to mobile device, PC, and laptop manufacturers; now, the time has come for data center hardware.

“This is a time when the industry needs it most. In the era of semiconductor shortages, the ability to get more more bits out of the wafer became super critical. And we're very proud to finally be able to do that,” Toledo said.

The 7450 series includes PCIe Gen4 SSDs for almost any application – and any server. Some of the new drives can serve as drop-in replacements for 2.5-inch spinning disk, some have been designed for maximum storage density per server; there are a few heatsink options to enable different approaches to cooling, and an M.2 device intended to serve as a boot drive, equipped with power-loss protection.

E 1.S, meanwhile, is an emerging flash form factor that’s a favorite among the hyperscalers, a descendant of the unusual ‘ruler’ design proposed by Intel back in 2018. “There are two hyperscalers today that use M.2, that have publicly stated they want to go to E 1.S,” Toledo told Data Center Knowledge.

The 7450 drives have been evaluated by the Open Compute Project (OCP), and the press release states they have met “most, but not all, requirements of the Open Compute Project NVMe Cloud SSD Specification 1.0a.” Nevertheless, the devices have received endorsement from Meta, the company that established, and remains one of the main driving forces behind the open source hardware initiative.

“Meta is enabling innovation through OCP with industry leaders to enable the next generation of cloud evolution,” said Ross Stenfort, hardware systems engineer at Meta. “The Micron 7450 unleashes this innovation with support for the OCP NVMe Cloud SSD Specification and E1.S with 8TB in a compact form factor. These specifications enable improved thermals, performance and simplified management at scale.”