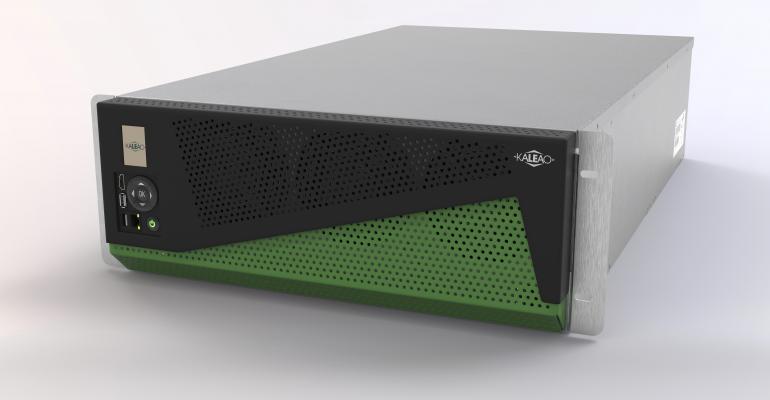 The UK-based startup, Kaleao, adds a repackaged version of its KMAX line to suit the physical needs of some enterprise users.

Kaleao has evidently been paying attention to the feedback they've been getting from potential customers. Just five months or so after they launched their first line of servers, KMAX, they've launched a new line that's meant to address concerns of the we'd-like-to-try-your-product-but-there's-a-problem crowd.

The difference between Kaleao's existing KMAX server line and the newly released KMAX-EP is on the outside, a redesign that allows its servers to physically fit the needs of enterprise machine rooms. The original KMAX line, designed for the high-density data center market, is still available, now under the name KMAX-HD.

The UK-based startup is trying to gain a toehold in the server market with servers that run on ARM silicon instead of x86 chips from Intel or AMD. While ARM servers are nothing new, the folks at Kaleo have been able to do so in a way that packs a whole lot of compute into a small package while sipping just 15 watts per server. "In a single 3U rack we're able to deliver 192 nodes of compute, where a node is eight cores of ARM processing," John Goodacre, Kaleao's co-founder and chief scientific officer told Data Center Knowledge. "Each node has it's own local disk for local cache and high aggregate bandwidth, plus we include 48 NVMe slots for SSD. We then give a non-blocked network access to that, so we have the ability to scale all the way up to nearly a terabit of networking into that chassis."

What does that mean in the real world? According to Goodacre, the company's benchmarks have demonstrated 10x better throughput than comparable servers, whether running Intel or ARM chips, and power use that's about 25 percent of standard servers.

"We're using mobile chips from Samsung," he said. "These are Cortex-A57 processors, the same processors that were chosen when AMD decided to look at using ARM in the server market. The processor is well up there in the terms of its credentials, it's just that typically people like Samsung that push them into mobile put peripherals around them that constrain them. The magic sauce of KMAX and Kaleao is how we can look inside that chip and just bring the memory and the processor capability out and express it as a server platform."

According to Goodacre, many of the company's innovations are enabled through the utilization of the mobile ecosystem.

"A good example of that is how we can indirectly attach up to half a terabyte of tightly coupled flash with every one of those processor instances," he said. "This is something that you just critically cannot do with the other architecture implimentation."

The company offers KMAX in a stand-alone Server Edition or in an Appliance Edition. The later is currently offered as the OnApp Hyperconverged Infrastructure Platform, for software defined infrastructure as a service with centralized system management for multi-tenant OS and Docker-based applications deployment, but additional appliance editions are in development.

Again, the new KMAX-EP line announced this week is designed to meet the physical needs of potential enterprise customers, a move brought about by feedback since KMAX's initial release in November. Goodacre explained that the original form factor works well for large data centers and the new bottom-of-the-tower centers being built at the edge, but that some enterprise needs are more rigid.

"In the enterprise we were more likely to meet machine rooms where the characteristics have compromises," he explained. "They have the full capabilities for air flow through raised floors and things like that. We were more likely to meet a cabinet that had multiple vendors in it, so the idea that a KMAX chassis just had to fit in -- it couldn't dictate aspects of the infrastructure of that machine room."

Otherwise, he said, there are no differences in the capabilities of the HD and EP lines.

"It's still the same SSD slots, the 960 gigabits of network bandwidth, but we've eased those environmental constraints, better suited now for the enterprise."

Goodacre said that most of the startup's traction has been at the edge, where the need for high performance with low power usage supersedes any reluctance to upset the apple cart with a new architectures.

KMAX-EP is scheduled to be generally available in the second half of 2018 but Kaleao said it's taking orders now.