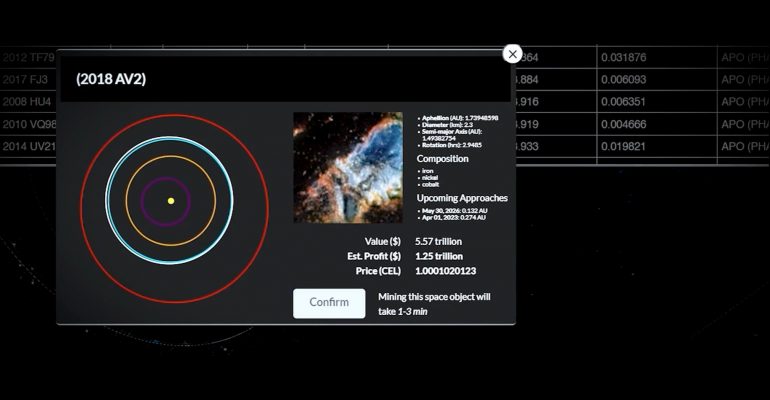 Despite its seemingly playful nature, the project has a very serious goal: to demonstrate a prototype of lunar-based cloud services.

The project, called Celestium, has been running in space since December 17th. It is a brainchild of artist Cecilie Waagner Falkenstrøm and her studio ARTificial Mind – which specializes in creating “humanized tech-art.”

The project’s generative adversarial network harnesses cosmic radiation data and combines it with space photography and conventional painting to create unique images, which are then minted as non-fungible tokens (NFTs) representing ownership of one of the 600,000 real asteroids that orbit our solar system.

Technology partners supporting the project include software giant Canonical, edge computing startup Lonestar, and Redwire Corporation, described in the press release as “a leader in space infrastructure for the next generation space economy.”

The hardware powering Celestium is located in NASA’s part of the ISS. The servers run Ubuntu Linux, with a custom kernel designed to operate on resource-constrained systems.

Despite its seemingly playful nature, the project has a very serious goal: to demonstrate data storage, onboard processing, and edge of network computing as a prototype of lunar-based cloud services.

The NFTs minted by Celestium won’t be sold for cash. In order to receive the tokens, individuals must contribute images to a collaborative artwork that will be sent into space in March 2022 as a contemporary portrayal of humanity. They can then exchange their ‘fungible tokens’ into NFTs that signify the ownership of a specific asteroid, and its accompanying AI-generated image.

But it’s not all fun and games for potential asteroid miners: along with the ownership of the stellar body, each NFT will be allocated a piece of space debris equivalent to the amount that would be produced in the asteroid’s harvesting, in order to raise awareness of the shared responsibility of the sustainable disposal of space rubbish.

Participants can collect the space tokens and AI-generated images until February 15th, 2022, by interacting with the artwork on the Celestium website.

Besides its tech partners, the project was supported by a number of unusual non-profits, like MindFuture Foundation that wants to add ‘Life with Artificials’ as the 18th UN sustainability development goal. The Angiogenesis Foundation wants to improve human ability to grow new blood vessels, while the Arch Mission Foundation wants to seed the solar system with detailed records of human civilization called Arch Libraries. Its first project was launched in 2018, when it sent a quartz disk containing Isaac Asimov’s Foundation Trilogy to orbit the sun, in the glove compartment of Elon Musk’s Tesla.