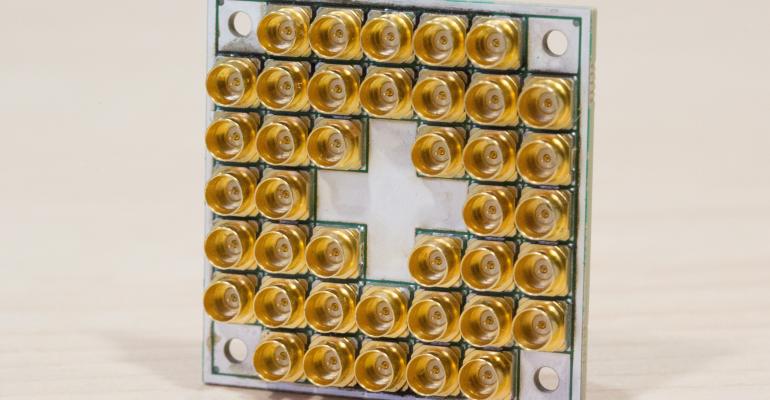 Ian King (Bloomberg) -- Intel Corp., the world’s largest semiconductor maker, said it delivered a test chip to a research partner that demonstrates the rapid progress being made in the field of quantum computing, which in theory would be able to perform tasks on huge amounts of data and do it faster than regular computers.

The Santa Clara, California-based company said it handed over a 17-qubit chip to QuTech, a Netherlands-based research firm. The new chip shows how important conventional semiconductor manufacturing techniques are to advancing the new field, Intel said in a posting on its website Tuesday.

Quantum has long been touted as the next frontier in computing, a technology that will usher in systems that are capable of simulating and understanding phenomena in the natural world instantly and providing the basis for systems that are unhackable. Those lofty claims haven’t come close to reality yet because of the difficulties of creating practical systems. Qubits -- analogous to bits represented on transistors in conventional computers - are much more fragile and require extreme conditions to operate as data storage. They typically require temperatures 250 times colder than deep space, according to Intel.

Microsoft Corp., IBM Corp. and some startups are also working to advance quantum computing. The technology has potential implications for producing new materials or creating new drugs, for example.

While Intel is offering the 17-qubit chip as a leap forward, it’s still got a way to go. The new part is the size of a half-dollar coin. In the same amount of real estate, a conventional microprocessor or memory chip used in a computer today could contain as many as ten billion transistors.

Intel is exploring several ways of developing quantum technology, including methods that might be able to lean on the traditional mass-manufacturing techniques used in semiconductor technology, it said.