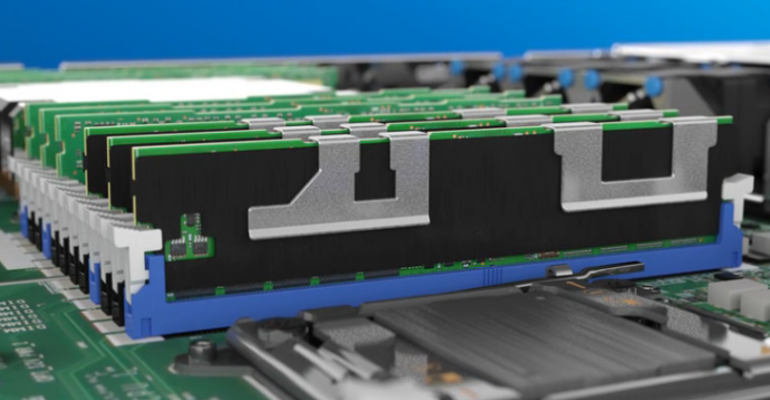 Intel Optane DC Persistent Memory is a new category of product that sits between DRAM and Solid State Drives.

Intel has introduced new memory technology called Intel Optane DC Persistent Memory that serves as a cheaper way to boost memory in data centers and speed the performance of databases and other data-intensive applications.

Intel executives say the new memory technology, which sits between DRAM on servers and solid state drives (SSDs), provides near DRAM performance at a lower cost than DRAM.

Intel Optane DC Persistent Memory, available now, doesn’t replace DRAM, but it augments it by allowing enterprises and cloud service providers to bring larger amounts of data into memory and closer to the CPU, which provides users with much faster access to the data they need, the company said.

“One of the biggest problems the industry has faced for decades is the problem where DRAM doesn’t support the capacity that application developers need. It doesn’t allow for persistence where the data continues to be stored when the power goes out, and NAND doesn’t provide the speed that the data-centric world we live in today demands,” said Navin Shenoy, executive vice president and general manager of Intel’s data center group during a keynote speech at last week’s Intel’s Data-Centric Innovation Day in San Francisco.

Intel Optane DC Persistent Memory, he said, “allows us to unlock performance (and) reduce those bottlenecks.”

Analysts say Optane DC Persistent Memory is an innovative new technology within the systems memory and storage hierarchy. While Intel is the first to market with this new memory technology, other competitors in the processor and storage market, such as AMD and Western Digital, are trying to address the same memory cost and performance issues in the data center, said Shane Rau, IDC’s research vice president of computing semiconductors.

Optane DC Persistent Memory works in two different modes. In “Memory Mode,” the product behaves like DRAM memory and acts like a cache for the most frequently accessed data, the company said. Data is volatile in Memory Mode, meaning if the server is shut down or if power goes out, the information in memory disappears. This mode is good for virtualized database deployments and Big Data analytics applications, the company said.

With the second mode, called “App Direct Mode,” the product behaves like storage. The data is persistent, meaning if the server is shut down, the data remains stored. According to Intel, applications have to be specifically tuned to take advantage of App Direct Mode. Applications that benefit from this mode include in-memory databases, in-memory analytics frameworks and ultrafast storage applications, the company said.

Patrick Moorhead, president of Moor Insights & Strategy, said the release of Intel Optane DC Persistent Memory is significant because it can reduce the cost of memory by 50 percent.

“If you are trying to save costs, you can put less DRAM in and more Optane,” he said.

“You can use Optane and have a larger memory footprint, and you can get much quicker results than if you were going to SSDs or a hard drive,” he said.

Moorhead said enterprises, cloud service providers and hardware makers, such as Dell EMC, Hewlett Packard Enterprise and Lenovo, have waited for something like Optane DC Persistent Memory for a long time.

“This is the reason you would buy a new system,” he said. “If you do SAP HANA, Vmware, or Oracle, this could be a major reason to upgrade.”