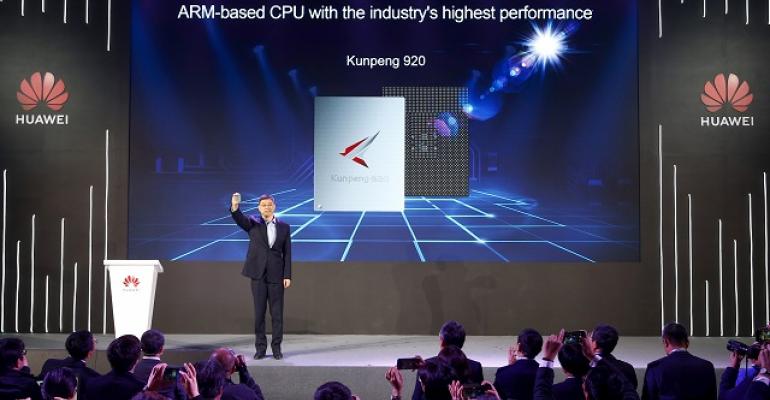 Huawei unveiled a new Arm-based processor and a server powered by the chip Monday • The processor, Kunpeng 920, is built using the 7-nanometer process • Huawei is showing no signs of tempering its ambitions even after a number of setbacks on the international stage • It shipped 918,000 server units in 2018, a 25 percent increase from the year earlier, according company presentation materials

(Bloomberg) -- Huawei Technologies Co. unveiled a new processor chip for servers as the Chinese telecommunications gear giant pushes ahead with expansion despite closer scrutiny from abroad.

The Kunpeng 920 is built using the cutting edge 7-nanometer process and uses the semiconductor architecture of Arm Holdings, Shenzhen-based Huawei said in a statement on Monday. The new chips would compete with the dominant x86 server architecture used by U.S. giants Intel Corp. and Advanced Micro Devices Inc.

Huawei is showing no signs of tempering its ambitions even after a number of setbacks on the international stage. Chief Financial Officer Meng Wanzhou was arrested last year on allegations of violating sanctions on Iran, the U.S. and its allies are questioning its security and some wireless customers have resisted using its technology. The company has long rejected suggestions its gear poses a risk.

The Kunpeng 920 performs 25 percent higher than the industry benchmark, operates at a better power efficiency than its peers and will boost the development of big data, the company said. The company also unveiled a new server based on the processors.

“Huawei has invested patiently and intensively in computing innovation to continuously make breakthroughs,” Chief Strategy Marketing Officer William Xu said in the statement. “Huawei and Intel will continue our long-term strategic partnerships and continue to innovate together.”

While best known for its networking gear and smartphones, Huawei also sells components and services for internet-connected devices. It’s Enterprise Business Group generated more than $10 billion in revenue in 2018, about a 10th of the company’s total.

The company shipped 918,000 server units in 2018, a 25 percent increase from the year earlier, according to presentation materials from Huawei.