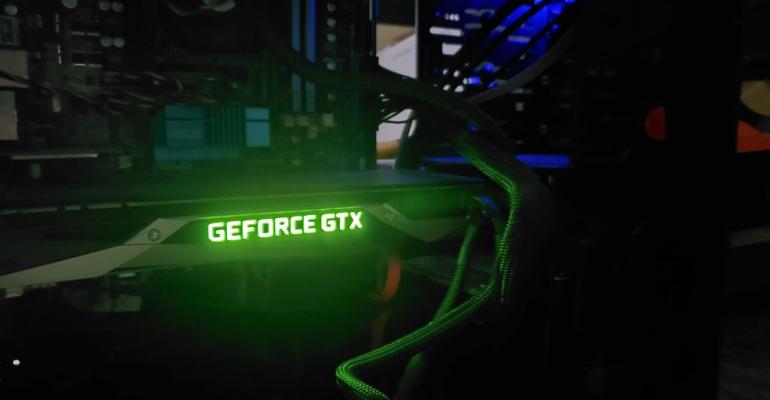 Subscribers, after a free promotional period, will initially pay $4.99 a month to stream games from Nvidia-owned data centers.

Ian King (Bloomberg) -- Nvidia Corp. powered on its GeForce NOW online computer gaming service, expanding the chipmaker’s connection to the growing video-gamer industry and putting it in competition with the some of the largest companies in technology.

The Santa Clara, California-based company, the biggest maker of chips used in personal computer graphics cards, is banking on the appeal of its technology among players to help attract customers away from rival gaming services run by Microsoft Corp., Alphabet Inc.’s Google, Sony Corp. and Apple Inc.

Subscribers, after a free promotional period, will initially pay $4.99 a month to stream games from Nvidia-owned data centers, the company announced Tuesday in a blog post on their website. That computing over the internet is powered by the chipmaker’s highest-end graphics cards, meaning that even those connecting from old laptops, TV set-top boxes, Chromebooks and mobile phones will have access to high-definition gaming, Nvidia said. Its service is open, meaning consumers won’t have to buy multiple copies of games they already own. Titles they’ve bought elsewhere will be made available to play on Nvidia’s service.

“Your old laptop never gamed like this before,” said Phil Eisler who heads the company’s GeForce NOW. “That Mac, which for years has seen fewer games published for it or lost compatibility, can now play the latest games.”

While Android smartphones, PCs and Apple Inc.’s Mac computers will be able to connect, there isn’t a version of GeForce NOW for the iOS operating system that runs iPhones and iPads. Eisler declined to comment on why the service won’t work on those devices and referred questions to Apple.

For Nvidia, the new service is part of an effort to make sure its technology stays important amid industry shifts. While PC gaming is still a huge business -- $29.6 billion in 2019 -- mobile is now twice as large at $64 billion, according to market analysis by Nielsen. Nvidia’s bet is that giving consumers access to the most graphics-intensive gaming over the internet will keep them interested in titles where its technology excels. It’s also aimed at proving the worth of Nvidia’s chips in data centers where it’s trying to build market share. That might be more valuable than the service as a business, at least initially.

Nvidia CEO Brushes Off Threat of Game Streaming Like Google’s

The chipmaker had 300,000 users in a capped beta test of its NOW service, with 1 million on the waiting list, Eisler said. Beta testers will continue to get access to a free tier. If the total wait list immediately turned into paying customers the service would provide Nvidia with about $60 million in annual sales. That compares with the company’s total revenue of about $11 billion.

Last September, Apple released its Arcade game service, which charges $4.99 for access to more than 100 exclusive games that subscribers can play on their Apple devices, including computers. Sony’s PlayStation NOW costs more for games related to its console. Microsoft has Game Pass, which offers a wide range of titles and lets Xbox users’ games be played on other devices and Google launched the streaming service Stadia in November.