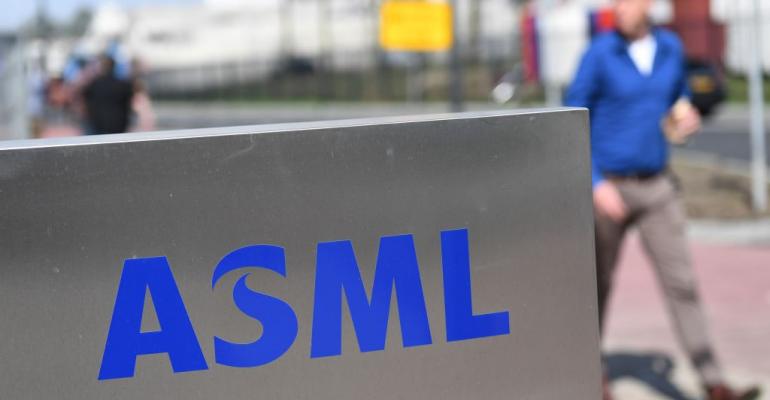 ASML Warns Chinese Rival May Be Infringing Its Trade Secrets

ASML has a monopoly on advanced extreme ultraviolet, or EUV, lithography systems that are indispensable to producing the most cutting-edge chips in the world.

(Bloomberg) -- ASML Holding NV has warned that an affiliate of a China company it previously accused of stealing its trade secrets has begun marketing products that could infringe on its intellectual property rights.

“Early in 2021, we became aware of reports that a company associated with XTAL Inc., against which ASML had obtained a damage award for trade secret misappropriation in 2019 in the USA, was actively marketing products in China that could potentially infringe on ASML’s IP rights,” the Dutch company said in its latest annual report released on Wednesday.

ASML has requested certain customers not to aid the associated firm Dongfang Jingyuan Electron Ltd. -- a corporation that has received Beijing’s stamp of approval under a program known as “little giants” -- and informed the Chinese authorities of its concerns. The company said it is “monitoring the situation closely and is ready to take legal action if appropriate.”

An inquiry sent to the official email listed on XTAL’s website could not be delivered, and calls to Dongfang Jingyuan’s headquarters in Beijing went unanswered.

ASML occupies a pivotal role in the global chip supply chain. It has a monopoly on advanced extreme ultraviolet, or EUV, lithography systems that are indispensable to producing the most cutting-edge chips in the world, and it also supplies deep ultraviolet lithography machines needed to make more mature semiconductors. The intellectual property allegedly stolen was related to software and not ASML’s core lithography technology, a spokesperson for the company said.

China is reliant on ASML’s technology as it tries to build a domestic chip ecosystem that will reduce its dependence on foreign imports. But that effort has been thwarted, with the U.S. government reportedly pressuring Dutch officials not to allow ASML to sell its EUV systems to China in 2019.

To this day, ASML still has not obtained an export license to ship its most advanced machines to China.

Chinese companies racing to build up their technological prowess have often been accused of stealing trade secrets from foreign firms. While Beijing has categorically denied such practices, IP theft has long been a sticking point in China’s relations with other countries, particularly with the U.S.

In 2019, a U.S. court awarded ASML $845 million in damages in a trade secrets theft lawsuit against XTAL, although the Dutch company denied it was a victim of Chinese espionage.

“The suggestion that we were somehow victim of a national conspiracy is wrong,” ASML Chief Executive Officer Peter Wennink said then.

In May 2021, Dongfang Jingyuan received the title of “little giant,” a designation for startups that have been selected under an ambitious government program aimed at fostering a tech industry that can compete with Silicon Valley.

The little giants label has become a valued measure of government endorsement, a signal for investors and employees that the companies are insulated from regulatory punishment. President Xi Jinping has given his personal blessing to the program.