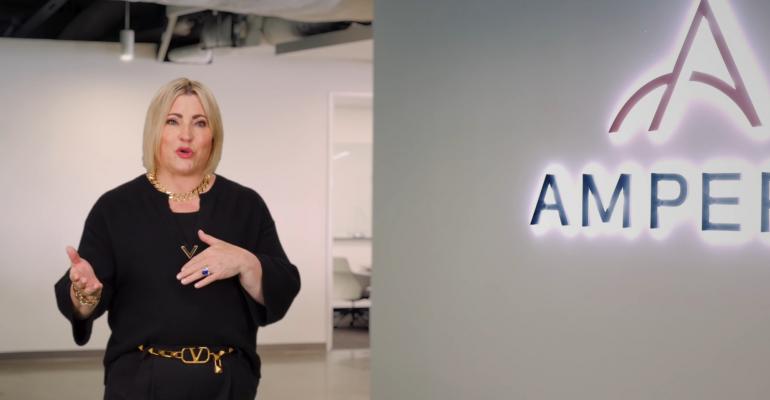 Ampere Computing, a startup that builds Arm-based server processors for cloud data centers and is led by former Intel president Renee James, has begun sampling a next-generation chip that features its own design, company executives said on Thursday.

Since its launch in 2018, the Santa Clara, Calif.-based company has made inroads in its quest to compete against Intel and AMD in the server chip market. Ampere’s first two products were built using cores licensed from Arm Ltd: the 80-core Ampere Altra and the 128-core Ampere Altra Max, both using seven-nanometer process technology.

One year ago, Ampere announced plans to design its own processor cores, so it can better tailor its products to hyperscalers’ needs. James, Ampere’s CEO, provided a small update on the new chip on Thursday. She said the company is sampling the new processor – called AmpereOne – with customers. She said the new chip supports DDR5 and PCI 5.0 but didn’t provide any additional technical specifications.

“We’re excited about the initial feedback and performance our customers are experiencing with our latest Ampere cloud-native processor,” she said Thursday in a video presentation posted on the company’s website.

Ampere continues to make strides in its effort to become an alternative to Intel and AMD in the lucrative server processor market. In its annual strategy and product roadmap update on Thursday, company executives recapped the progress they made in the past year and reiterated its argument that Ampere’s processors provide better performance and power efficiency than Intel and AMD’s x86 chips.

“A big thing is the momentum. A year ago, we talked about what the products looked like and that big things were on the horizon. Oracle was about to launch,” Wittich told DCK. “The big change this year is it did come. You’ve got tons of big clouds where anyone can go and get access. You want to spin up an instance and give Ampere a shot, it’s super easy because you can go virtually everywhere and grab an instance.”

Customers are currently evaluating the forthcoming AmpereOne processor. Ampere executives said the company will release more technical information later this year, including number of cores on the chip.

Wittich told DCK that AmpereOne will provide better performance, scalability and power efficiency than Ampere’s previous products. “We go one step further in terms of more performance that’s really predictable, really great scalability with a huge number of cores, so that everyone has a massive amount of capacity,” he said. “And increasing power efficiency.”

Kevin Krewell, principal analyst at Tirias Research, said it is significant that Ampere is sampling AmpereOne with customers, suggesting they are on track to deliver the product later this year.

Ampere’s decision to use their own custom Arm cores will allow the company to differentiate itself, he added.

"The fact that they felt they needed to build their own custom design could be due to a number of reasons,” Krewell said. “They feel they could do a better job than Arm in terms of building a better core and they have the talent to do so. Or they weren’t happy with the Arm roadmap and didn’t want to be beholden to whatever Arm produces.”

Overall, Ampere has made good progress in the market, but it is going to be challenged by hyperscalers who are big enough to build their own chips, like what AWS has done with its own custom Arm-based Graviton processors, Krewell said.