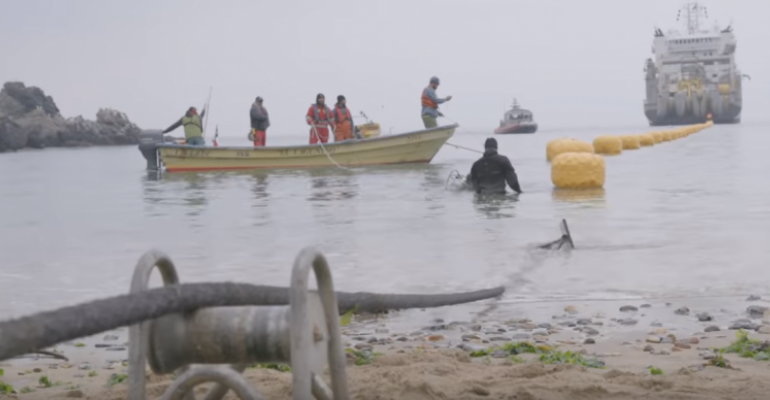 The main stretch of the cable, linking Los Angeles to Valparaíso, Chile, is complete, the company said.

The construction of Curie, Google’s own submarine cable that runs from Los Angeles to Valparaíso, Chile, is complete, the company said – at least construction of the main trunk.

Google also said that it will add a branch along the cable that will land in Panama. The company said it would be the first branch on the cable (implying that others may be added in the future) and boost overall connectivity and bandwidth to Central America while helping Google connect its global cloud platform to more networks in the region.

Global cloud platform operators investing in their own intercontinental connectivity infrastructure is a fairly recent phenomenon. The first fiber-optic submarine cable was laid in the late eighties and funded by an international telco consortium, which has been the predominant model for funding such projects ever since.

In 2010, however, in an industry-first, Google entered one such consortium as a member, contributing money to construction of the Unity system, which links US and Japan. Other hyperscale platforms – Microsoft, Facebook, and Amazon – also made their own submarine cable investments in recent years.

With Curie, Google again broke new ground, announcing early last year that it would fund the entire system on its own. It has since announced construction of two more wholly owned private submarine cables: Dunant, expected to come online in 2020 to shuttle data between the US and France; and Equiano, which will run between South Africa and Portugal when it lights up sometime next year, if all goes according to plan.

Curie sports four 18 Tbps fiber-optic pairs, providing 72 Tbps total bandwidth. It is the first subsea cable to land in Chile in 19 years, according to Google.

The largest cloud platforms have been cranking up infrastructure investment recently in emerging markets outside of North America and Western Europe, expecting higher rates of growth as companies in those parts of the world start catching up to their counterparts in established markets, where technical infrastructure outsourcing to cloud providers and otherwise is in full swing.

More about the Cure submarine cable in this Google video: