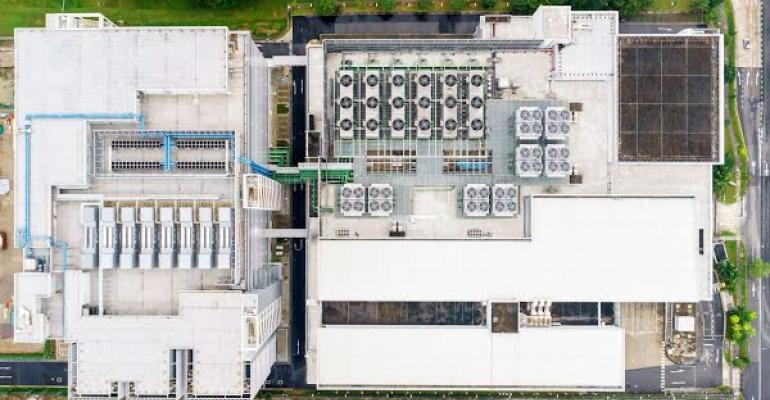 The company wants to power an upcoming cloud region by a massive solar plant combined with battery storage.

Apple may be leading the pack for solar use, powering both its data centers and its Cupertino offices with nearly 400MW of capacity in 2018 and adding another 200MW in 2019, but Google is going for the largest global deal so far for battery-backed solar in Nevada.

The company wants to use energy generated by a planned 350MW solar plant combined with up to 280MW of battery storage to power its upcoming $600 million data center in Henderson, a suburb just south of Las Vegas.

The Henderson data center is part of a broader push by the company to expand its cloud capacity in western US. Google broke ground in Henderson last July, planning to launch the data center this year to host a new Google Cloud availability region. A Salt Lake City cloud region is expected to come online this year as well, which would make for a total of four western US regions.

But its battery-backed solar power in Nevada is still in planning stages, awaiting approval by state regulators. Even if approved, it will not come online until the second half of 2023.

Related: Google’s Western US Data Center Capacity Is Swelling Up

“Google – in collaboration with Nevada Power Company – has submitted the necessary paperwork to secure approvals for our Long-Term Energy Supply Agreement for electric service to Google’s facility in Henderson, Nevada. We eagerly await the Public Utilities Commission’s decision and have taken steps to ensure they have all the necessary information needed to complete their review,” a Google spokesperson said in an email to Data Center Knowledge.

The company appears to be taking just part of the total generation capacity of the billion-dollar Gemini solar farm being built northeast of Las Vegas. The 7,100-acre farm will generate up to 690MW by 2023, with 380MW of lithium-ion battery storage.

Clean Cloud Is An Exercise in Site Selection

In 2017 Google switched from just offsetting emissions with renewable generation to committing to eventually powering operations with “clean, zero-carbon energy” around the clock. That meant investing in renewable energy production in all the regions where it operates rather than using wind, solar, or hydropower in some regions to compensate for emissions in others.

Taking this approach can also help clean up the overall local energy supply, and other cloud providers have taken it in select locations. Amazon, for example, was involved in North Carolina’s first wind power project, and Microsoft’s 2018 power purchase deal doubled solar capacity in Virginia.

Most of the time, however, tech giants source clean energy through “virtual” Power Purchase Agreements, funding construction of solar or wind projects that aren’t necessarily on the same grids as their data centers to “offset” fossil-fuel energy they consume elsewhere, Ramez Naam, co-chair for energy and the environment at Singularity University, told Data Center Knowledge.

While such a project may push fossil fuels off the local grid, it does nothing to reduce the greenhouse gas emissions associated directly with a data center powered by a different, dirtier grid.

Photovoltaic technology has improved a lot in terms of generation capacity since the early days of solar-powered data centers, but even with lithium-ion battery storage extending availability by four or five hours, it’s not enough.

“Battery-backed solar can help in powering data centers, but it’s not yet at a point where it can truly provide 24/7 power 365 days a year,” Naam explained.

Google will likely use battery power in Henderson during the evening spikes in power use on the grid, which typically last up to four hours after sunset, he speculated.

“That’s what we see in the broader solar industry now: solar farms being paired with up to four hours of storage,” Naam said. “Four hours is a bit of a magic number, because for roughly that long after the sun starts setting electricity use is still quite high: malls and shops are open; people are at home watching television, using appliances; air conditioning is still running.”

Wholesale energy prices during this period are high, which makes shifting the data center load to a battery charged during the day “quite attractive and increasingly economically viable.”

This strategy extends the period a data center can run on low-cost solar energy to well after the sun goes down. What that cost will be for Google is hard to tell now, since we don’t yet know how much the Gemini power will cost. In some of the sunniest parts of the US, solar energy can be as cheap as $0.02 per kilowatt-hour, Naam said. Storage about doubles the cost for the period it’s being used.

Those are subsidized prices, he warned, but subsidies make a modest difference. Unsubsidised, solar energy in those places would cost about $0.03, plus $0.025 for battery usage in post-sunset peak hours.

“Those costs continue to drop, such that solar-plus-storage is looking cheaper than coal, and may even be cheaper than natural-gas electricity in sunny parts of the world in the next several years,” Naam said.

Just One Piece of the Puzzle

In the longer term, fully powering data centers with renewables will require more than massive lithium-ion battery cabinets sitting next to solar panels.

The ability to store enough energy to power a facility for several hours is crucial, “but we also need an entirely different kind of energy storage that can store multiple days or weeks of power for situations like winter in northern Europe, when there’s very little sun, and when the wind can be abnormally low for days at a time,” Naam said.

“And finally, we need more long-distance power transmission to be built, so we can integrate the best solar sites (producing mostly in the summer) and the best wind sites (which produce more in the winter).”