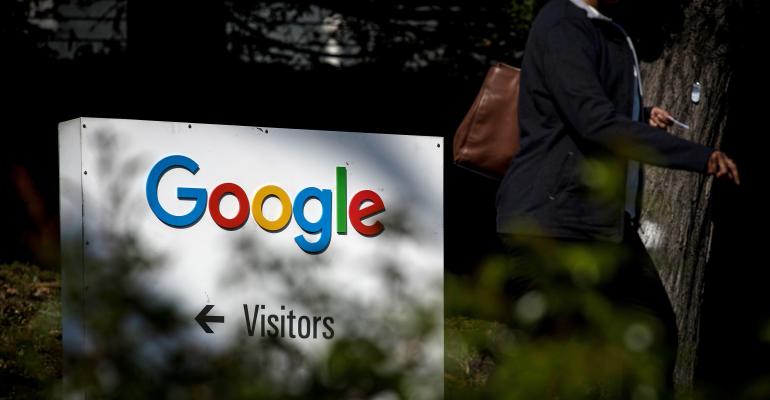 (Bloomberg) -- Alphabet Inc., Google’s parent company, illegally cut off contract workers’ access to a spreadsheet about pay transparency, a union alleged in a complaint to the National Labor Relations Board.

In a filing Thursday, the Alphabet Workers Union claimed that Alphabet and two of its staffing vendors violated federal labor law, which protects employees’ right to discuss their working conditions and organize. By withdrawing workers’ access to an online spreadsheet comparing pay rates, the companies “interfered with, restrained and coerced” the employees, the complaint claims.

The treatment of contract workers, who became the majority of Alphabet’s global workforce in 2018, has been a flashpoint for activism at the company and a major focus for the AWU, part of the Communications Workers of America. The AWU has signed up both Alphabet employees and subcontracted staff as members.

The latest complaint names Alphabet as a “joint employer” of the subcontracted staff, meaning it exercises enough control over working conditions to be legally liable for the employees’ treatment.

Alphabet didn’t immediately respond to a request for comment.

Subcontracted Alphabet staff have maintained a spreadsheet for several years where workers employed through various staffing agencies anywhere in the world can compare their pay -- an avenue to identify systemic inequities and to help individual staffers figure out if they’re being underpaid, according to the union.

Like a similar document for direct employees of Alphabet, the Google Sheet was hosted on the company’s own internal internet system. Google contract worker Laura Greene learned about the spreadsheet in July from the AWU and quickly shared the link with co-workers on her team, who had previously had some success securing raises after informally comparing their pay with each other, she said in an interview.

But the next day, all of them discovered their access to the spreadsheet had been cut off. Subcontracted staffers in other offices also lost the ability to view the document, which had received contributions from hundreds of workers, according to the union.

“We just want freedom of information -- I mean, it’s our money,” said Greene, an Accenture Plc employee who works on a team creating articles and graphics for Google’s customer help center. “We should be able to know that the sweat equity that we’re putting into this stuff is actually being compensated fairly.”

Though the AWU has no formal collective bargaining relationship with Alphabet, it has used tactics such as advocacy petitions and legal complaints to tackle workplace issues at the company. Last month, it asked the labor board to hold a unionization vote among a group of subcontracted YouTube Music workers and to deem Alphabet as a joint employer in that case. That designation -- if the workers voted to unionize -- would require the internet giant to negotiate with the labor group for the first time.

Last year, a complaint the AWU filed with the NLRB led to a settlement in which Google and one of its staffing agencies agreed not to silence workers who discuss their pay. Google didn’t admit wrongdoing in that case, which involved a data center in South Carolina where the union alleged that management didn’t allow pay discussions and suspended a worker because she wrote a pro-union Facebook post. The AWU argues that cutting contract workers off from the pay spreadsheet violates that settlement.

The NLRB has repeatedly shifted its position on employees’ rights to agitate online using their companies’ own email systems, expanding such protections under President Barack Obama and then restricting them under President Donald Trump. The agency’s current general counsel, President Joe Biden appointee and former CWA attorney Jennifer Abruzzo, has signaled that she wants to take up cases that could once again expand workers’ rights.

While Trump was president, Google was one of the companies that urged the NLRB to narrow the legal protections for workers organizing online.