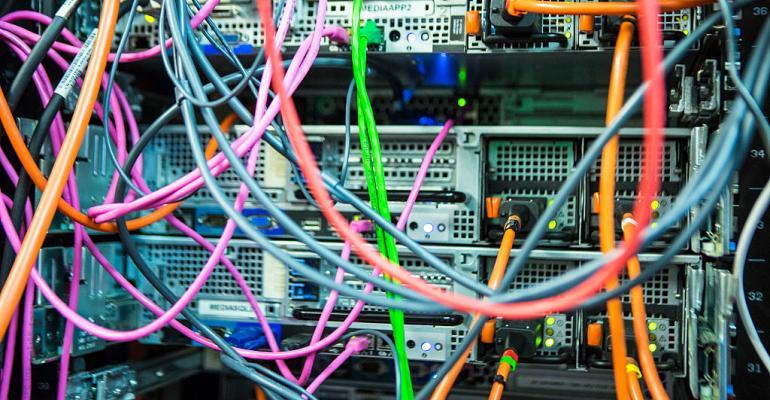 Ten stories that define the year in data centers

As we enter 2022, it’s a good time to look back at all the events that made the last year so… memorable, let’s go with that.

In order to do this as an online publication, we have analyzed the most popular stories published by Data Center Knowledge over the past 12 months. The list shows that data center professionals are partial to many of the subjects beloved by the tabloid press: tales of violence, spectacle, and scale.

We’ve got disasters, disappointments, dead languages, and even a failed bombing plot. And of course, several stories related to the technological complexity of remote work.

Here, they are presented in the order of popularity, as measured by those all-important page views.

The most read story of the year:

Surprising absolutely no one, the top story of 2021 chronicled the fire that destroyed a data center operated by OVH, the largest cloud provider of European origin.

The fire broke out in one room inside SBG2 just before 1am local time, according to the incident report. By around 4am, the facility was turned to ashes, and the nearby data centers remained under threat until the firefighters eventually brought the blaze under control.

This caused downtime for countless online services, and kept the entire campus offline for three days.

The hit on the company’s reputation was somewhat softened by the conduct of its charismatic founder and chairman Octave Klaba, who essentially live-Tweeted the disastrous event, displaying a degree of transparency that rarely accompanies data center outages.

These are the World’s Largest Data Center Colocation Providers

After years of consolidation, the 15 largest data center colocation providers in the world own about half of the market. The remaining half is extremely fragmented, which means more consolidation will follow.

As mergers and acquisitions continue – and accelerate, fueled by an unprecedented amount of investor appetite – the ranking of the largest players in the space may eventually change.

As of today, the world’s largest data center colocation provider by market share is Equinix, accounting for about 11 percent of the $54 billion market, according to the latest global leaderboard by Structure Research, an analyst firm that tracks the internet infrastructure services market.

#3: The one explained by the pandemic

What Is Zscaler and How Does It Secure Enterprise Networks?

Zscaler is one of the preeminent examples of the emerging SASE sector. SASE, pronounced "sassy," stands for Secure Access Service Edge. It combines software-defined wide-area networking (SD-WAN) with access control and security, all bundled as a cloud service.

In effect, it offers a secure private Internet that interconnects a company's users, data centers, cloud infrastructure, and SaaS and other third-party services.

"There was one day last year when most of the world started to go into lockdown and we saw a 1,300 percent increase – in one business day – in our peak load," said Patrick Foxhoven, Zscaler's CIO and executive VP for emerging technologies. "And that's starting from a base of millions of users. We lovingly refer to this period as March madness."

#4: The one about necromancy

No, COBOL Is Not a Dead Language

In April 2020, when New Jersey Governor Phil Murphy announced that the state desperately needed volunteers with COBOL skills, the announcement raised a lot of eyebrows. The state's unemployment insurance system got overwhelmed by a surge of COVID-19-related unemployment claims, creating a backlog in processing cases. It ran 40-year-old COBOL applications, and there weren't enough people familiar with what most assumed was an antiquated programming language.

The fact that the system was running apps written in COBOL eclipsed the late unemployment payments in news accounts. IT workers saw it as yet another sign of America's deteriorating infrastructure. To people unfamiliar with the ins and outs of mainframe computing, COBOL was something from the age of the dinosaurs.

But COBOL is far from being dead, and not just because it runs some old state-government system. If not today, chances are you've used a COBOL-powered system at least in the last few days.

#5: The one where everybody hates RedHat

Red Hat didn't make any friends when it decided to stop supporting the popular free replacement for RHEL, but new options are already in the works.

At least two projects to fork CentOS are in progress, each promising drop-in replacements to be up, running, and stable in plenty of time for data centers to make the switch.

This is important: while the CentOS user base isn't primarily composed of tech enthusiasts, it includes the likes of Disney, Toyota, Rackspace, and Verizon. It's also the default operating system for many hosting companies, both for shared hosting and for virtual private servers. Enterprises like it because it offers the rock-solid stability of RHEL without the cost of support subscriptions.

#6: The one that sounded scary at the time

Microsoft Exchange Hack Could Be Worse Than SolarWinds

Unlike the SolarWinds breach of 2020, this Microsoft Exchange vulnerability could be exploited in an automated way.

If a data center had an Exchange server accessible via the public Internet, it was best to assume that it had been compromised, said Mark Goodwin, managing senior analyst at security consulting firm Bishop Fox.

And, unlike the SolarWinds breach, which was primarily exploited by a single state-sponsored group, reportedly from Russia, the Microsoft Exchange vulnerability was open to everybody. Originally associated with a Chinese state-sponsored group called Hafnium, at last count half a dozen different outfits were later seen actively attacking organizations with vulnerable servers.

#7: The one about endless online meetings

Google Teams Up With Cisco WebEx to Make Videoconferences Easier

With corporate workforces reliant on virtual meetings – and the delta variant delaying a return to the office – videoconferencing rivals Google Meet and Cisco WebEx partnered up to make the process of logging in a little easier.

Google agreed to support interoperability with Cisco hardware devices. That meant customers were able to log into a Google meeting on a Cisco device, and vice versa.

The agreement suggested the start of a more cooperative era in the cutthroat conferencing market, where software providers spent the previous 18 months trying to undercut rivals in the hunt for more corporate users.

#8: The one about bombs and conspiracies

Following the arrest of a man who was allegedly plotting to blow up an AWS data center, operators of computing facilities – and other digital infrastructure – were facing an important question. Was this a beginning of a trend, which would require a reaction on their part, or an isolated freak incident, in which case everybody could carry on as usual?

DCK talked to several experts who agreed that the latter wasn’t an option. At a minimum, operators should review their security posture, emergency action plans, and disaster recovery plans. Beyond those basics, the foiled bombing plot could be used as impetus for investing in things like vehicle access control, or monitoring corners of the Internet where the conspiracy-minded congregate.

#9: The one with good advice

Give OVH a Break. And Use the Data Center Fire as a Teachable Moment

It would seem that OVH’s transparency had them off to a good start, but it could take months, or even years of effort to get to the bottom of what caused this disaster, what were the contributing factors to the extensive damage, and what to do to prevent a repeat in another facility.

Clients, investors, insurers, and the data center industry that takes pride in high availability and reliability of data center facilities will all want to know the details. An event like this cannot be whitewashed in any way. It is far too public, and questions will linger for years.

#10: The one about the aftermath

Following the fire, OVH teams from other company offices and data centers, as well as HR staff, arrived to support and reinforce the team at the Strasbourg campus, OVH said in a status update. Top priorities locally were to secure and clean up the site and reconnect electricity and network for the three data centers that survived the fire.

All maintenance operations in OVH data centers were temporarily "frozen," presumably to free up resources to help in Strasbourg and to avoid any unexpected problems in other data centers, which often arise during maintenance.

An even higher priority for the company was to set up replacement servers for the affected customers in other OVH data centers. The company said it had enough new servers stocked at its Roubaix and Gravelines sites for most of those customers.

Internal volunteers had also reinforced staff at the company’s French server manufacturing site, in Croix. Assembly lines at the factory had been reorganized and tripled production capacity to 3,000- 4,000 servers per week.