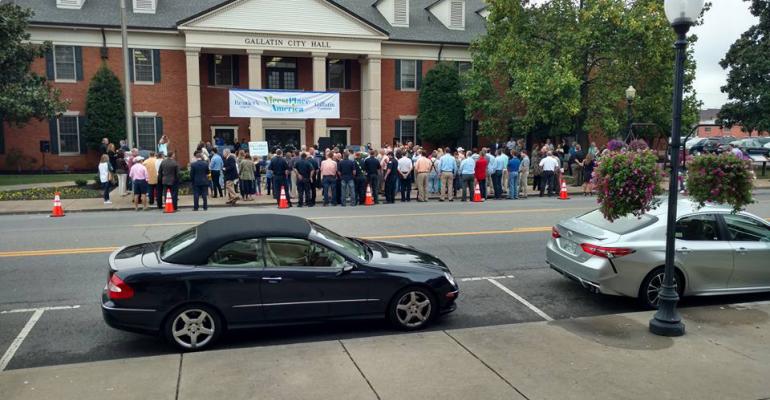 How a Small Town Outside Nashville Lured a Hyperscale Data Center

Gallatin officials expect the future facility, likely by Facebook, to have a transformative effect on the local economy.

A tech giant whose name is yet to be revealed is expected to announce construction of a hyperscale data center in Gallatin, Tennessee, a town of 40,000 located 30 miles northeast of Nashville. The giant behind “Project Woolhawk” is widely expected to be Facebook.

City economic development officials, who have been laying the groundwork for attracting a major data center project for four years, expect the future computing facility to become the county’s largest source of revenue and create some of the highest paying jobs in the area.

“We didn’t need any more $15-an-hour jobs,” James Fenton, executive director of the Gallatin Economic Development Agency, told DCK. “We just looked out there and decided this was the direction we wanted to go.”

He wouldn’t confirm the identity of the developer – “That’s unconfirmed speculation at this point in time; it’s still operating under the name of Project Woolhawk” – but many expect it to be Facebook, due to design similarities, as well as legal documents tying the project to the social media giant.

There’s also a second data center project underway in Gallatin, by a developer called Archer Datacenters, which hopes to lease the facility out on a wholesale basis.

“Most data centers in Nashville are in Brentwood and Franklin, which is already very developed,” David Bartholomai, Archer’s chief operating officer, told us. “Finding reasonably priced land to develop a greenfield site is more expensive [in that area]. That led us to Gallatin, where TVA (the utility serving a vast area outside the town) had built a 50MW substation adjacent to our site. We can offer 20MW of power on day one and can scale beyond that. Having transmission built to the area made that attractive to us.”

Archer was also drawn to the area by a large solar energy generation plant TVA is building in Middle Tennessee, he said. Today, Gallatin is powered by the city’s own coal power plant. In selecting a site for what would be its first data center, Archer looked at areas where hyperscale facilities were going up, because hyperscalers typically push for and invest in new renewable generation close to their computing facilities.

“We looked at markets where the bigger guys were already developing, because they were creating huge renewable assets,” and also considered locations such as Omaha, Albuquerque, and Columbus, Bartholomai said.

Official unveiling of Project Woolhawk is expected early next month, with the first building due in about two years and a second about 18 months after that.

“We’ve finally got everything entitled,” Fenton, the economic development official said about the hyperscale data center project. “They’ve annexed 800 acres. It’s been rezoned. The development agreements are in place. The utility agreements are in place. They’ve already shipped us $9.8 million to start water and sewer improvements and road projects. We are expecting some kind of announcement in early August.”

The steps the city took in 2017 to attract data centers are now starting to bear fruit.

Gallatin owns its water, sewer, gas, and electric utilities, running a coal-fired plant. It has connections to the Tennessee Valley Authority infrastructure for more power. “We have six million gallons a day excess capacity in water and sewer, which was necessary to attract hyperscale users,” Fenton said. “We have a 50MW substation sitting there with no load on it.”

As incentives, the company behind Woolhawk is receiving a partial abatement on personal and real property taxes and in return paying for water and sewer upgrades, for a new road and other transportation improvements, and $2.4 million in permitting and inspection fees, Fenton said. “It is revenue-positive. It will become the largest revenue source in the county.”

The company will pay the city $1 million a year for its first building, $750,000 for the next one, and continually smaller amounts for buildings after that. “If it builds out the way they’re hoping, it will be $4.5 million in taxes,” Fenton said. “That’s $85 million of revenue over the next 20 years.”

The hyperscaler is also eligible for some tax breaks at the state level but according to him isn’t planning to take advantage of them. “In other cases, the state might pay for the road, water, sewer,” he said. “I think they’ve learned that it just puts a bad taste in people’s mouths. They have the ability to pay for that.”

While Gallatin’s power plant is coal-fired, the company is working with TVA on renewable energy, such as purchasing offsets, Fenton said. “There are some wanting to put up large solar fields, but at this point in time, they haven’t been willing to pay enough to make it worthwhile,” he said. “We don’t have thousands of acres lying fallow.”

The company has purchased 800 acres of land, currently used agriculturally, so it won’t be near any other projects. “The site plan shows they’re going to have cattle fences and cattle grazing,” Fenton said. “I don’t know if they’ll lease some of it.”

The construction phase is likely to bring 1,400 workers to the site for six years to build at least two buildings, Fenton said. After that, the data center is expected to create 40 full-time jobs and jobs for 100 or so subcontractors who would be in and out daily, he said. Those jobs would start at $80,000 – in an area where the median household income is $54,000, Fenton said.

To make sure those jobs go to locals, there’s a collaboration between the Nashville State Technical community college and Volunteer State community college on what’s called the Apprenti program. “It was developed for Microsoft and Amazon when they couldn’t find workers,” Fenton said. “Anyone who wants to garner the skillset, it’s in place right now.”

The program is currently free for students – though the students would have to be able to pay their living expenses while taking the 40-hour-per-week, 18-week-long program – and community college in Tennessee is free to all students through the Tennessee Promise program. “It’s very satisfying to see this three-to-four-year plan come to fruition,” Fenton said.

Tax Breaks for a Chance to Get on the Map

Archer started construction in Gallatin in November and expects to complete the project this September, Bartholomai said. The future 82,000-square foot building will house about 50,000 square feet of white floor space.

In terms of jobs, there are about 100 workers building the facility, which will provide five to 10 permanent jobs once the data center is launched, plus a number of support positions, for which the company hopes to hire locally, Bartholomai said.

Archer is partnering with Michigan-based Salute Mission Critical, a national company that subcontracts operations for data center facilities and hires veterans. Archer has already hired its first staffer, a regional operations director, for facility management, planning, and conversations with potential customers. The advantage of working with a company like Salute is that it allows Archer to quickly ramp up staff if needed for a project, Bartholomai said.

Tax incentives weren’t a major consideration for Archer. They are more of a factor for larger companies, such as the hyperscaler behind Woolhawk. “Some of the other states we were looking at had better tax environments for smaller companies like ourselves, but the market outweighs taxes,” he said. “We also looked at Nashville as having the best market for customers that would want to use our data centers.”

The biggest tax factor for hyperscale data centers is personal property tax abatement, which can cut as much as 10 percent off a project’s entire cost, he said. “It’s key. It’s the basis for even qualifying states when bigger companies are looking. With the scale that some of the hyperscalers are, they would only locate in states with that type of abatement.”

Bartholomai expects Project Woolhawk to attract other companies to the area – such as subcontractors, since there probably isn’t enough capacity another data center of that scale, Fenton said. “Honestly, when you have a marquee name like that, you’re able to attract other companies.” He said he expected the data center to have a similar effect to that of the Beretta Holding’s decision to build a firearms R&D and manufacturing division in Gallatin, which opened in 2016.  “1.75 million Tweets went out,” he said, adding that every site consultant he’s talked to since then has mentioned it. “That puts it on the radar. The same thing will happen with this.”