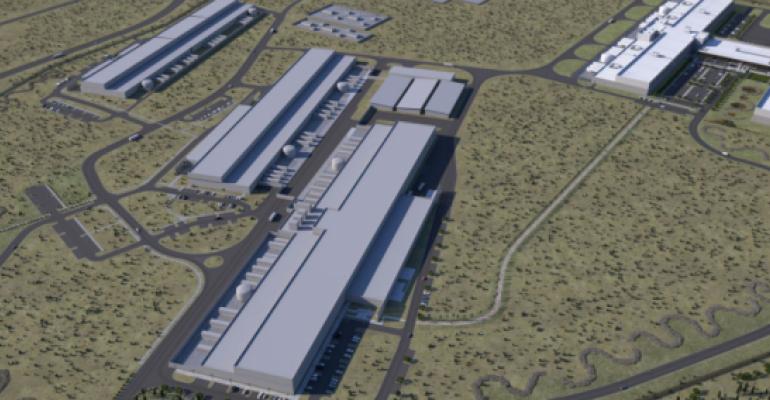 Facebook
Rendering of the Facebook data center campus in Prineville, Oregon. The two new data centers the company is building here are the white H-shaped complex in the top right corner.
Companies>Meta (Facebook)

Put 2017 down as the year Facebook took data center expansion to a whole new level.

This year, the company whose social network now serves more than 2 billion users monthly announced more new data center locations than in any prior year, in addition to major capacity expansion projects in four existing locations.

One of those expansion projects was announced today. Facebook said it will build two more massive data centers in Prineville, Oregon, home to the first, customized data center the company designed and built on its own.

In addition to growth of its already massive user base, Facebook’s hunger for new data center capacity is fueled by the outsize role video now plays on its platform, as well as growing new types of media, such as live video, 360-degree photos and video, and virtual and augmented reality.

Facebook is one of several companies in the world considered to be hyper-scale data center operators. Also including Amazon, Alphabet’s Google, Microsoft, Alibaba, Tencent, and Baidu, this group operates the world’s largest cloud platforms, designed from the ground up to serve customers at global scale.

Built to support a limited number of applications in the most optimal way possible, these platforms are designed differently from the ones used by more traditional enterprises, such as banks or insurance companies, whose data center environments are much more heterogeneous, supporting many types of applications, of varying age and with varying performance requirements.

Facebook plans to break ground on the first of the two new facilities in Prineville this month – almost exactly eight years since it first broke ground in the high desert town, KC Timmons, who oversees the company’s data center operations in the West Region, wrote in a blog post.

The two buildings’ total footprint will be 900,000 square feet, plus a 70,000-square foot administrative building that will connect them. The project will cost “hundreds of millions of dollars,” Timmons wrote.

To date, Facebook has invested more than $1 billion to build out its Prineville campus, which currently consists of two full-fledged data centers and a cold storage facility, which is essentially a stripped down version of a data center, designed to house storage systems that hold rarely accessed user data. The three existing buildings total 1.25 million square feet.

The new Facebook data center locations announced this year are Odense, Denmark; Papillion, Nebraska; New Albany, Ohio; and Henrico, Virginia. They will bring the total number of locations where Facebook user data is stored and processed to 11.

Also this year, the company started serving traffic out if its new data center in Fort Worth, Texas.

Facebook does not usually disclose additional locations, where it leases data center space from commercial service providers. Those include facilities in Ashburn, Virginia; and Singapore, according to DCK’s sources.