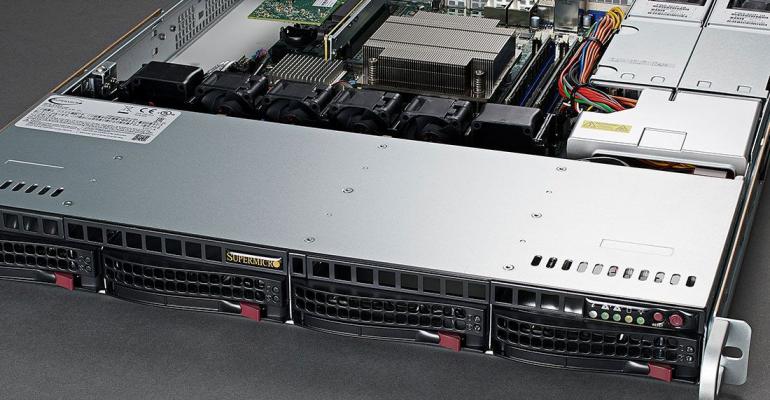 Equinix
An Equinix Metal as a service x86 server.
Companies>Equinix

Equinix in October went live with Equinix Metal, a fully automated and interconnected bare metal-as-a-service offering at its data centers in Silicon Valley, Ashburn, New York Metro, and Amsterdam. Since then, it's added Dallas and Singapore to the mix, with Frankfurt expected to be up and running in the near future.

This came almost exactly seven months after the firm announced it had finalized its $335 million purchase of the New York City-based bare metal startup Packet.

Equinix Metal expands the colocation giant's product portfolio. It also seems to put it in competition with cloud providers, which represent a sizable slice of its customer base.

"I don't think so," Zac Smith, Packet's founder and former CEO, told DCK when we asked about Equinix competing with its customers. "Do we offer a similar capability in terms of being able to take a computer and turn it on? I think so. Do we compete for the value proposition of a public cloud? I do not."

Smith has been managing director of bare metal at Equinix since March after nearly six years leading Packet. According to him, comparing Equinix's offering with what cloud providers are offering in the bare metal arena is something of an apples-to-oranges comparison.

"Most people are choosing and working with public clouds for their rich ecosystem of software applications," he said. "I don't think anybody goes to a public cloud specifically to buy CPU cycles; they go there so that they can have access to the rich amount of integrated applications like Redshift or like data pipelining."

Actually, the ability to fire up a bare metal instance to purchase some CPU cycles is not all that Equnix Metal offers, since their bare metal servers will be hooked-up to Cloud Exchange Fabric, which has now been rebranded as Equinix Fabric.

"We've brought our Equinix Fabric capability all the way down to the bare metal compute layer, so within about 15 minutes from signing up on Equinix Metal you're going to be able to activate our fabric capability and interconnect with our thousands of fabric participants," Smith said.

This means customers will be able to seamlessly deploy hybrid multi-cloud architectures and quickly access thousands of networks, enterprises, and clouds on Platform Equinix.

The road map for now is to expand the bare metal availability into 14 regions by the end of the year. However, Smith said that in the long term plans are for bare metal as a service to be universally available at Equinix's colocation data centers.

"Over time, we hope that we can put the Equinix Metal capabilities in every single one of our regions," he said. "At this point we're focusing on how to give that capability to our 14 densest interconnection markets, and then expand that into other places where our customers have expressed interest."

Although some users will want to incorporate the service as a permanent part of their infrastructure, Smith said perhaps a bigger use case will be customers who want to try something on for size before committing racks of equipment to a colocation region. For example, a company that's seeing an uptick in business from Asia might want to see if it helps to have compute sitting in a data center in, say, Singapore or Tokyo to improve their customers' experience.

"We can do that virtually for you, and then if you choose that you want to do it in colocation and own your own infrastructure, that's great," he said.

Another use would be for burst compute capacity -- to handle the extra compute a retailer might temporarily need during the holiday shopping season or to help an accounting company at tax time.

Cloud bursting and a quick way to expand geographic reach also happen to be two of the primary use cases for public cloud platforms.

"We've seen a huge amount of that related to COVID, as people's workload just changed dramatically and showed up in different places for them," he said. "That's why we focused on not only bringing the programmatic access to metal, but making sure that it was tied deeply into our fabric. That way, as long as you're a colocation customer and you're on fabric, you can programmatically turn up access to low-latency bare metal in that same region and expand your footprint for one hour or for one year.

"It's incremental to us. We're offering hourly pricing or annual pricing, so that people can use it how they need to."

"But we will continue to support multiple architectures as the opinions of our customers drive us there," he added.