Equinix continues to leverage its substantial investment in building out the global Equinix Cloud Exchange Fabric by layering on additional services customers can self-provision.

Related: Now That Equinix’s SDN Fabric Is Inter-Region, How Does It Compare to Megaport?

Traditionally, enterprises have had to buy physical appliances like routers, load balancers, and firewalls and paying IT staff to set them up. Through Network Edge, Equinix customers can provision virtual versions of these appliances quickly, offered as services by Equinix partners.

In combination with Cloud Exchange Fabric, the services are especially useful for companies that need such network functionality in places where they don’t have physical hardware. If you host a rack of servers in an Equinix data center in San Jose, California, for example, but need a router in Amsterdam that’s connected to your network, you no longer have to lease space from Equinix in Amsterdam and figure out how to deploy the box there; you can spin up a virtual router that’s hosted in Amsterdam.

Network Edge is yet another way Equinix, a colocation provider, is adding value beyond real estate.

Brian Lillie, the company’s chief product officer, outlined during an Equinix Analyst Day about a year ago a strategy for the Cloud Exchange Fabric that included in-house and partner services. “So, in addition to being able to self-provision circuits and cross-connects, customers will have an 'easy button' to select value-add services," he said, describing point-and-click provisioning tools bought and consumed much like cloud providers’ Software-as-a-Service offerings.

Services supported initially are a virtual router by Cisco Systems and firewalls by Juniper Networks and Palo Alto Networks. Coming up next, according to an Equinix video, are: 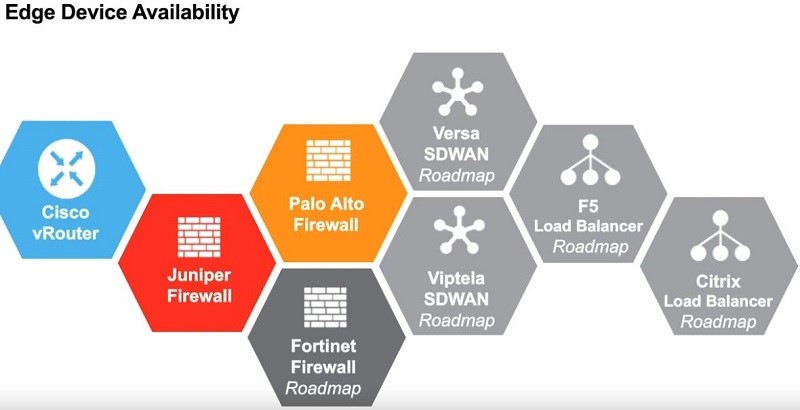 The solution is built on an infrastructure stack that includes virtual compute and memory resources for each virtual device and “various operating systems, hypervisors, VM, orchestration services, and other elements of the stack,” Long explained.

When you order a Network Edge device, you’re not just paying for the software (you can either buy a license from Equinix or bring your own), you’re also paying for all the underlying infrastructure:

Equinix is initially rolling out Network Edge across its largest metros to provide remote access to multiple cloud on-ramps, IT service providers, networks, and customer ecosystems: 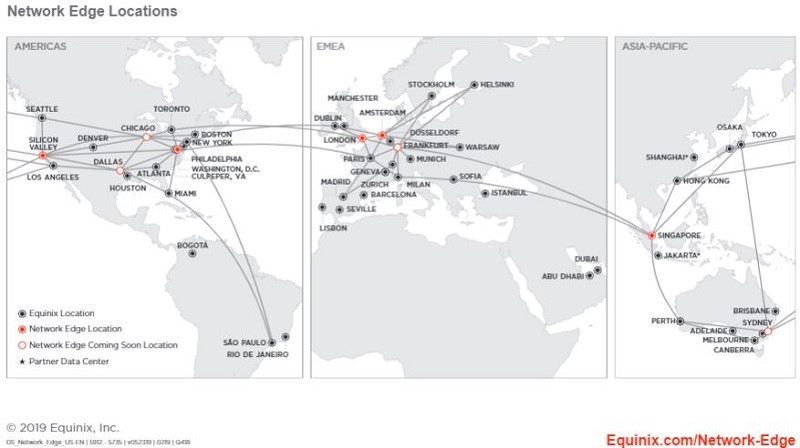 Interconnection has proven to be a fast growing and high-margin business for Equinix.

The business model enabled by software-defined networking is highly scalable and should also deliver high margins for Equinix, since the self-provisioning aspect of ECX Fabric and Network Edge lowers the cost of customer acquisition. Making it easier for customers to expand to multiple regions may also reduce churn. It can also simply the connection of branch office locations to resources available within strategic Equinix data center locations where Network Edge connectivity will be offered.

The Network Edge demonstration video doesn’t provide any pricing information. The speed and convenience of provisioning virtual devices without negotiating with multiple vendors or needing to deploy hardware in remote locations could very well command a premium.

Equinix shareholders have enjoyed an astounding 44.6 percent price appreciation year to date. The company’s shares gained 6 percentage points since the Network Edge announcement on June 4, trading at $510.04 afterhours on Monday.