The emergence of SDN-enabled network fabrics appears to have changed the interconnection playing field over the past year. These fabrics are making it easier for data center providers to offer customers local, regional, and global connectivity options.

This has led investors to wonder if software-defined network fabrics built by the likes of Megaport and PacketFabric, which provide easy access to multiple locations from a single port, will reduce demand for physical fiber cross-connects inside data centers. Industry analysts are increasingly asking this question of late, concerned with a seemingly slowing growth rate of the high-margin product in the third quarter.

Equinix, the global interconnection leader, has close to 10,000 customers colocated in 200 highly interconnected data centers spread across 52 markets. It reported having 294,000 physical cross-connects in its facilities in the third quarter, as well as 13,000 virtual connections on the proprietary Equinix Cloud Exchange fabric by 1,300 customers. 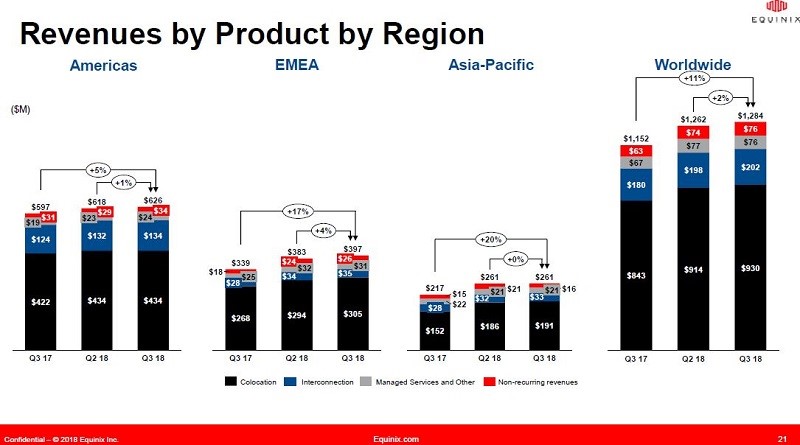 Its interconnection revenue in the Americas grew 8 percent year over year, compared to 25 percent in Europe and Middle East, and 17.8 percent in Asia-Pacific. The slower growth rate in the Americas isn’t surprising – North America, which is responsible for most of the revenue from the region, is the most mature market.

Organic interconnection growth is also facing a headwind from industry migration from 10 Gigabit Ethernet to 100GbE. Existing customers don’t need as many ports after upgrading. This headwind will taper next year, Equinix management said on the third-quarter earnings call.

This week, Equinix VP of interconnection Bill Long and VP of investor relations Katrina Rymill discussed network architecture trends at Barclays Global TMT conference in San Francisco and added some color on the impact they expect interconnection trends will have on business going forward.

"Will the historic high-margin and strong ecosystem enabler of interconnection continue to deliver the same value for Equinix in the future?" asked one Barclays analyst. The secular interconnection tailwinds will continue, but "how it manifests might change a bit," Long responded.

The analyst, Amir Rozwadowski, pressed on: "If we put it more bluntly, some investors are concerned that factors like the rise of software defined networking or interconnection and increased adoption of public cloud architecture will diminish the benefits of direct interconnection. Do you agree with that?"

Here are some highlights from Long’s response:

Enterprise continues to be the fastest growing vertical for Equinix – and public cloud providers are the magnet. Rymill emphasized that cloud adoption by enterprises is a key growth driver for the company.

"Cloud is pulling them [enterprises] out of the basement," Long said. In other words, access to fast, secure cloud on-ramps is drawing new enterprise customers to Equinix, and many of them tend to “land and expand” over time, including both data center capacity and cross-connects.

That public cloud is a friend to retail colocation, not foe, may be counterintuitive, which may be the reason for some of the recent weakness in shares of Equinix and its competitors.

Meanwhile, it remains to be seen how the economics for virtual connections compare with dedicated, physical cross-connects over time. This is something investors should watch closely.